Arnold Schwarzenegger built his career on being the biggest and baddest action hero on the planet, and though he is still The Terminator (he stars in “Terminator: Dark Fate” later this year), the 71-year-old is now showing his softer side by being the face of Stan Lee’s last project.

On Tuesday, Lee’s POW! Entertainment announced the launch of the action-adventure animated series, “Stan Lee’s Superhero Kindergarten.” In it, Schwarzenegger plays Arnold Armstrong, a former superhero who, after decades defending the world, is now working undercover as a kindergarten teacher who is tasked with teaching 5-year-olds with newly discovered super powers how to use them for good when they grow up.

If it sounds a little like Schwarzenegger’s 1990 classic “Kindergarten Cop,” it’s because that’s how Lee got the idea for the show. After numerous talks Lee had with Schwarzenegger, in which the actor opened up about wanting to do something kid-focused, the mind behind such iconic Marvel characters as Spider-Man and the Hulk created the series before his death in 2018.

“Superhero Kindergarten” currently does not have a deal with any network or streaming company to air it, but there should be interest, as along with names like Schwarzenegger (who is also a coexecutive producer) and Lee attached, it has cocreator of “Deadpool,” Fabian Nicieza, scripting the series and Genius Brands International — which is behind the Baby Genius brand, “Llama Llama” on Netflix, and “Rainbow Rangers” on Nick Jr. — coproducing with Lee’s POW!

Business Insider spoke with Schwarzenegger about doing something geared toward kids for the first time in his career, as well as why “Terminator: Dark Fate” will get his beloved franchise back on track, and his reaction to thatsurprise drop-kick he got while attending his sports festival in South Africa.

Jason Guerrasio: Before we get into “Superhero Kindergarten,” I have to know: Any after-effects from that drop-kick that went viral?

Arnold Schwarzenegger: To me, it’s still kind of stunning. I thought some kid kind of tripped and fell onto me or something like that. I almost didn’t feel it, it was kind of a push. And since then, everywhere I go people are asking if I’m okay. Thousands of people are writing to me. It’s pretty crazy the way this stuff works.

Guerrasio: It’s never a dull moment for you.

Schwarzenegger: But if I would get that kind of attention for fighting, say, gerrymandering I would be happier.

Guerrasio: So you and Stan Lee got to talk about “Superhero Kindergarten” before his passing, right?

Schwarzenegger: Oh yeah, years before his passing. It was a coincidence. We would get together every so often and talk about ideas and projects. And he asked me, “What is your ultimate dream project?” And I said beside doing more “Conan” and “Terminator” movies, the movie that I always wanted to do a sequel of was “Kindergarten Cop.” And he said that he loved that movie. I told him I would love to do more shows for the kids. 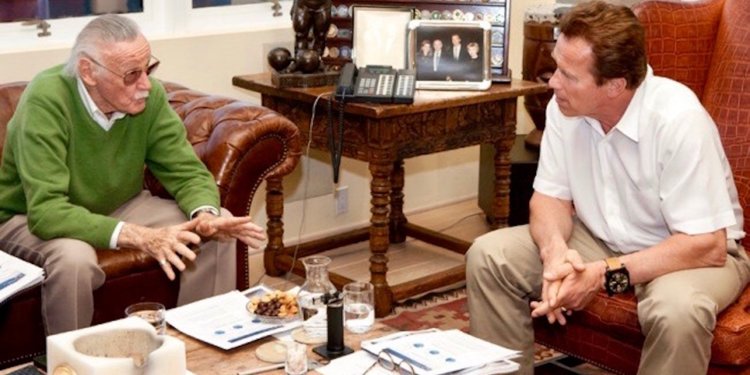 (L-R) Stan Lee and Arnold Schwarzenegger.POW! EntertainmentIt was always difficult for me. When I was the action hero in the ’80s and ’90s, they wouldn’t allow me to do any comedy or anything for kids. They were like, “No, we know we are going to make money with you if you do action movies.” So literally for “Twins” I took no salary, I just wanted to give it a shot. And it just happened to be my first movie to make $100 million domestic. So they realized that it works, Schwarzenegger can cross over.

So I told Stan that story, and that I was always frustrated that I couldn’t do more kids shows and cross over more. And there was a look in his eyes. I could see him daydreaming for a few seconds.

Guerrasio: The wheels were turning.

Schwarzenegger: Exactly. But he basically said, “Let me think about that, maybe I can come up with something.” And that was it. And then I didn’t hear anything for a long while and one day he called me back and he said, “I have an idea that’s exactly what you’re talking about, but how about putting my spin on it?” And I said, “What’s that?” And he went, “Arnold, c’mon, you know, superheroes!” And he told me how I would play someone that no one knows was a superhero and I’m a teacher, just like in “Kindergarten Cop,” but my kindergarteners have super powers and they are going to grow up and be the protectors of the planet. My character has to teach them all the important lessons. I told him it was fantastic, and he said, “Well, you’re talking to Stan Lee.” [ Laughs.]

It was crazy Stan passed away and didn’t see this last idea that he had really flourish. So we now have to do it justice. 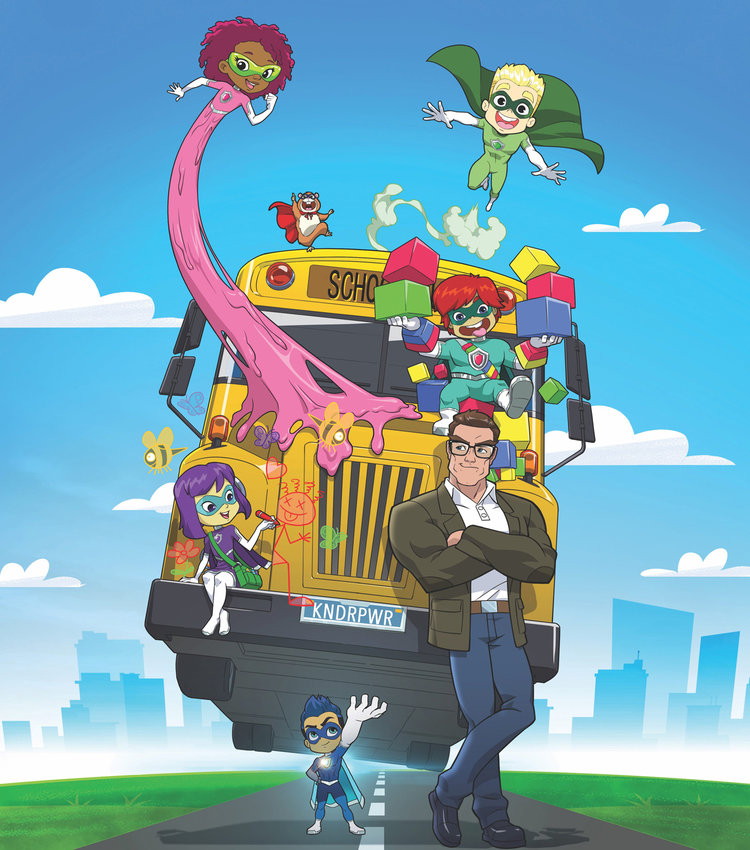 Guerrasio: I was thinking back, is this the first time you’ve done an animated show?

Schwarzenegger: It’s the first time I’ve done a TV animated show, the whole show. It’s also the first time that I’ve done something that is directly for kids. Most of my comedies are kind of geared to adults too, like “Twins,” “Kindergarten Cop,” “Christmas in Connecticut” (which Schwarzenegger directed), “Jingle All the Way,” “Junior.” This is specifically for the kids audience.

Guerrasio: Though you haven’t been able to do a lot of kids-focused projects, you have had a focus on physical fitness for the youth going all the way back to H.W. Bush being in office. With your decades of knowledge, what does a show like this need to get through to not just kids but adults about the need for their kids to be active and not always on devices and playing games?

Schwarzenegger: That’s what George Herbert Bush was talking about, “the couch potatoes,” and how do we get the family as a whole off the couch? So this show will be about fitness but it will also have action and discipline, being inclusive, different things that I stand for. Teaching them how to use their powers for good. Indirectly there will be a message, but it will be very entertaining.

It’s like when James Cameron did the second “Terminator” movie, he didn’t go and say this will promote women power, he wrote it that way and by the end you could tell that Sarah Connor was the force that beat the Terminator. So you can get a message across without forcing it down people’s throats.

Read more: The Elton John biopic “Rocketman” is a worthy celebration of his music and a look at his troubled past

Guerrasio: And it sounds like Stan Lee is going to make a cameo in every episode?

Guerrasio: How did that work? Did he do the voice work before he died?

Schwarzenegger: Well, as you know it’s a tradition in the Marvel movies of him showing up, and sometimes you needed to see it a few times to realize that was Stan in the background. So that’s how this is going to be. He wanted his appearances here for this to be very subtle. 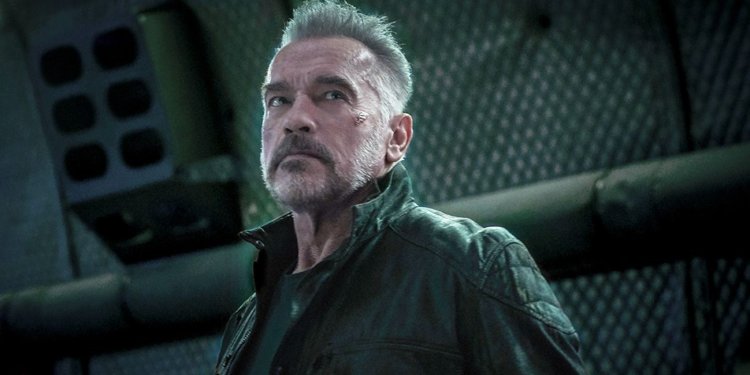 Arnold Schwarzenegger as The Terminator in “Terminator: Dark Fate.”Paramount

Guerrasio: Last we talked you said that the interest in still doing The Terminator character all these years later is its vulnerability when facing the newer forms of Terminators. Will that vulnerability be present in “Dark Fate”?

Schwarzenegger: You will see it. But I don’t want to get too much into that at this point. I think the studio has learned from the last time that they gave too much away of the story, so they want to keep it more under wraps this time around. What I will say is I play a great T-800 again and it was fun to have Linda Hamilton back. The new team was willing to do the work in preparing. They worked their asses off in the gym, I helped them with their training, a lot of them. I was happythe trailer that came out had a huge impact and people responded positively.

Guerrasio: And James Cameron is back as a producer!

Schwarzenegger: Cameron was a fanatic about this. He wanted to make sure we were bringing it in the right direction. He’s a control freak.