PARIS — Where can American artists direct opera at the moment? For the puppetry prodigy Basil Twist, the answer was France.

At the Opéra Comique in Paris, Twist has been busy readying a new staging of Jean-Joseph de Mondonville’s “Titon et l’Aurore,” an 18th-century Baroque opera. Although the French government’s current pandemic guidelines have forced all theaters to close to audiences, “Titon et l’Aurore” is set to have a virtual premiere on Tuesday on the streaming platform Medici TV, and will be free to watch for three months.

“Titon et l’Aurore” is a three-act pastoral fantasy about a shepherd, Titon, who is in love with Aurora, the goddess of light. Other gods and goddesses try jealously to interfere, but the couple triumphs. While the original premiere, in 1753, was considered a success for its French composer at a time of intense rivalry between the French and Italian operatic traditions, it has seldom been revived. 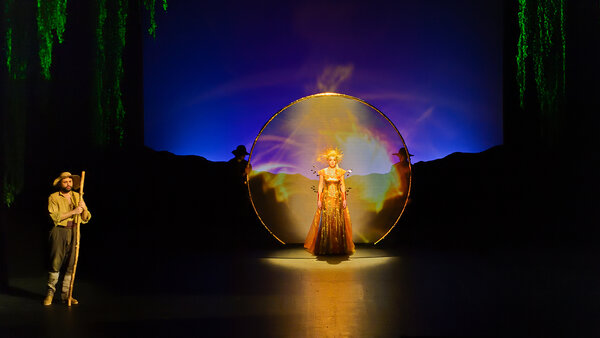 At the Opéra Comique, “Titon et l’Aurore” will be conducted by the American-born William Christie, who has championed the work of Mondonville for several decades with his ensemble, Les Arts Florissants.

Twist, 51, has broken new ground for musical puppetry with his imaginative, poetic designs. The worldwide success of his 1998 underwater puppet show, “Symphonie Fantastique,” led him to begin the Dream Music Puppetry program at the Here Arts Center in New York. His work has spanned opera, ballet and Broadway shows like “Charlie and the Chocolate Factory,” as well as pure puppetry productions set to orchestral music, like “Petrushka” and “Rite of Spring.”

And Twist’s first appearance as a director in France was a long time coming.

He remains the only American to have graduated from the École Nationale Supérieure des Arts de la Marionnette, a renowned puppetry school based in Charleville-Mézières, in eastern France. In 2011, Twist was the designer and associate director for a Comédie-Française production of “A Streetcar Named Desire,” directed by Lee Breuer, who died this month. (Twist is dedicating “Titon et l’Aurore” to Breuer, a major influence and mentor.)

A few days before the livestream of “Titon et l’Aurore,” Twist spoke in the foyer of the Opéra Comique in Paris. The conversation has been edited for clarity and length.

How did you approach the mythological characters of “Titon et l’Aurore”?

I’m a different kind of director: I want to use my craft to make the singers bigger, more fantastical. The characters aren’t puppets here, but the singers have puppeteers — most of them from my former school in France — who attend to them, a little posse who’s following them around. Aeolus is the god of wind, for instance, so there is a lot of silk and movement around him. Pales is the goddess of livestock and shepherds, so I had this idea of a dress that’s immense and made of sheep. It’s like they’re part of her body.

What made you say yes to a Baroque opera?

I’d been in conversation with the Opéra Comique for some years, and then it fell away while they had renovations. When they reached out, in January of last year, they weren’t sure whether it would be this Mondonville piece or a double bill of Rameau. But it was going to be with William Christie, so I said yes immediately.

William Christie is known to be a demanding conductor …

I met him on the day everything shut down in New York, last March. I remember being nervous, but he was very warm. I was concerned that he might be a little tough on things like noise onstage. He hasn’t yet — I think I was worried enough about it that I made sure it didn’t cause problems.

He’s gotten more intense in the days before the premiere. I was pleased to see that because I actually want the rigor, and I had steeled myself against it.

What was your experience of the early days of the pandemic?

I actually had a really serious injury last February. I cut my arm really badly, and it was very scary for me as a puppeteer. So I was already in my own sort of lockdown, my own existential health crisis. Like any freelance artist, I was afraid to cancel projects that I had — I need the work.

And then everything was canceled, or postponed. It allowed me to heal, so it was quite miraculous. I’m much better, even though I’m still feeling some effects.

You worked on “Titon et l’Aurore” with a crew of technicians in an empty New York theater last summer. What was the atmosphere like?

I’ve worked on and off at the Abrons Arts Center in the past, and they had no programming. People were still concerned to be inside a space together. I brought people in and we slowly figured out how to work in these conditions.

I was really aware of not pushing them too much. I have a habit of pushing people beyond their comfort level, because I’m always asking them to do something unusual, whether it’s singers or dancers.

Have puppets taken on a new meaning this year, while everyone was scared to work with other human beings?

Not really, ultimately, because you’re still working together. Puppets involve people — in fact, the way I do it, they involve lots of people, who sometimes have to be really close together.

How have you found the mood in the French arts world, compared to the United States?

The reality in the United States is so different from France: Everybody’s unemployed, no one has anything to do. We couldn’t believe that the Opéra Comique started doing performances in June. It’s hard to put myself in the shoes of the French people who say, ‘This is really bad, the cultural sector has closed, and we don’t know when it will open.’ In the U.S., we’ve been closed since March. It’s just totally incredible that we’re putting on an opera here.

A film version of “Symphonie Fantastique” premiered in 2019, and now “Titon et l’Aurore” will be streamed. How do you feel about your work being filmed?

I’m not an expert for film, so I just have to trust someone else. I think the distinction with puppetry for the stage is that there’s a complicity with the live audience. They are invited to use their imaginations, they can see the puppeteers at work. In film, we’re used to special effects being perfect, so we don’t get that same feeling of the humanity behind it.

What do you hope people will take away from “Titon et l’Aurore”?

The show is about love. It’s not especially heavy or edgy or hard: There’s a lot of joy, a lot of color and very simple stagecraft. And I hope that people take that. I want them to feel the good fortune that we all have to be able to create together.