Before Robert Pattinson and Ben Affleck and Christian Bale, there was Kevin Conroy and the Gotham City of “Batman: The Animated Series.” The Warner Bros. series, which ran from 1992-1995 on Fox Kids, arrived on HBO Max in January. A Saturday morning cartoon that was also a super-stylized foray into the noir genre, it brought the Dark Knight version of the caped crusader to television, redefining a formerly earnest, occasionally silly TV hero and foreshadowing the ever darker iterations to come.

“Batman” was both timeless and incredibly specific, creating a sense of a fully filled-in world. Its wonderfully perplexing, anachronistic landscape combined Art Deco accents with sleek supermodern architecture. Cars that looked cribbed from the 1930s and ’40s shared a world with gadgetry that tiptoed into the realm of steampunk.

Batman has been swinging around since 1939, when he first appeared in Detective Comics, but he shot to popularity in the 1960s with Adam West’s relentlessly campy “Batman.” (I personally adore that time capsule of a series). During the 1970s and ’80s, Batman appeared in animated shows like Hanna-Barbera’s “Super Friends,” “The New Scooby-Doo Movies” and the short-lived “The New Adventures of Batman,” from 1977. These Batmen, who were often voiced by West, were direct descendants of the 1960s series.

The viewing public got its first look at a moody Batman when Tim Burton stamped the bat with his signature gothic style in “Batman” in 1989. But the haunted, violent version of the character that dominates pop culture now sprang largely from the comics writer Frank Miller, whose groundbreaking work in the 1980s, including the series “Batman: The Dark Knight Returns,” is an obvious influence on “Batman: The Animated Series.”

Unlike his TV predecessors, the hero in “Batman: The Animated Series,” which debuted in September 1992, fought real crime and took himself seriously. The show featured mobsters with guns and knives and tackled difficult themes involving murder, revenge, poverty, greed, exploitation and more. Some episodes, like the stunner “Perchance to Dream,” in which Batman is trapped in a dream version of his life where he isn’t the dark hero, dive into the dark psyche of the character.

(It could have skewed darker: One episode script, about the gun that killed Bruce Wayne’s parents, never made it to the drawing board because the network found it too bleak, according to the writer and producer Alan Burnett.) 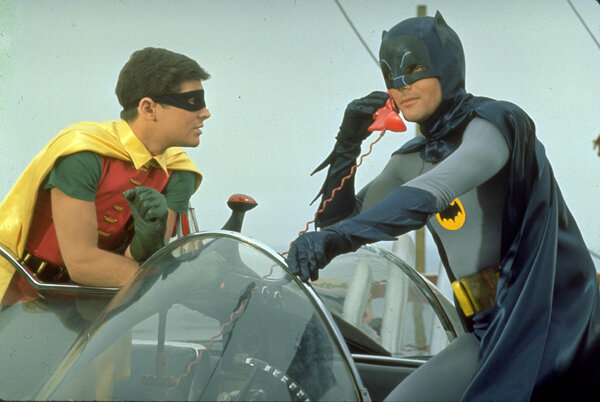 Not quite the typical Saturday morning cartoon fare. But it was that, too: Despite its adult themes, “Batman: The Animated Series” didn’t make the mistake many DC properties have made in overdoing the brooding antihero bit. Rather, the series held onto its sense of humor in the banter between Batman and his loyal butler, Alfred; in Batman’s many flirtations; and his deadpan interactions with his antagonists.

As in most “Batman” iterations, the villains were what shined most. Mark Hamill’s rollicking laugh in his performance as the Joker became one of the character’s most definitive qualities. The series revamped some villains from the comics, like Mr. Freeze, who was given a sympathetic back story. (A few years later, Arnold Schwarzenegger offered a saccharine take on the character in the widely maligned “Batman and Robin,” from 1997.) It also introduced a villain that has become fundamental to the Batman mythology, Harley Quinn, who somersaulted her way into the canon and, decades later, into her own irreverent television series and film.

Kevin Conroy’s voice work showed a range not every actor in the role has been able to replicate, distinguishing Conroy, for many, as the one and only true Batman. (He went on to voice the character in nearly every subsequent DC animated spinoff, including the beloved 1993 film “Batman: Mask of the Phantasm” and the stylish cyberpunk sequel series, “Batman Beyond,” both on HBO Max.) Stately without being stiff, playful without being juvenile, Conroy’s performance captured the gravitas of the character without ever losing track of the fact that he’s a billionaire playboy who runs around in bat-tights at night.

“Batman: The Animated Series” was canny about how it mined the hero’s lore. It adapted characters and plots from the comics, drew tonal inspiration from the Burton films and then went on to influence Batman properties that followed.

Batman is an onscreen staple at this point: Pattinson’s “The Batman” arrives next year, but Affleck’s Justice League Batman and Bale’s Batman are hardly distant cultural memories (not to mention Will Arnett’s sidesplitting Lego Batman).

But years before Disney and Warner Bros. executives even dreamed of streaming platforms and cinematic universes, “Batman: The Animated Series” pointed the way forward for what was to become one of world’s most ubiquitous franchises. While some bats will fly off into the caverns of pop culture past, forgotten and disregarded, this one will remain one of the best and most influential incarnations of everyone’s favorite emo bat hero.