Audre Lorde isn’t going to save you. She’s too busy resting in the heavens of legendary artist-activists to be your personal Black feminist guru. That’s what a teen gamer named Jonas finds out in the Civilians’ well-intentioned but clumsy “Black Feminist Video Game.”

Jonas (Christon Andell), our Player 1, is a biracial, autistic high school student with a single working mother (Constance Fields) who has tried to teach her son lessons from the great Black feminists, like bell hooks. However, Jonas learns how hard it is to internalize those lessons when a girl he’s dating, Nicole (Starr Kirkland), breaks it off. In an attempt to win her back, he, with the help of his gamer friend Sabine (Kyla Butts), seeks guidance from an old gift from his mother: the 2-D video game that gives the play its title.

Written by the poet Darrel Alejandro Holnes and directed by Victoria Collado, “Black Feminist Video Game” incorporates live performances via Zoom, actual video game footage and some light audience interaction through YouTube chat. We watch Jonas as he conducts livestreamed video diaries — and Andell does interact with the audience minimally, responding to audience comments and asking for advice, though the improvised prattle slows the show’s pacing and feels inorganic.

The script, too, labors through attempts to smoothly and naturally be its most intersectionally woke self, but diversity feels downgraded to a checklist. (Black? Mixed-race? Queer? Autistic? Check, check, check, check.) And when it comes to the play’s message, with Jonas slowly understanding when he’s mansplaining and failing to truly listen to and respect Black women, “Black Feminist Video Game” gets unbearably preachy — and the performances don’t do much to help. 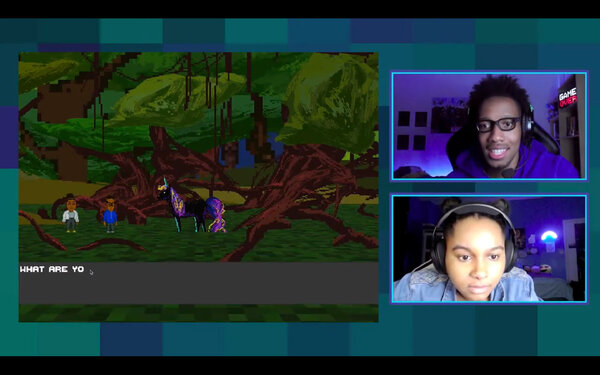 At least there’s the game itself, created by Ché Rose and Jocelyn Short of Cookout Games, which is a fun, pixelated blast from the past. Adorable avatar versions of Jonas and Sabine run through the levels: the Forest of Feminist Angst, the Coven of the Many-Faced Mirrors, the Realm of Colorism, and Peak Patriarchy, where waits the final boss. Just like the rules of the game — which is psychic, by the way — confound Jonas, so, too, was I confused by its logic, even as Lorde showed up to impart wise words to our wannabe Black feminist protagonist.

Though a notoriously bad crash-and-burn gamer myself, I enjoy the idea of them — video games, but also games built into theatrical experiences, especially those related to race. The tension between politics and play is exciting — think “The Colored Museum,” “Underground Railroad Game” and “Black History Museum.” I even thought of Kekubian Assassin, a real mobile game based on an episode of Terence Nance’s HBO series “Random Acts of Flyness,” in which a Black woman plays a first-person-shooter-style game where she fights back against racist and sexist street harassment. “Black Feminist Video Game” aspires to this same degree of poignancy and ingenuity, but despite its cute gameplay, it can’t get past Level 1.