Mister Rogers was wrong: It isn’t always a beautiful day in the neighborhood.

Community is tricky, especially when people’s definitions of it — in their families or circle of friends, in their neighborhood, in their nation and beyond — vary so dramatically. No wonder there’s conflict among the residents of Oak Street in “Block Association Project,” a new interactive show from the Actors Theater of Louisville that works hard to usher us into its fictional suburb, but struggles to articulate its thoughts on political action and democracy.

Meet your new neighbors: Elena (Ceci Fernández), a self-interested real estate agent; Aneta (Jane Park), a scholar who struggles with social cues; Emma (Anne-Marie Trabolsi), a pedantic uber-liberal student; Beth (Myra Lucretia Taylor), a wholesome peacemaker; Ryan (John McGinty), whose dog is a cause for discussion; George (Nathan Darrow), a cynical writer who doesn’t want to be bothered; and Rachel (Lauren Lane), the well-meaning self-appointed leader who wants to keep things light and not get political.

We’re all gathered on Zoom to discuss how to spend $10,000 in community funds. Easy enough, right? But a conversation about the practicality of a community garden versus a dog park soon spins off into a debate about what the neighborhood stands for, how inclusive it should be and whose values should be represented.

Written by Michael Yates Crowley and directed by Michael Rau (the founders of Wolf 359, who most recently collaborated on the immersive workplace drama “Temping,”) for the 2021 Humana Festival of New American Plays, “Block Association Project” actually begins before the Zoom meeting, via a series of association emails that the audience can choose to receive in advance. In them, Aneta sends links to articles about dog attacks, Rachel’s son, Teo (Joe Montoya), interjects to encourage us to donate to the aid organization Border Angels, and George churlishly asks to be unsubscribed.

It’s an inventive approach, and for me, quite a surprise to see threads from the residents of Oak Street among press requests and emails from editors in my inbox. It’s not simply the novel nature of the form, however; the emails are a subtle mode of character-building, right down to their signoffs (Elena has a professional signature for her real estate company, while Beth’s is a call to “Think Green”), which made encountering them on Zoom that much more satisfying.

I can’t say the same for the full performance, however. Granted, I have never been one for community gatherings, so an experience that strong-arms audiences into interacting isn’t my cup of tea — especially when it’s deployed more for novelty than narrative development.

So when discussions fell apart in the meeting, the performers turned to the audience, dividing us into breakout rooms where they moderated short (about six minutes each) debates about the topics on the table, including the association’s leadership and whose votes should be represented. Intermittently we were also asked to participate in Zoom polls, all to foster our investment in this fictional neighborhood.

At times these felt like a schoolteacher’s last-ditch attempts to get her class more engaged, when they seemed positioned to act like an urgent call for political involvement — perhaps even an indictment of those who wish to be quiet when urgent action is required.

However, the 90-minute show struggled to balance audience participation with its scripted characters and themes. The antisocial writer and the self-serving real estate agent, among the others, feel like no more than petty character types. Almost every character has a breakout moment — a turn in the conversation that leads to a reveal, like Ryan’s story about how he got possession of his father’s dog, and Aneta’s account of her family’s treacherous immigration journey — that is meant to give us something hearty to chew on.

The performers labor through those emotional spotlights; Taylor and Lane are amiable but flat, and Trabolsi and Darrow are suitably obnoxious but wholly unsurprising. (Props, though, to the show for being accessible in a way many aren’t, using multiple American Sign Language interpreters, directed by Alexandria Wailes.) 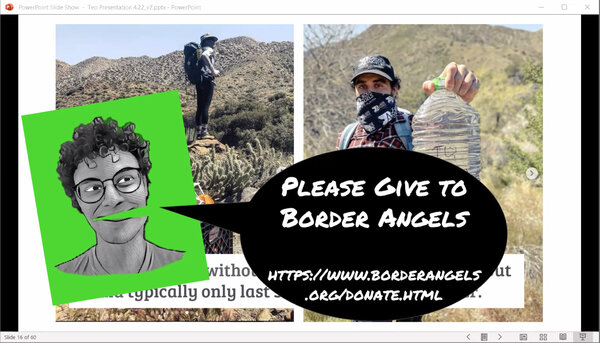 Caught in the muddle of the script are references to the crisis at the U.S. border with Mexico, a debate on the definition of “refugee” and allusions to common hindrances to a working democracy — there’s even a protest of an election result, and a motion to secede. The play uses its small-town community affairs to nod toward the capital-P Politics of our nation right now, but just like Rachel, it’s hesitant to get into specifics and confront the viewpoints and practices that have bolstered our divisive, inequitable body politic.

Then again, the show did mint some stars: audience members who turned out to be terrific at improvising on the topics at hand.

In my group a couple with a new puppy named Sato were vocal about what they thought community meant and how they thought the Block Association should work. And a woman named Jane, who spoke eloquently about the difference between leading and facilitating, was enthusiastically nominated by my group to be the new head of the Block Association and successfully voted in.

Unfortunately, the last several minutes of “Block Association Project” unraveled into what I’ll call a final act phantasmagoria — a move I’ve seen in many shows that aim to break from reality via a poetic unpacking of themes that were never fully tackled.

Such purposefully jarring flights of fancy can actually drag a production down, like a cruise ship anchor yanking on a sailboat. In “Block Association Project” it’s a character’s soul-searching monologue (which features both Drake and an Aztec god, by the way) that goes on way too long.

Were I to vote on a future for “Block Association Project,” I would urge more precision and a more confident marriage between this community’s banal civics and campaigns with the current troubles of American society. After all, these are the kinds of discussions we’re all now used to having. But, moving on: What’s the next item on the agenda?

Block Association Project
Through May 1; actorstheatre.org