BERLIN — In a country where many comedians dress to play a character — a sleeveless pullover for a nerd, a pink tracksuit for a working-class housewife — Felix Lobrecht’s clothes are all his own.

His gold chains, designer T-shirts and expensive sneakers make the 32-year-old standup look like a rapper, but his swagger onstage is no act. He’s just as confident without a microphone in hand.

In the six years since he started doing standup, Lobrecht has become one of the most famous comedians in Germany by ignoring the comedy scene’s traditional gatekeepers and routes to success.

He has amassed his own following through social media (with nearly 900,000 followers on Instagram) and a weekly podcast, which is the most popular in the German language (and the only non-English podcast to make it into Spotify’s worldwide top ten). Last year he won the German Comedy Prize, after it switched from a jury to a public vote, and when the dates for his first arena tour were announced, just before Germany went into lockdown last March, tickets sold out overnight.

Success has made Lobrecht rich, and he’s not afraid to show it, something that successful entertainers here often avoid. He wears a big gold watch and likes to talk about his new Mercedes; his carefully curated Instagram makes him look like a pop star.

Yet his roots are more modest: He grew up the eldest of three children, raised by a single father, in an impoverished area of the Neukölln district in Berlin.

“I grew up in Neukölln, and now I wear a Rolex,” said Lobrecht. “That in itself is a hip-hop story.”

Onstage, Lobrecht is a street-smart misanthropist, who speaks in a working-class Berlin accent and mocks political correctness. To open his latest Netflix special, “Hype,” he riffs about his annoyance at disabled parking spaces; in many routines, he puts on the accents of the first generation Turkish and Arabic immigrants he grew up with.

But the Lobrecht that millions of listeners to his weekly podcast know is progressive, thoughtful and generous. He has supported refugee organizations and groups that help young people get out of far-right gangs and rails against wealth inequality.

Lobrecht dismissed the suggestion that the two sides of his public persona somehow contradict each other, calling them “facets” of his genuine self.

“It’s two sides of the same coin: I did grow up on welfare in Berlin, on the one hand,” he said; “On the other hand, I also did my university studies,” he added. “That also had an influence on me.”

Lobrecht studied political science at college, in Marburg, central Germany, and got involved in the slam poetry scene around that time. Although he found many of his fellow performers pretentious, he said, he started logging time in front of an audience, working on timing and stage presence. (Even as a poet, he was funny.)

The greatest challenge in his transition to standup, Lobrecht said, was to come out and call himself a comedian.

“It was a big step to come out and say ‘I’m a comedian now’ because it has a bad image,” he said. “German comedy at the time — in my eyes at least — wasn’t very good,” he said, before demurring a little: “At least, it wasn’t something that people of my generation really consumed,” he added. 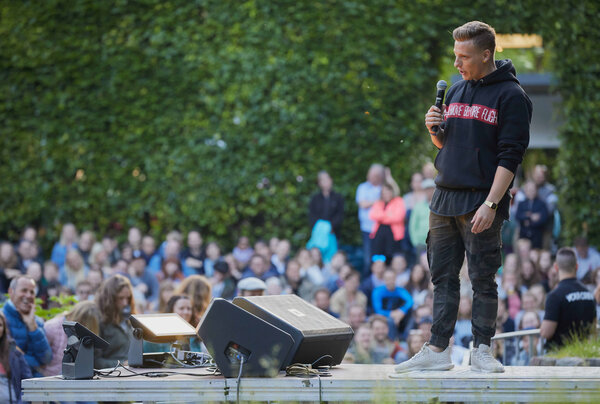 Kawus Kalantar, a standup comedian who has opened for Lobrecht, said “German comedy has reached a tipping point and I think we’re seeing a transformation. But before that, it was just embarrassing.”

Typically, German comedians come up through the rigid system of late-night shows on public TV and comedy festivals. In recent years, though, there has been a shift: In Berlin and other cities, standup clubs are popping up, and TV is losing its power to anoint stars.

“I was lucky — I wasn’t the only one who was tired of how comedy worked in Germany,” said Lobrecht. “And when the chance came, I was ready.”

When he won the comedy prize last year, Lobrecht offered some advice to young comedians. “I want to encourage you not to sign on with agencies too quickly,” he said on live TV. “We were able to do it independently.”

Elizabeth Prommer, a media science professor at the University of Rostock, who has written a book on German comedy, said, “YouTube and the recent podcasting craze have allowed German comedians to be a bit more independent from TV these days, which used to have a real gatekeeping function in the country.”

She added that, while this shift can benefit comedians like Lobrecht, it doesn’t guarantee access to all new comers. Women, for example, are still underrepresented, she said.

“It’s not like Germans had no humor,” said Prommer. “But what’s new now is having young comedians simply talking about their lives, about things they experience walking down the streets of Berlin.”

Lobrecht’s sets hinge on observational humor, meandering riffs and well-timed callbacks. He often laughs at his own jokes, as though he’s telling them for the first time, which gives his shows a sort of intimacy, even when there are thousands in the audience. It’s a style that can feel more like contemporary American standup than the work of his fellow German comics.

“One thing I credit my fans with — and I think it’s the same in American standup — it’s all meant to be funny, it’s not some political speech,” Lobrecht said. “I think you have a certain freedom when people know that.

German audiences, however, don’t always get it. In January, Lobrecht made headlines after making jokes about a fire in a German zoo that killed 30 monkeys. Bild, a tabloid newspaper, accused him of mocking the dead animals, and Lobrecht was criticized by animal rights groups.

Although Lobrecht follows American comedians like Bill Burr, Sarah Silverman and Dave Chappelle, he mostly watches them for pleasure, he said, and doesn’t try to copy their techniques.

Looking abroad had raised the standard in German comedy, he said, because young English-speaking and social media-connected viewers now had access to so much more material.

“Today the competition is much fiercer, because everyone is just two clicks from the best stand-up comedy in the world,” he said. In Germany, at least, Lobrecht is a fierce competitor.