Brooklyn Beckham’s ‘Michelin style’ Sunday beef dinner tutorial has been roasted (ahem) by some viewers for being too rare – and too buttery.

The aspiring 23-year-old chef, who has previously caught heat for some of his dishes, shared his latest cooking video on Wednesday, joined by ex-Michelin cook Kevin Lee.

The pair laboured in the kitchen to serve up a dry-aged rib roast, reverse seared, alongside ‘extra-crispy’ roast potatoes, Yorkshire pudding, glazed carrots and a madeira and porcini mushroom gravy.

However, as we’ve all now learned from the internet, not everyone’s a fan, and Brooklyn’s efforts didn’t go down too well with some.

Followers on social media took against the meat being served rare, branding it ‘very raw’ and slammed the ‘reckless amount of butter’ being used, with several calling it ‘a heart attack on a plate’.

Brooklyn, who was asked what he does for a living last summer by a TikToker who spotted him out driving a burgundy McLaren P1, and Kevin started off by generously salting the beef before slathering it in two full blocks of butter, mixed with garlic, rosemary and thyme, and placing it in the oven. 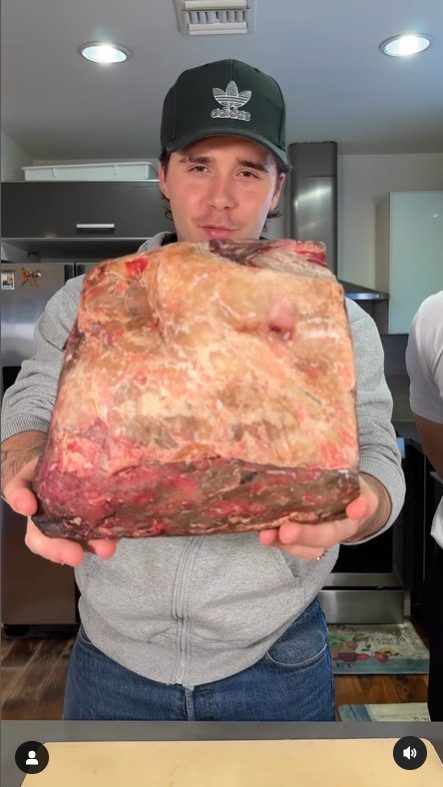 The potatoes were then added to a pool of oil and beef fat, while the gravy was started off with a large dollop of butter and the roasted carrots were cooked in – yes, you guessed it – both oil and butter, alongside a carrot juice glaze.

The Yorkshire puddings, which Brooklyn quite rightly insisted were a staple ingredient of a roast beef dinner, also featured a significant amount of oil in the bottom of each individual pudding pan.

After the beef was deemed finished and sliced into, Brooklyn proudly showed off the results of the meat, cooked safely but done as rare, to the camera before excitedly plating the meal up.

‘Just like how I have it in England. The best Sunday roast!’ he enthused, after trying a bite.

Some fans were not on board with the results though, especially when it came to how well done the beef was.

‘Might as well bite the cow while it’s grazing,’ commented one person, while another claimed: ‘A good vet could bring that back to life.’

Others branded it ‘barely cooked’ meat and ‘very raw’, adding to the fiery conversation around how people like their beef done.

Hey, we all have our opinions, but the Michelin folk veer towards the rarer side of things.

Others were taken aback by the amount of butter used in the cooking process.

‘That’s just a reckless amount of butter for that much meat,’ wrote one.

Another joked: ‘Recipe ‘how to cook butter [sic]’’ and ‘In conclusion: butter.’

Brooklyn’s beef and trimming did attract praise as well though, with one follower saying it ‘looked beautiful’ and another posting: ‘Omg I’m salivating.’

‘This looks yummy 😋 and obvs u’re not consuming ALL of the butter so shut up geeez [sic],’ pointed out one person.

Photographer-turned-chef Brooklyn, who went rogue on Thanksgiving by cooking fish and chips, has already hosted a Facebook eight-part series showcasing his love for home cooking, Cookin’ With Brooklyn.

His bagel episode attracted a lot of attention after it was claimed it took a reported crew of 62 people to film him – and that it cost a staggering $100,000 (£74,000) to make, while he also previously stirred up a fair amount of fuss by making an English breakfast sandwich on the Today Show.

It’s said he’s now filming a new docuseries in which he’ll be cooking on the line in established restaurants.