Christie Brinkley and 23-year-old daughter Sailor Brinkley-Cook are the most stunning mother-daughter duo. Their latest set of photos shows that the two are each other’s twin — and more proof that the supermodel is aging backward — as the family members got together over the weekend to celebrate the work of designer Michael Kors. 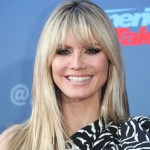 Brinkley shared a carousel of images on Instagram, but it’s the first photo that had us right from the start. The All-American beauties share the same warm smile, beautiful blue eyes and adorable matching hairstyles, complete with fringe bangs. She captioned the photos, “Celebrating 40 years of the iconic American Style of the adorable legend @michaelkors in the chicest garden of hosts extraordinaire Jon and legs for days @tizzielisch and co hosted by the lovely and glamorously cool @naomiwatts plus strawberry shortcake all on a gorgeous Summer night! Thank you all for including @sailorbrinkleycook and me! PS Thank you @owengould for our new haircuts!”

Brinkley has always been close to her three children, daughter Alexa Ray Joel, 35, from her marriage to singer Billy Joel, Sailor from her marriage to Peter Cook, and son Jack Brinkley-Cook, 26, from her marriage to Richard Taubman, who was then adopted by Peter. But the kids have always tried to create an identity outside of their famous mother, especially for Sailor, who gets the mini-me comparisons all of the time. “I’m not the mini-Christie Brinkley,” she told Hamptons magazine. “I’m myself.”

The mother-daughter team is so close that when Brinkley was injured during rehearsals for the 28th season of Dancing with the Stars, it was Sailor who stepped in to replace her mom. “Sailor always meets her challenges head-on and realized she did not want to be defined by her fears,” Brinkley wrote on Instagram about her daughter. “With just hours to learn my routine she is turning defeat or should I say two left feat (sic) into her own victory of courage.”

Now, that’s what we call teamwork!

Before you go, click here to see kids who are following in their supermodel moms’ footsteps.