Being successful on YouTube as a creator can be a challenge, but one thing is certain: you need a strategy.

YouTube star Collins Key, who got his start on “America’s Got Talent” in 2013 performing magic at 16 years old, now has a YouTube channel with over19 million subscribers. Key, and his brother Devan, grew their channel from 2 million to 19 million subscribers in a little over 2 years.

In an interview with Business Insider, Collins shared his tips for growing a YouTube channel and gaining millions of views per video.

Collins was the first magician to reach the finals of AGT. While on AGT, Collins said he “went all out on social media,” building up a following and connecting with fans from the show. He would post hour-long live streams, weekly YouTube videos, and kept up with his Instagram and Facebook pages daily. After the season, he toured with Demi Lovato on her Neon Lights tour, performing magic.

After the tour, Collins said he was approached by several traditional media agents calling him a “star” and saying he could “forget social media and YouTube” because he was going to be huge. But that soon died down and Collins said he experienced six months of silence. In 2015, he officially decided to focus on his YouTube channel, which at the time had 90,000 subscribers.

When there’s no TV executive to call the shots, Collins said you need to look to the data yourself, because “data doesn’t lie.” With his family, the Keys took a data-driven approach to YouTube and he said that’s ultimately what grew the channel to what it is today.

Yet each month, the brothers only upload 1 to 2 videos, compared to the weekly, or sometimes daily, video upload schedule typical to many YouTube creators.

Collins said as he focused on YouTube as his main outlet, he began to measure the overall success and performance of each video, using the data provided by YouTube. Collins looks closely at his videos overall watch time, which is the length a viewer watches a video for, and its click-through rate, or percentage of times a video’s thumbnail image is clicked.

These factors are taken into account by YouTube’s automated algorithm, which helps a video’s overall reach by picking it up and suggesting it to users. They also help determine whether a video will make money through Google’s AdSense program, and how much it’ll earn. Google’s AdSense alsotakes into account viewer demographic.

See Also: YouTube star Shelby Church breaks down how much money a video with 1 million views makes her

“To really be successful on YouTube, you need to understand how the platform works, the data of it, how to algorithm works, how AI promotes the content,” Collins said. “All of the technical aspects of the things that make content blow up on YouTube.”

YouTube has promoted many of the Collins’ videos online and his videos are often displayed on YouTube’s trending page.

But Collins said that measuring data on its own isn’t enough to be successful, and that it is also important to figure out new ways to grab a viewer’s attention. 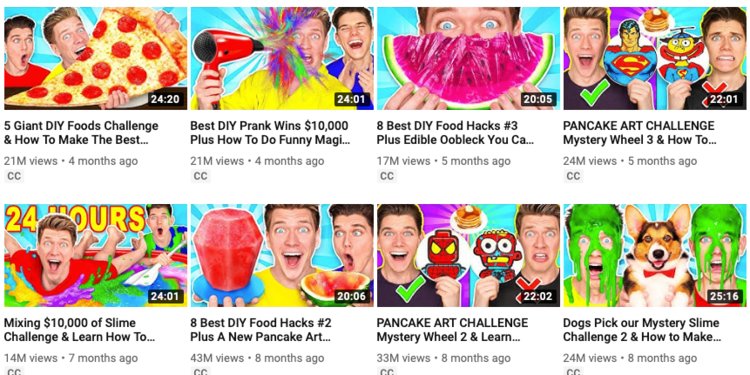 Apply your craft to YouTube, and use the data provided to see what worked

Collins took his magic and performance skills from AGT, and applied them to his YouTube channel. He also brought on his brother Devan, who incorporated his knowledge of art into making the thumbnail images.

“YouTube is a craft, just like magic, art, acting,” Collins said. “We looked at YouTube in the exact same way. There was a very strategic, intentional way of going about it.”

“One thing that we learned very early on, that we talk a lot about with our company, is that YouTube is about being dependable, without being predictable,” he continued.

A creator can do this by setting up what a fan can expect every time they come to their channel. Collins said for his own channel, the goal is to leave fans with “an enthusiasm for life,” and that it’s about continually being creative and keeping it fun.

But a creator shouldn’t keep doing the same thing over and over again.

Collins said he tried to figure out what worked and what didn’t on his channel as fast as he could. If something didn’t work for them, they’d cut it and move on. If something did work, they’d look to see how they could develop that more.

“It’s a really fun and exciting culture,” Collins said about being on YouTube. “Everyone feels it, they feel that they are on the cutting edge of something new. This is something that is unexplored that we are basically making up the rules as we go.”

For more on the business of being an influencer, and a breakdown of how YouTube creators make their money, check out these Business Insider Prime stories below: