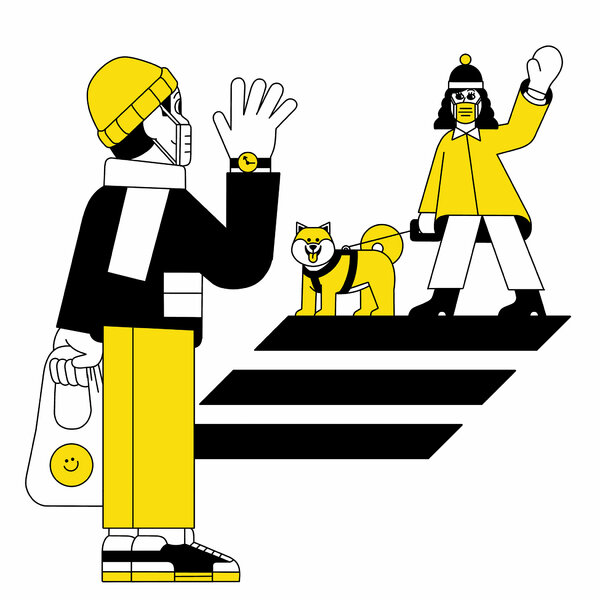 Human can survive three minutes without air, three days without water, three weeks without food and — according to survival lore — three months without companionship. Whether true or not, what’s clear is that people need people. And pandemics, many of us are learning, can be lonely times.

After months of lockdowns and shelter-in-place orders, some experts worry about a rise in the number of people feeling alone, especially young people and older adults. But resilience is also widespread, and studying loneliness can reveal a variety of ways to combat it.

“In light of the pandemic, there are ways that we can increase that sense of connection or reduce feelings of loneliness in ways that we may be able to do safely at a distance,” said Julianne Holt-Lunstad, a professor of psychology and neuroscience at Brigham Young University. “One of the things that research has shown is that social support is incredibly helpful in times of stress.”

Loneliness is more than being alone.

Loneliness is a complicated emotion. You can feel lonely in a crowded room or feel content in solitude. And people vary widely in how much human connection they need, Dr. Holt-Lunstad said. A useful way to think about loneliness, she said, is as the difference between how much social connection people want and how much they are getting.

It’s a subjective feeling, but researchers have begun to find signals in the brain that put the need for social interaction on par with the need to eat. In a study published in November, scientists deprived participants of contact with other people and then scanned their brains. After just 10 hours of isolation in a lab — where they could read or draw but had no access to their phones or computers — people reported feeling lonely and craving social interaction. When they then looked at pictures of people engaged in social activities, scans showed midbrain activation identical to that of people who looked at pictures of food after 10 hours of fasting.

“It was surprisingly consistent across people,” said Livia Tomova, a cognitive neuroscientist at the University of Cambridge in Britain, and co-author of the study. “Social interaction is not just something that’s kind of fun or comforting. It’s something that we really need in order to function.”

If loneliness is interfering with your ability to function, or if you’re thinking about self-harm, seek professional help. The National Suicide Prevention Lifeline offers free and confidential support at 1-800-273-8255, and many therapists are offering virtual appointments. For milder forms of loneliness, decades of research suggest a number of strategies to ease the toll of pandemic lockdowns.

The most obvious is seeking support from friends. Across a number of studies, people with strong social relationships had a higher likelihood of living longer than people with weaker connections. Just knowing that people are there for them, Dr. Holt-Lunstad said, leads to a reduction in stress. In one small study, subjects could complete a stressful task (giving a speech that they were told was being recorded and judged) while maintaining lower heart rate and blood pressure by simply thinking about a good friend instead of a casual acquaintance.

In a time of social distancing, this might mean calling, texting to check in, dropping off a gift or driving by and waving. “By providing support to others, it can provide a sense of meaning and purpose,” Dr. Holt-Lunstad said. “It can strengthen social bonds, and in turn lead to less loneliness.”

When seeking out connections, focus on your most unconditionally supportive friends and family. Some research shows that people feel more stressed and disconnected when their friendship networks include people who have betrayed them, weren’t there for them during tough times, frequently argue with them or otherwise cause negative feelings. A call with a close friend, in other words, will probably help more than a college reunion over Zoom.

“Simply increasing social contact is not sufficient,” said Bert Uchino, a professor of psychology at the University of Utah in Salt Lake City. “You need to increase contact in the relationships that are important and very positive to you. I think those are relationships that will get people through.”

Research suggests you don’t even need to know the people you’re helping. Just donating money to a good cause might help, Dr. Uchino said. In a series of experiments, researchers found that people who gave money to others were happier than if they spent it on themselves.

But if you’re overwhelmed by giving, it can become detrimental. Instead, try hobbies like cooking, gardening, writing in a journal or even listening to music. Creative arts can reduce loneliness, too, and while singing in person in a choir might not be possible right now, singing from balconies or through virtual groups can be powerful.

Reach out in real life.

Loneliness can strike at any age, but young people may bear the brunt of canceled activities and lost social time. An estimated 73 percent of Generation Z adults reported feeling lonely in a survey released by the American Psychological Association in October.

Although group video calls and social media conversations have taken over many people’s lives during the pandemic, we still don’t know how virtual communication affects loneliness. A 2012 study found that phone or in-person conversations between mothers and daughters led to hormonal changes that reduced stress, while text messages did not. And heavy social media use has been linked with higher rates of loneliness.

For young people, who were already used to digital forms of communication like texting, it may turn out to be an adequate substitute for in-person interaction. And some types of social media use can help people feel more connected, added Dr. Tomova, who is working to figure out what most satisfies our hunger for social interaction and why. “It’s not clear yet,” she said. “We don’t know a lot of things.”

For now, many people are waiting out the tough reality of a unique situation, including Henry, 96, a resident of Grand Oaks Assisted Living Community in Washington, D.C. Initially he was doing well while waiting out the pandemic. Then, over the summer, his closest friend died from non-Covid-19 causes.

Now he feels isolated and alone. His closest relatives and friends live in England and in other parts of the United States, and the pandemic has kept them from visiting him. Even if they could, they would have to talk to him through a window overlooking the courtyard.

For social interaction, he depends on phone calls and visits to the street, where he can interact with strangers walking by. “I wish I could have closer contact with some people,” said Henry who, due to the nature of his career in government, didn’t want his last name published. “The isolation is inevitable, so you have to adjust to it. That’s what I’m doing.”

Emily Sohn is a freelance journalist in Minneapolis.