Lately, Abdel R. Salaam has had a place on his mind: Rwanda. As the artistic director of DanceAfrica, his mission is to create programming that is the right mix of contemporary and tradition. It’s the kind of purpose that raises big questions: “How do you take an art form and a cultural experience and preserve the best of what it was,” he said in a recent interview, “and at the same time give voice to what it’s attempting to become?”

In remembrance of the 25th anniversary of the Rwandan genocide against the Tutsi, he has dedicated the performance portion of this year’s DanceAfrica festival, which runs Friday through Monday at the Brooklyn Academy of Music, to that African country. The two-act program will feature a premiere by Mr. Salaam, “Rwanda Reborn: The Remix,” and a performance by Inganzo Ngari, a traditional Rwandan company making its United States debut. 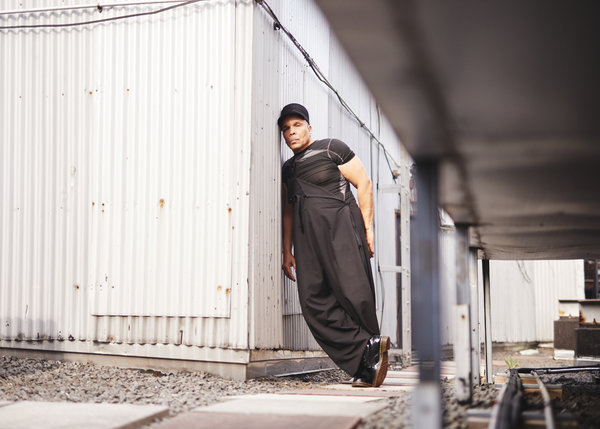 Mr. Salaam said his mission is to expand the scope of DanceAfrica outside of the more familiar West African region. Last year, his focus was South Africa. “I want to open it up so that the audience sees that this continent that is three times the size of the United States has more to offer,” he said. “We can learn and grow and be empowered by seeing the breadth of that continent. I’m trying to bring it all home for you.”

But his decision to focus on Rwanda wasn’t tied only to its political history. The Harlem-born Mr. Salaam — who performed with many modern dance choreographers before forming Forces of Nature Dance Theater — also fell in love with the dances. Just as there are robust examples in its repertoire, Rwandan dance also has a soft, harmonic side that emphasizes the movement of the arms.

“The movement was my first passion,” he said. “It looks like shape and form. It looks like contemporary dance but it’s not. So it completely violates and shifts the construct of what we think tradition is — they’re hitting lines and they’re moving through space, but it’s traditional dance.”

When it comes to programming DanceAfrica, Mr. Salaam is looking for a certain kind of artistic momentum. “Every time something is dropped and reborn, there’s an ever-so-slight variation,” he said. “It’s moving and morphing into something else. The same thing is happening in Rwanda.”

Spry and muscular at 69, Mr. Salaam hopes to express that sentiment in the way that “Remix” moves from tragedy to reconciliation. It’s still been only a few years since he took over the artistic direction of the festival after Chuck Davis, its influential and charismatic founder, stepped down in 2016. But Mr. Salaam has had plenty of time to consider his position.

Mr. Davis, who died in 2017, began the tradition of the festival in 1977 when his dance company performed in a recreated African village in BAM’s Lepercq Space. Mr. Salaam started performing with Mr. Davis’s company beginning in the early 1970s. For him, Mr. Davis will forever be his “dance daddy,” as he put it. “There’s not going to be another Chuck. Chuck is not even just an icon. He is the living memory of what has happened with African dance and culture in the United States.”

To make his “Remix” as authentic as possible, Mr. Salaam worked closely with the Rwandan actress Malaika Uwamahoro, who recently starred in the one-woman Off Broadway play “Miracle in Rwanda.” She contributes text and will perform alongside by the DanceAfrica Spirit Walkers, the BAM/Restoration Dance Youth Ensemble.

Ms. Uwamahoro was born in Rwanda in 1990; three months later, her family fled to Uganda as, she said, “There was already tension.”

After living in Uganda and the United States, she returned to Rwanda when she was nearly 12. “Hearing everything that was going on I was kind of nervous to go home,” Ms. Uwamahoro, now 28, said. “I felt so much resistance when my mom said, ‘We’re going back to Rwanda.’ I said, ‘No, I’ve only heard bad things about it.’ But when I got off the plane I instantly fell in love.”

During the creation of Mr. Salaam’s “Remix,” Ms. Uwamahoro would relate details about the genocide. “I knew that the babies were smashed against the walls,” she said. “This was the way they used to kill them.”

In the resulting work, such moments happen in blackouts where you hear the sound of crying infants to chilling effect. After the staging of the massacre, Ms. Uwamahoro emerges from a mound of bodies as a character Mr. Salaam has named Soul Survivor. When he instructed her to crawl her way out, she sad, “I really had to think: What is the first thing I could say after coming out of a clump of bodies? Finally I said, ‘This breath of life is more suffocating than death.’”

There is also a staging of a Gacaca, or a community court (based on an actual practice in Rwanda), in which survivors face prisoners. “There can be forgiveness,” Mr. Salaam said. “I asked Malaika, ‘Does everybody fess up?’ And she said, ‘No! They go back to jail.’ So that became an interesting theatrical challenge for me, but it is important because the Gacaca sets up the reconciliation.”

In the second act, Inganzo takes over with “Land of a Thousand Hills,” a rousing program of music and dance that demonstrates some of the stylistic differences between the men and the women. “Intore,” for instance, illustrates the male’s strength and bravery with powerful jumps; in one explosive leap, dancers land on the floor in a lunge position.

“It’s a warrior dance,” said Serge Nahimana, Inganzo’s artistic director and choreographer, of its roots. “It was performed like a parade in front of the king.”

The women’s dancing is bewitching in another way. “It’s elegant, it’s fluid, it’s flowing,” Mr. Salaam said. “It’s a living sense of grace. This is another construct of beauty and elegance.” He paused to sigh. “The litheness of it.”

Aspects of the culture are visible in the dances, particularly those for the women whose slow arm movements — held in a V shape, they stretch above the head with the palms facing out — relate to the shape of cow horns. Cows are revered in Rwanda: “When someone is rich, it’s someone who has many cows,” Mr. Nahimana said, with a laugh. “They have value in our culture.”

Ms. Uwamahoro concurred. While she is mainly an actress, poet and activist, she studied traditional dance in Rwanda as a teenager; it remains her great love for the way that it represents so much of her culture. “By bringing Ingazo Ngari, we show that it’s not just what happened in 1994,” she said, “but also who we were before the genocide and who we still are.”

And for Mr. Salaam, Ingazo Ngari is a healing force. He traveled to Rwanda for the first time last year, and as soon as he saw the company, he was smitten. “They were beautiful, they were elegant, they were seasoned and,” he said, pausing to laugh, “they could get visas. I got the best of all worlds. I got a company that’s gorgeous.”