LONDON — Take away the state-of-the-art drones and the gyro-stabilized 4K cameras from the BBC’s latest blue-chip natural history series, “A Perfect Planet.” Strip out the luscious score and the stunning close-ups of nature at its most intimate.

What you are left with are the same clipped tones and breathy, awe-struck commentary that entertained and educated the viewers of grainy black-and-white nature programs in the 1950s.

It is hard to find anything in modern television that has endured since the middle of the last century. Yet there is the British naturalist Sir David Attenborough and his reassuring, occasionally chiding, voice-of-God narration, virtually undimmed by age, still lending gravitas and luster to sequences of lesser flamingos in Tanzania, land iguanas on the Galápagos Islands and flamboyant cuttlefish off the coasts of Indonesia.

Repeatedly voted both the most trusted and popular person in his home country, Attenborough may be the most traveled human in history. (For his landmark 1979 series “Life on Earth” alone, he traveled 1.5 million miles.) “If the world is, indeed, to be saved,” writes the environmental journalist and activist Simon Barnes, “then Attenborough will have had more to do with its salvation than anyone else who ever lived.”

TV executives have been planning his retirement for more than 30 years, but at 94, Attenborough is still at the top of his food chain and being asked to front some of the most lavish and expensive productions to hit our screens. 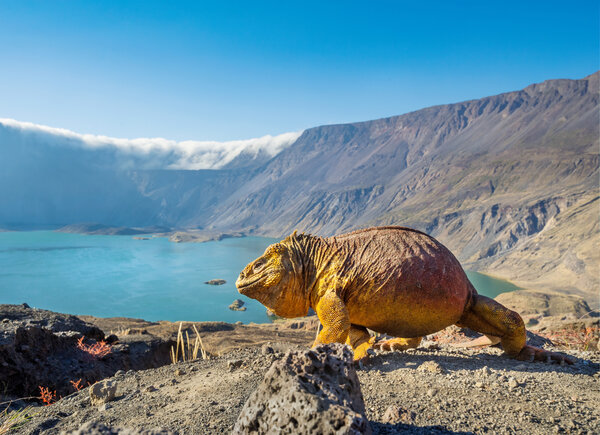 His latest, which debuts on Jan. 4 in the United States on the streaming service Discovery+, was filmed in 31 countries over four years (and six volcanic eruptions). Across five episodes, it will examine the forces of nature that shape all life: volcanoes, sunlight, weather, oceans and the newest: humans.

On a video call from his own habitat — the book-lined study of his home in the leafy London suburb of Richmond — Attenborough talked about his 67 years onscreen, the silver lining of the pandemic and why Joe Biden had him jumping out of his chair. These are edited excerpts from the conversation.

Was there a scene in your new series that had the most poignant echo for you of something you saw in the field decades ago — something that has been transformed since by climate change?

That’s not the focus of this particular series — climate change is what it’s not about. In a way, it’s an antidote to climate change gloom. It is showing the extraordinary resilience of the natural world and the marvelous way in which everything interdigitates, just forms a perfect mesh. In a way, that’s a biological obviousness in that things evolve to fit one another. If you’ve got a 50-million-year circumstance, it’s not surprising it ends up interlocking in many kinds of ways. It’s about how, in fact, in this age, when we’re worrying so much — and correctly — about the problems of the natural world, there are marvelous marvels to be seen and we’re showing some of them. We’ve had enough for the moment about disasters.

Are there ways you hope we can come out of this pandemic with an improved chance of meeting our obligations to the planet?

I think that what this pandemic has done, in a very strange way, is made an awful lot of people suddenly aware of how valuable and important the natural world is to our psychic well-being. We’re busy about our ways, going on the underground railway, dashing into offices, turning on lights. I am more aware of the changes that there have been in the natural world, around London, than I have been in decades. During the summer, I went for walks in my garden twice a day, at least. It’s only a pocket-handkerchief size — it’s not a big garden — but nonetheless, there was something to be found, every time. And I was listening to birds. I’m a rotten bird watcher — I don’t know one bird from the other — but I know a bit more this year than I did last, I’ll tell you that.

Are you surprised how little attention has been given to the role our abuse of animals has played in this pandemic — from the wet markets in Wuhan to mink farms in Denmark? We don’t seem to learn how our exploitation of living creatures can come back to bite us.

Well, that may be so. The markets of the Far East are notorious. Everybody concerned with animal welfare knows that these are the hellholes of the natural world, really. I remember seeing pangolins in the wet market in Indonesia in 1956. Whether there was a pandemic or not, there are parts of the natural world where animals are regarded as objects and treated as though they had no feeling, without any sympathy of any kind. And it’s prevalent all over the world. It’s a horrible thing to see.

With the departure of President Trump, we will almost certainly see a change in terms of climate policy and treaties. Do you think there’s still a chance to undo his cultural legacy?

Yes, I mean, we’re the spectators of what happens over there. But the fact remains that the United States is one of the major driving forces in the world. I have to say that at the Paris C.O.P. meetings [the United Nations Climate Change Conference in 2015], I was there with the British chief scientist, Sir David King. As we left the hall together after the announcement that they were going to sign, he said: “We’re there! We’re there!,” and he was walking on air.

When President Trump declared that they were going to withdraw from that, it was an equally, commensurate-in-size blow and very, very gloomy indeed. I actually jumped out of my chair when we heard Biden say he will renew membership of that agreement. I got up and said: “Rah! Rah!” [clenches his fists in the air]. This coming autumn, the meetings in Glasgow are going to be absolutely crucial to the survival of the natural world. But with the United States back in there, the world can say, “Yes, we’re still in there with a chance.” And it’s only a chance! It’s by no means certain.

Are politicians ever candid with you one-to-one about why they’ve found it so hard to make headway?

I know why they find it so hard. They know that within three, four, five years, they’re going to be standing in front of the electorate again and saying, “Put me back in power.” It’s easy enough to pay lip service to the bigger disasters, but if you don’t ever look beyond your own electoral life, then you’re short changing the electorate.

The paradox, it seems, is that I thought when the pandemic started, people would say: “Oh well, don’t worry me about what’s going to happen in 50, 100 years’ time. I’m desperately worried about what’s going to happen with the pandemic.” And people did say [that last part], but they didn’t say the future doesn’t matter. On the contrary, I feel that the C.O.P. talks in Glasgow, which should have been just about finished by now had the original plan happened, stand a better chance of success in about a year’s time. More people are aware of the fragility and value of the natural world as a result of the pandemic.

I was struck by a line of yours about rockhopper penguins in the oceans episode: You said their success depends on both judgment and luck. How lucky have you been, with your career having coincided with the advent of television and commercial air travel?

Yes, I think for a naturalist, you might say that my title for my career would be: “A Perfect Career.” I’ve been fantastically lucky — it’s nothing to do with merit but being there at the right time. Having spent all my life trotting around the world and getting other people to pay for it in order to see the most wonderful things you could ever wish to see … how could I not but say that was a perfect career? It was just incredibly fortunate.

Death has been such a presence this year, and there’s plenty of it in this series. Has a life spent studying the natural world given you a healthier attitude toward it?

I have a very, very healthy attitude toward death, yeah. [Laughs.] No, I don’t think it’s changed me. If you’re a biologist, you’re always aware of death. And you know how long species live and what their optimum is and so on.

Do you fear death?

No, not particularly. I ought to be thinking more about it because people are going to clear up after me. I’m not entirely indifferent to material objects, and I think about my poor son and daughter who are going to have clear it all up. That’s my main concern really.

I was a paleontologist at university, and I’ve always loved fossils and so on, so wherever I’ve gone on these trips, I’m liable to put hunks of rock in the bottom of my suitcase. If I were a decent scientist, I would have stuck a label on each one. So what I’ve been doing in this pandemic is I’ve been into the cellar and found hunks of rock lying around there and thinking, “What on Earth is that?”

Your voice was voted Britain’s best loved in a recent Virgin Media poll. It’s a crucial tool of your trade. Over the years, in what ways have you refined how you deliver your voice-over?

Well, I think, biologically, your voice changes. Mine hasn’t changed all that much, actually; I think it’s dropped a bit in pitch. I’ve seldom seen a program that I’ve written and narrated where I haven’t said at the end of it, “Not bad, but too many words.”

I think the best commentary is almost the least commentary, and fortunately one of the ways in which natural history editors work, at least the best ones, is that they make the story vivid in images, and you can watch the story without any words at all. If you can see it in the picture, you shouldn’t spend your time saying: “This is a glorious sight!” If the viewers aren’t convinced by the pictures, you’re actually making them feel dissatisfied. So, by and large, I eschew adjectives and metaphors and high-flown language and just try and produce the facts that are required to make sense of the pictures.

Nowadays, you generally do only the narration on these landmark series. What do you miss most about being out in the field?

Oh, just the air. Just being en plein-air, as they say. And the sound of the birds and one thing or another. And blossoms. And being able to be proactive, being able to turn over that leaf to see what’s underneath it. Alastair [Fothergill, Attenborough’s executive producer] actually paints birds, and that’s a way of focusing your attention about the natural world. I’m probably the least proactive naturalist that I know. I tend just to sit around and just watch.