Doc Severinsen hadn’t been able to practice his trumpet in a couple of days, and by his own admission, it was making him irritable. “I’m getting a little bit antsy,” he said one afternoon earlier this month.

Were he not currently conducting a video interview from the kitchen of his home in Tennessee, he said, “By now, I’d have a trumpet in my hand, and I would be pretty much doing that the rest of the day.”

Instead the 93-year-old Severinsen was sharing reflections from his life and career as a trumpeter and bandleader of “The Tonight Show” while his companion, Cathy Leach, sat nearby. As he occasionally, instinctually pursed his lips to practice the embouchure he uses on his mouthpiece, he explained that he was a different man when separated from his instrument. In his reedy, rumbling voice, he said, “I don’t become the most pleasant guy to live with.”

Audiences got to know Severinsen best during his 30-year run on Johnny Carson’s “Tonight Show,” where he served not only as its musical frontman but also as a flashily attired comic foil to its host, who became a close friend behind the scenes. Carson died in 2005, and his announcer and sidekick, Ed McMahon, died in 2009, leaving Severinsen the most prominent surviving face of that influential late-night show. 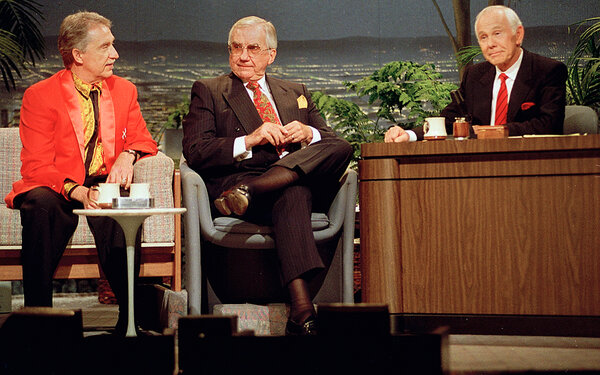 Now, Severinsen is pulling back the curtain on his own life in a new documentary, “Never Too Late: The Doc Severinsen Story,” which will make its debut Friday on PBS’s “American Masters.”

The film, which is directed by Kevin S. Bright and Jeff Consiglio, chronicles Severinsen’s upbringing in Arlington, Ore., where his father was the local dentist (thus earning his son, Carl, the lifelong nickname “Doc”). The documentary also explores his work as a musician, on “The Tonight Show” and off, and dives deeply into his personal life, his marriages and his family’s history with alcoholism.

If the movie uncovers much that viewers didn’t know about him, Severinsen said, “I found out how much I didn’t know, too.”

Severinsen spoke further about the making of “Never Too Late,” its revelations and his fulfilling, frustrating obsession with the trumpet. These are edited excerpts from that conversation.

You’ve been off “The Tonight Show” now for almost as many years as you were on it. Does that experience seem distant to you now?

It does. But at first — and I can’t tell you how long that went on for — I would wake up in the morning and think, Oh, God, I’ve got to get going or I’m going to be late for work. I’ve got to pick out a program of music. Oh, wait a minute — I don’t do that anymore.

What keeps you occupied now?

I’ve got that jealous bitch over in the corner — the trumpet. And if you don’t pick that baby up and treat it right, you’re going to have nothing but trouble.

How were you persuaded to be the subject of a film about your life?

Kevin Bright has had a working relationship with my eldest daughter, Nancy. They had renewed their friendship, and Kevin said: “How’s your dad? What’s he up to?” The next thing I know, Nancy’s calling me, saying, “Dad, I spoke to Kevin and he wants to do a documentary.” I laughed and said: “That’ll be the day. No thanks.”

What changed your mind?

Kevin knew how to handle me. One thing led to another, and all of a sudden we’re sitting in the kitchen, here in this house. I had this feeling of, Why am I doing this? What the hell is going on? Then we started talking and we never stopped.

Are people surprised when they see you dressed casually, as you are today, instead of sporting some of your memorable apparel from “The Tonight Show”?

The way you see me now, it’s the way I’ve always been. I’ve got a cowboy shirt on and jeans and cowboy boots. I thought I might go riding today — it turns out, that’s not going to happen, but I’ve still got the right clothes on for it.

So all that eye-popping clothing you wore on the show was a kind of affectation?

It was at first, yeah. It was a desperation kind of a thing. You don’t know when they’re going to talk to you or what they’re going to talk to you about. All you know is you’ve got to pick out the right music, conduct the band and be ready to talk. Because the one thing you don’t want to have happen is, you’re sitting there, [mindlessly] “Oh boy, I sure enjoyed that dinner last night,” and you hear Johnny say, “Isn’t that right, Doc?”

Did Carson ever catch you off guard?

One time, he asked me to hit a double high-C on trumpet. And I thought, Holy Christ. I knew I was capable of it if I had time to work on it. But somehow, from past experience, I hit that note and did a pretty doggone good job. And I thought, I’ve got to have a finish for this. So I did a take of great pain and reeling around and fell flat on the floor. I didn’t know I was going to do that! Neither did Johnny. It’s all about being in show business, I guess.

Is it fair to say there was a kind of friendly one-upmanship in your on-camera relationship with Carson?

Well, there was no one-upmanship because we knew who had the one-up. It was mostly me paying attention and trying to fit in. But Johnny, he was an artist. He could produce and write a script in his mind while he’s saying it.

Carson had a behind-the-scenes reputation, even among people who worked for him, for being enigmatic or elusive. Was that your experience with him?

Well, the only person who could answer that is Johnny. He knows if he’s thinking in his mind about some friend who’s passed away or a secret desire he has to do this or that, or God, I wish I’d had a hamburger for lunch. But he was an extremely bright man. He was friends with Carl Sagan, and he used to love to get together with him and talk about the universe. I’d go out with him on his boat, and we’re sitting there, looking up at night, and he’s explaining the whole damn works up there. There was a lot more to him than he ever let on.

You felt you saw a side of him that he didn’t necessarily share with others?

I did, and I can tell you right now, I ain’t going to talk about it. [Chuckles.] Us guys, sometimes, when we have real pain — Oh, I wish I hadn’t done that, or I wish I had done that — you don’t get the whole thing.

You’re candid in the film about your history with alcoholism — how it ran in your family and how your first wife’s problems with it led to the dissolution of your marriage to her. Were you nervous about sharing this with people?

No, I wasn’t nervous because it’s fact. If you’re an alcoholic, you should be one of the first ones to know. Well, I wasn’t one of the first ones to know that I was an alcoholic. My wife at that time, I’ll tell you, I feel sorry for her. I’m not angry over any of it. There I was with three little kids — I’ve got to be Dad, I’ve got to be Mom, I’ve got to be the maid. I’ve got to do it all. And then I have to go over to the police department and say to the guy at the des:, “Listen, if your patrolmen see my wife driving our car — and especially if there’s little kids in there, would you do me a favor? Would you pull her over? And if she’s been drinking at all, take the car from her, take her home and make the kids safe.”

There was often a lot of joking about drinking on “The Tonight Show.” Did that make it hard to maintain your sobriety?

I didn’t come to work and say, “Now, Johnny, there’s something I’ve got to tell you — I’m an alcoholic, so look out now.” Quite the opposite. And about the time I was just starting out on “The Tonight Show,” I also became aware that if you’re an alcoholic, you’re probably a drug addict also. And I found out that I was. And I said, “Whoa, boy, they’re taking away all my toys.”

But you’re better for it.

What drugs were you using?

I don’t even want to discuss it. None of the rock-hard stuff. But close. Very close.

Your third wife, Emily, is an on-camera subject in the documentary, and she speaks frankly about how your marriage to her unraveled after your time on “The Tonight Show” ended. Were you concerned about including her in the film?

No, I had to trust Kevin on that. If you’re doing something that’s extremely revealing, about private matters, there’s a producer that will make that decision and you’d better figure out how you’re going to live with it. Emily, she’s a very bright person, and fair. She’s — well, I’m in a much better place.

You’re happy in your life with Cathy Leach, who is a professor emeritus of trumpet at the University of Tennessee?

I don’t know how to describe it. But when I pull the covers up under my chin at night and she reaches over and makes sure that I got my arms covered and I’m all settled and everything’s OK — I don’t want to get into religion, but I thank God she came into my life.

Are you still discovering new things about the trumpet?

Oh, yeah. But when you pick up a trumpet, don’t think it’s going to be a bouquet of roses the rest of your life. You get out of the trumpet exactly what you put into the trumpet. If you put bad timing and a bad attitude, anything negative at all into the trumpet, it comes right back to hit you in the face.

Do you ever have days when you think, I can’t play that damned thing for another minute?

Yes, but I don’t call it a “damned thing.” Because the trumpet has the last word. I try to remain respectful of that damned thing.