Donald Trump’s transition from President of the United States to private citizen reportedly wasn’t an easy one for him. He apparently didn’t understand that once you are no longer in the White House there is a lot less fanfare surrounding you.

It’s not uncommon for anyone who has held the most powerful job in the world to feel letdown after they leave the White House, according to The Washington Post. Bill Clinton spent “his first months after leaving office holed up at home in Chappaqua, N.Y., bingeing TV shows and movies,” so the mental health aspect to post-presidential life exists. However, it’s Donald Trump’s approach to recreating “the trappings of the presidency” that insiders find “sad.” A source likened his Mar-a-Lago location to “a Barbie Dream House miniature.”

Donald Trump didn’t seem to understand that the press was also going to take less interest in him and that he couldn’t “have a group standing around waiting for him anymore.” A press pool isn’t there to hang onto his every word. He still has an “appetite for attention,” but he has to find it in different ways now. One of his employees, Natalie Harp, rides with him in his golf cart, armed with a laptop, and “sometimes a printer,” to show all of the wonderful articles being written about him. Yes, this is reportedly her job.

The former president hasn’t adapted well to what Insider calls a “downsized life” because there are too many people around him who enable his neediness. Former Trump adviser David Urban told The Washington Post, “He needs someone there to say, ‘Here’s a really bad idea, and this is why.’ I don’t think he has that kind of crowd around him right now. Nor does the president want anybody like that.” It’s likely what is making his third presidential run so difficult — he only wants the glory, but not the hard work that comes with getting back to the White House.

Before you go, click here to see the biggest presidential scandals in US History. 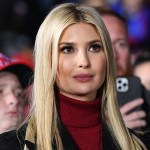 
Ivanka Trump Is Called Out by Jan. 6 Select Committee for Having ‘Recollection’ Issues About the Insurrection