Donald Trump’s former personal attorney Michael Cohen made an interesting observation to his Twitter followers on Wednesday, one that has us even scratching our heads. He discussed the fact that son-in-law Jared Kushner, who has been notably out of the public eye since leaving the White House, has been “absent from all the controversy, indictments and arrests.” 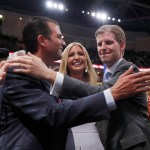 Cohen was referencing CNN’s 2017 article, which labeled Kushner as Trump’s “Secretary of Everything,” when he wrote the curious post. “Interesting how @jaredkushner(#SecretaryOfEverything) name appears to be absent from all the controversy, indictments and arrests,” he tweeted. “Is he next to fall or a cooperating witness? Knowing what a snake he is, I bet the latter!” He didn’t offer any further proof as to why he felt this way, but many political insiders have noted Kushner’s retreat from Trump’s side.

In late June, there were reported tensions between the father-in-law and Kushner because Trump wasn’t happy about his son-in-law’s book deal. CNN insiders were saying the former president was “suspicious of Jared” for quite some time and was questioning his loyalty to the business of Trump. Now, Kushner could be squirreled away writing his book and focusing on his young family with wife Ivanka Trump — that could easily be the reason we don’t hear from him much.

But Cohen seems to be implying that Kushner’s low profile has more to do with the ongoing Manhattan District Attorney’s Office and the 2017 Washington D.C. inauguration investigations. The attorney is suggesting that the former senior adviser would rather flip on his father-in-law than get in any hot water over the current legal situations circling the 45th president.

Of course, Cohen would probably love it if Kushner testified against Trump because that’s exactly what he did in the aftermath of the Stormy Daniels and Karen McDougal hush-money payments. He is still serving his time under home confinement for tax evasion and bank fraud, but Cohen won’t let up his relentless pursuit of Donald Trump.