Edward Fletcher, who as Duke Bootee was the driving force behind “The Message,” the 1982 hit that pushed hip-hop from merry escapism toward chronicling the daily grind of urban poverty, died on Jan. 13 at his home in Savannah, Ga. He was 69.

The cause was heart failure, said his wife, Rosita Fletcher.

Mr. Fletcher started writing “The Message” in 1980, the same year he became a studio musician at Sugar Hill Records, which released the early work of groups like the Sugar Hill Gang and Grandmaster Flash and the Furious Five. Mr. Fletcher toured with Sugar Hill acts, contributed to the recording of seminal tracks and occasionally composed music.

“We wrote the first chapter in the history of rap,” he said in a 2013 interview broadcast on Channel 28 in Savannah.

The sound of hip-hop was initially cheerful and upbeat, with lyrics that encouraged dancing crowds to “throw your hands up in the air/and party hardy like you just don’t care,” as the Sugar Hill Gang rapped on their landmark 1979 single, “Rapper’s Delight.”

In his mother’s basement one night, in the tough and increasingly impoverished city where he grew up, Elizabeth, N.J., Mr. Fletcher was smoking a joint with a friend and fellow musician, Jiggs Chase. Thinking about his hometown, he began piecing together a different approach to hip-hop.

“The neighborhood I was living in, the things I saw — it was like a jungle sometimes in Elizabeth,” Mr. Fletcher told The Guardian in 2013. In another interview, with the hip-hop historian JayQuan, he recalled how often someone would “ride by and you hear a bottle get broken.”

The images of the jungle and broken glass contributed two signature motifs to the lyrics of “The Message,” which sought to define everyday life in a tough urban world. The rhymes included “Got a bum education, double-digit inflation/Can’t take the train to the job, there’s a strike at the station.” Mr. Fletcher wrote most of the lyrics and the lurching, ominous electro melody.

It baffled Grandmaster Flash and the Furious Five.

“It was just too serious,” Melle Mel, a member of the group, told Uncut magazine in 2013. “We were making party tracks,” he added, “and wanted to keep in the same lane. Nobody wanted that song.”

Melle Mel eventually caved to pressure from Sylvia Robinson, one of Sugar Hill’s owners. He contributed a final verse to “The Message” and shared rapping duties with Mr. Fletcher, who also played all the instruments except guitar. As a rapper, Mr. Fletcher’s baritone voice registered a cool impassivity that stood in contrast to the excitability of many of his peers. 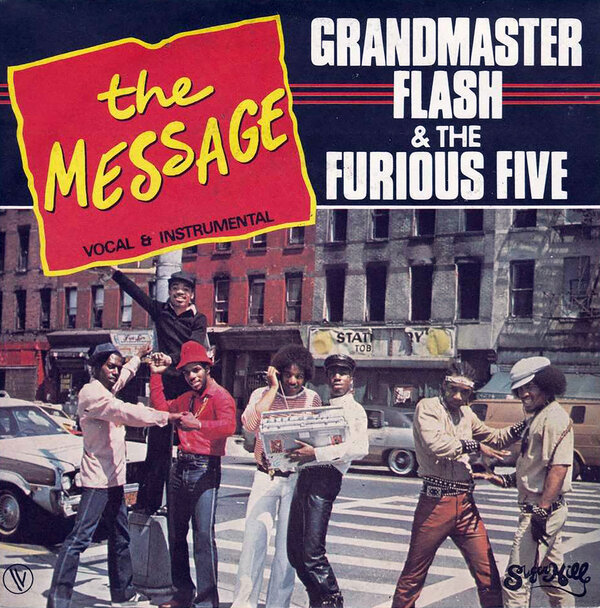 The song was an instant hit. In years to come, it would be sampled nearly 300 times, according to whosampled.com. Rolling Stone called it the greatest song in hip-hop history and a major influence on rappers like Jay-Z and the Notorious B.I.G. It also helped earn Grandmaster Flash and his band a place in the Rock & Roll Hall of Fame, even though Melle Mel was the only one of them to appear on what was called “their masterpiece,” aside from a short closing skit.

“The world (me included) absolutely froze in its tracks the week it debuted on radio,” the musician and songwriter Questlove wrote in Rolling Stone. “Hip-hop was once known as party fodder, a fad. ‘The Message’ pulled a 180 and proved it could be a tool of sociopolitical change.”

Mr. Fletcher was credited as a co-composer of “The Message” and received royalties for his work on it. But he did not appear on the album cover, and Rahiem of the Furious Five lip-synced to Mr. Fletcher’s voice in the music video.

Mr. Fletcher’s feelings about being cut out of the public image of the song were mixed. At times he saw a shrewd marketing strategy. “It worked with a group like Flash and them because they had that threatening, street image,” he said in the interview with JayQuan. “There aren’t any other groups from that time that could have pulled that record off better than them.”

But his gratitude had limits. “If I’d known what it was going to do,” he told The Guardian about his hit song, “I’d have kept it for myself.”

Edward Gernel Fletcher was born on June 6, 1951, in Elizabeth. His father, Ernest, was a truancy officer, and his mother, Helen (Bridges) Fletcher, taught elementary school. When he was 16, Ed began dating Rosita Ross, a classmate and family friend. They married in 1976 and stayed together for the rest of his life.

Ed took drum and xylophone lessons as a boy, and he played in cover bands at Dickinson College in Pennsylvania. After graduating in 1973 with a degree in English, he played with local New Jersey bands. He first gained notoriety for playing on Edwin Starr’s disco single “Contact,” and two years later he started working at Sugar Hill.

Mr. Fletcher left the music industry while still a young man; the money he was making, he decided, was not worth all the travel and the time away from his family. Back in New Jersey, he turned to what he called “the family business”: teaching.

He got master’s degrees from the New School in media studies and from Rutgers University in education. He worked at a juvenile detention center, a high school and two colleges, spending the last decade of his career as a lecturer in critical thinking and communication at Savannah State University. He retired in 2019.

In addition to his wife, Mr. Fletcher is survived by two children, Owen Fletcher and Branice Moore, and five grandchildren.

The frank discussion of everyday problems in “The Message” informed Mr. Fletcher’s sensibility as a teacher. He propounded what he called the Fletcherian Principles. In the Channel 28 interview, the rap godfather explained the ultimate Message he had worked out for young students: