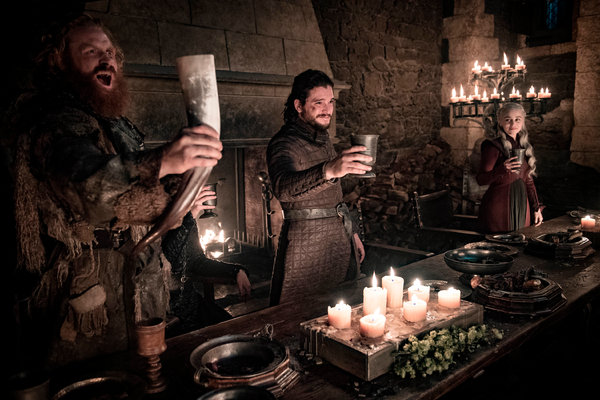 ‘Game of Thrones’ is likely to lead the nominations.

HBO’s “Game of Thrones” has won more Emmys — 47 — than any other prime-time series in TV history. A three-time best drama winner, the epic show based on the work of George R.R. Martin is the favorite to win the prize once more.

The eighth and final season of “Game of Thrones,” which had its finale on May 19, proved too much for some fans and critics. Some were dissatisfied with how it wrapped up. Some were uncomfortable with what they perceived as hairpin narrative turns and sudden character flip-flops. Through it all, however, the popularity of the series has been stunning. When digital viewing is factored in, an average of 45.8 million people watched the final season’s episodes, HBO claimed.

If “Game of Thrones” is going to be on the receiving end of an Emmy voter backlash, a newcomer could play the role of spoiler. Of last year’s seven nominees, only “Game of Thrones” and “This is Us” have a crack at the big prize again this year. Other series nominated in 2018 — including “The Handmaid’s Tale,” “Stranger Things” and “The Crown” — are not eligible this time around.

Emmy night is usually a win for Julia Louis-Dreyfus. As Selina Meyer on HBO’s “Veep,” she has won outstanding lead actress in a comedy series six times, beating out Candice Bergen and Don Knotts for most Emmys won by a performer in a single role.

Ms. Louis-Dreyfus has taken home eight Emmy statuettes overall, tying Cloris Leachman for the most ever won by an actor. She will have many Emmy voters rooting for her following her return after she revealed she had breast cancer.

She faces formidable competition from Rachel Brosnahan, who won her first Emmy for best actress in a comedy for her role as a housewife-turned-comedian in Amazon’s “The Marvelous Mrs. Maisel.” Ms. Brosnahan is a shoo-in to be nominated again.

In the category of best comedy series, expect a three-way showdown among “Veep,” a three-time winner, “The Marvelous Mrs. Maisel,” which won the award last year, and HBO’s “Barry,” the blood-spattered series that earned acting Emmys for Bill Hader and Henry Winkler last fall.

Several recent nominees, including “Atlanta,” “Curb Your Enthusiasm” and “Silicon Valley,” are not eligible this year. The Television Academy, the governing body behind the awards, considers programs released from June 1, 2018, through May 31, 2019.

The women’s acting categories will be competitive.

The Primetime Emmy Awards, like most ceremonies that fete the entertainment industry, continues to dole out acting awards by gender. The Television Critics Associations Awards has gone a different route, handing out awards without regard to gender, in categories separated by genre (drama and comedy). And when the critics’ group announced its nominees last month, it suggested the strength of female performers on TV by singling out 10 women among its 12 total nominees.

The robustness of the field will be in evidence on nomination day. The “Killing Eve” star Sandra Oh — who has been nominated six times without an Emmy win — is the only actress nominated last year who is eligible for an encore nod. Other contenders include Ms. Oh’s cast mate, Jodie Comer; Julia Roberts, from Amazon’s “Homecoming”; and Laura Linney, a star of Netflix’s “Ozark.”

The academy may also honor a rookie in the category of best actor in a drama. Matthew Rhys, who won last year for his role in the final season of FX’s “The Americans,” is out of the race.

Will Netflix or HBO receive the most nominations?

Netflix reached a milestone last year when it garnered more Emmy nominations than any other network or platform. In the process, it snapped HBO’s 17 year-streak of being on top and signaled the growing power of the streaming companies. Ever since last year’s nominations were announced, HBO executives have quietly vowed to come out on top in 2019.

The bragging rights will be all the more important as the streaming wars heat up. Last week, HBO’s parent company, Warner Media, which is controlled by AT&T, announced plans for a streaming platform called HBO Max that will debut next year. And its first move? “Friends,” the old NBC sitcom that has had a rich afterlife — not only in syndication, but as a hugely popular streaming show — would be removed from Netflix and head to HBO Max.

John Koblin covers the television industry. He reports on the companies and personalities behind the scripted TV boom, and the networks that broadcast the news. He previously covered fashion. @koblin