Some of the best paintings of Surrealism were made in Mexico during the 1940s and ’50s, by women. The proof is here, in two astounding exhibitions: “Surrealism in Mexico,” a survey at the Di Donna Galleries, and in a pop-up show brought to us by Gallery Wendi Norris of San Francisco, an overview of the work of the brilliant British-Mexican painter and writer Leonora Carrington.

These shows hardly exhaust their subjects, but they are sufficiently concentrated and together they put on view more Mexican Surrealism than we have seen here in some time. They are mere blocks apart on Madison Avenue in delightfully different settings. Carrington’s luminous Gothic paintings, are displayed in a spacious, nearly bare white cube that seems to amplify the paintings’ magical, often masked creatures and tinted atmospheres. The show culminates in six sculptural masks that Carrington designed in 1976 for her never-produced play, “Opus Siniestrus: The Story of the Last Egg.”

At Di Donna, works by 18 artists — including five paintings and a painted sculpture by Carrington, and six canvases by the Spanish-Mexican painter Remedios Varo, her good friend and stylistic compatriot — are shown against red walls and dark wood that make everything glimmer.

Erin O’Neill’s meticulous chronology in the Di Donna catalog traces the complex story of Surrealism in Mexico. Many of the country’s young artists, like those from other parts of Europe and Latin America, found their way to Paris in the late 1920s and ’30s. The French capital was alive with Surrealism and its contagious emphasis on the subconscious, dreams, startling juxtapositions and general otherworldliness.

As World War II approached, many artists found their way to, or back to, Mexico, where living was relatively cheap and the country’s borders open, especially compared with the United States. In addition the Surrealist mind could be set abuzz by Mexico’s variety of climes and topographies and the layers of cultures, from present day back to pre-Columbian. André Breton, Surrealism’s high priest, said as much when he visited for four months in 1938. 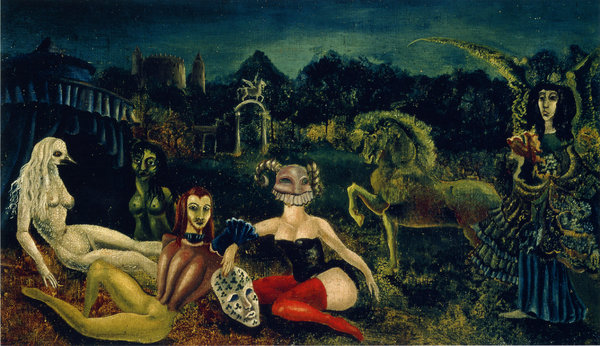 Leonora Carrington arrived in Mexico in 1942 and stayed until her death, at 94, in 2011. She had temporarily married a Mexican diplomat to escape Europe, leaving behind a life already fraught with adventure. She rebelled instinctively against her wealthy, aristocratic family, was determined to paint and write and found her inner Surrealist when she visited “The First International Surrealist Exhibition” in London in 1936. By then she was steeped in myth and fantasy, starting with folk tales learned from her Irish mother and nanny. She had also been thrown out of two prominent Roman Catholic boarding schools; sent to finishing schools in Florence and Paris, where paintings of all kinds (but especially Early Renaissance) were abundant; and presented at Court, receiving rigorous training in drawing along the way.

In June 1937, at a dinner in honor of the Surrealist Max Ernst, the 20-year-old Carrington and the 46-year-old guest of honor fell instantly in love and shortly ran off together, first to Cornwall for the summer, then to Paris and finally to the South of France. There they bought a falling-down farmhouse that they refurbished, building sculptures into the walls, while Carrington’s art quickly matured. When the German-born Ernst was incarcerated as an enemy alien in 1939, Carrington had a nervous breakdown and her parents arranged for their distraught daughter to be institutionalized in an asylum in Spain, where she stayed for three years, endured electroshock therapies, had an affair with her doctor and was able to paint.

The first two paintings in the Carrington show give some notion of her sufferings, imagination and talent; both are small but so full of enticements that it’s hard to know what to look at first. “Down Below” (1940) is dominated by a lavishly costumed and masked cast of characters, rich colors and nervous, refined brushwork. Set in a dark formal garden, it shows Carrington and a white horse, her alter ego, approaching the inmates of an asylum who recline, like Delacroix’s Arab women. In “Garden Bedroom,” painted once she reached New York in 1941, we find the gray-faced artist looking slightly deranged and riding a rocking horse, glaring at a red bird that is Ernst’s alter ego (he would shortly marry Peggy Guggenheim) with a mildly erotic-looking canopy bed in the background.

From here, Carrington’s art explodes in all directions. The masks fuse with their wearers, creating hybrid beings like those conducting rituals in “Evening Conference” (1949), or the pale green moth-flower of “And Then We Saw the Daughter of the Minotaur” (1953). The imaginary settings, characters and palette change with each canvas. Shown for the first time here is a gouache in weathered-copper-green titled “Women of Conscience,” which recasts Adam and Eve as Egyptian female figures (one black, one white). The source for a well-known poster of the era, it reflects Carrington’s activism (she was a founder of the Women’s Liberation Movement in 1970s Mexico) and her belief that the earth was a female entity being destroyed primarily by the actions of men.

At Di Donna, “Surrealism in Mexico” sets Carrington’s art against the matrix of friendships and creativity that sustained it. Its small gemlike works include Frida Kahlo’s “Survivor” (1938) in which a pre-Columbian ceramic warrior guards an empty plain with a ruined stone gateway in the distance — the small painting itself armored by an elaborate cut-tin frame. The exchange between Carrington and Remedios Varo is supplemented with paintings by Gunther Gerzso, a Mexican Surrealist who commemorated his circle in “The Days of Gabino Barreda Street (Portrait of Leonora Carrington, Remedios Varo, Benjamin Péret, Esteban Francés and Self-Portrait).”

And she tends here to focus on a single figure and activity, as in “Exploration of the Sources of the Orinoco River,” in which a well-dressed explorer navigates a small red, garment-like boat, finding one source inside a little wood hut where water gushes from a goblet on a small table.

There are many other attractions at Di Donna. Diego Rivera’s portrait-drawing of Breton, made during his 1938 trip to Mexico; works by Wolfgang Paalen and Gordon Onslow Ford, to mention two émigrés, and haunting staged photographs by Lola Álvarez Bravo, and Kati Horna, a Hungarian refugee.

The little-known French-Mexican artist Alice Rahon, is represented by a superb little assemblage involving feathers, stones and a snail shell, and “Corn Field,” from 1954, a large exultant abstraction. It looks like nothing any other painter — European, Mexican or American — was doing at the time.

If New York is lucky it will see more work by Rahon, Varo, Carrington and their fellow travelers. Surrealism, the most accessible of modern art movements, still has its secrets.

Leonora Carrington: The Story of the Last Egg 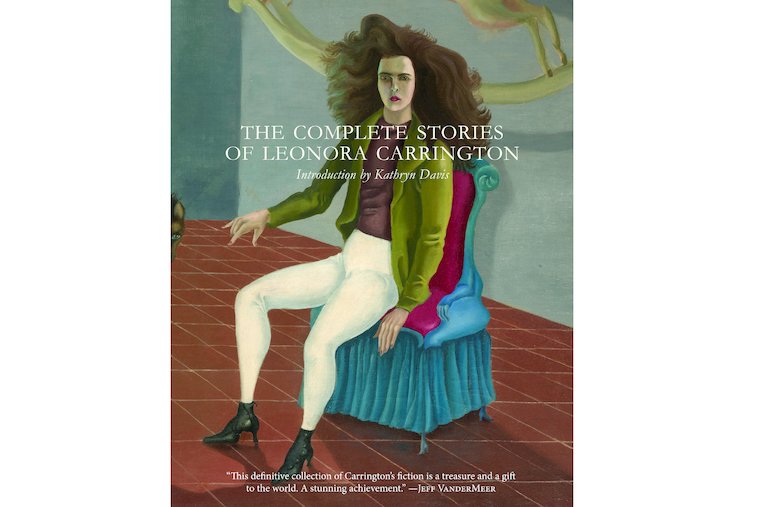