The fashion designer Zac Posen has always loved food. Now 40, he recognized that it had a unique ability to keep people connected even in his youth. His mother, Susan, worked as a corporate lawyer and, he says, “had crazy hours,” so many of the meals at the family’s SoHo loft were prepared by his father, the artist Stephen Posen. “My dad,” Zac says, “felt very strongly that a family that ate together stayed together,” and would often clip recipes from The New York Times, especially the health-conscious ones. “I was a kid who grew up eating tofu and seaweed.” Other sources of inspiration were the nearby neighborhoods of Chinatown and Little Italy, and it wasn’t long before the younger Posen started experimenting in the kitchen as well, making elaborate desserts for family events or, in his high school years, putting on dinner parties for his friends.

In 2001, when Posen was first starting out as a designer, after having studied at Parsons in New York and Central Saint Martins in London, he set up an atelier in the living room of his childhood home. “As the demands got higher,” Posen says of his namesake brand, which was shuttered in 2019, cooking “was always my solace, my happy place.” He began sharing the dishes he created, everything from matzo ball soup to homemade ramen to pesto with sweet Italian sausage to brown butter chocolate chip cookies, on Instagram using the hashtag #CookingwithZac, delighting his followers with a personal, joyful tone and mouthwatering photos. Nearly four years ago, Posen even released a cookbook, “Cooking With Zac.” 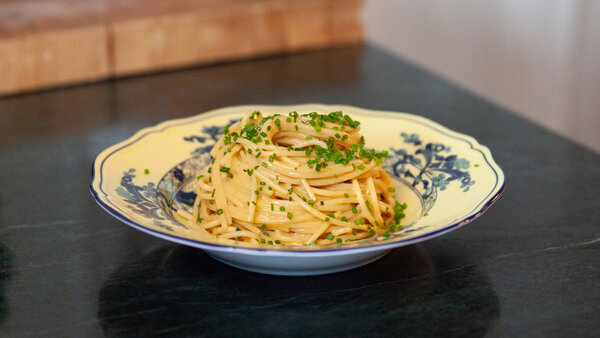 Last year, some of his friends got to do just that, as Posen spent the early months of the pandemic quarantining with a small pod at a house on Long Island. “I’ve never cooked more in my life,” he says. The group tried fried local blowfish, yellow tomato gazpacho, lobster risotto, barbecue ribs, cherry peach pie and more. “Then I went on this angel food cake kick,” says the designer, who would incorporate unconventional ingredients like fennel pollen and saffron into the batter to give it a zesty boost. Being there also allowed him to see plants in the garden through from seed to harvest, something he’d always wanted to do. “Using my hands to work the soil feeds my soul,” says Posen, whose parents now live on a farm in Bucks County, Penn. “Pulling your first carrot at the end of the season brings real joy. You’re collaborating with nature and science and history.”

Posen cleverly organized the recipes in his cookbook by fashion season — spring and summer, resort, fall and winter and holiday — and is quick to point out that good ingredients are a lot like great fabrics. In turn, his passion for food has carried over into his designs. Among the many dramatic and expertly crafted red carpet looks he’s best known for is a 3-D-printed iridescent pale pink gown worn by the actress Deepika Padukone to the 2019 Met Ball that featured sea urchin-inspired beading. Posen first tasted uni, which are the gonads of the sea urchin and a popular delicacy in Japan (“uni” is the Japanese word for sea urchin), in a pasta dish he had on a trip to Sardinia. He was so taken with the creamy, briny dish that, once back in his Upper East Side apartment, he set about fine-tuning his own version. It’s a dish the designer, who is currently at work on select custom couture pieces and is collaborating as a costume designer on the forthcoming film “The Outfit,” makes often, and one that evokes a time when both travel and large convivial gatherings were possible. Below is Posen’s perfected recipe, along with a recent iteration of his cooking playlist. “It’s like the food,” he says. “It’s eclectic and it feels good.”

1. Put the uni, olive oil, heavy cream, salt, black pepper and cayenne pepper into a blender and blend until smooth.

2. Add chives into the blender, saving some to use as a garnish.

3. Cook the pasta according to package instructions.

4. In a separate large pot that is big enough for all of the pasta, melt butter on very low heat.

5. Once the butter is melted, add ¾ of a cup of the pasta water.

6. Add the cooked pasta to the butter and pasta water mixture. Be sure to toss so that the mixture thoroughly coats the pasta.

7. Turn off the heat and pour the uni sauce over the pasta. Stir together and then plate and top with the remainder of the chives.