At the first rehearsal for “Merry Wives” at Shakespeare in the Park, the playwright Jocelyn Bioh told a story. In the first months of her undergraduate acting program, she said, a professor had scrutinized her look, listened to her accent and decided that Shakespeare was not for her. “I was told that none of my Blackness, none of my Africanness, none of my New Yorkness was allowed to be a part of Shakespeare in any way,” said Bioh, a child of Ghanaian immigrants.

But for this summer’s Shakespeare in the Park, which began performances on July 6, Bioh (“School Girls,” “Nollywood Dreams”) and the director Saheem Ali will premiere a new adaptation of “The Merry Wives of Windsor,” which repopulates Shakespeare’s folk comedy with the African immigrants who call Harlem home. “To be able to put all of myself into something that I was told none of myself could be in feels pretty incredible,” she said, tearing up on the 105-person video call.

A knockabout comedy, this “Merry Wives” is also something more. Like the hit version of “Much Ado About Nothing” that the Delacorte presented in 2019, it features an all-Black cast. But this time that cast represents immigrant communities not often seen onstage. Bioh and Ali hope that it will serve as a model of what theater might become. “We want it to be antiracist,” Ali said. “We want it to have opportunities for people of color that didn’t exist before.”

Besides, who better to usher in hot vax summer than its thirsty hero, Falstaff? 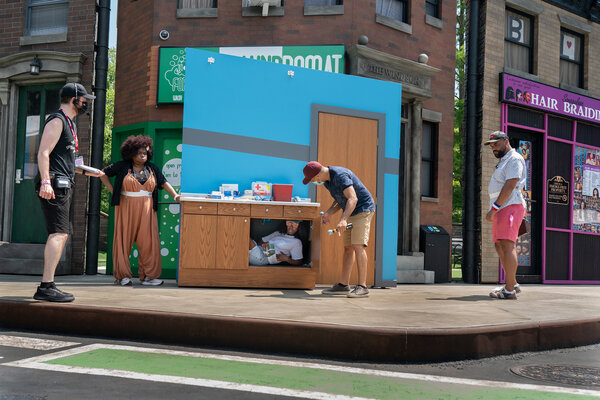 Until late this spring, the staff at the Public Theater, which oversees Shakespeare in the Park, didn’t know what the summer, hot or not, would bring. The cancellation of last year’s season, the first time since its opening that the Delacorte had gone dark, was as crushing as it was inevitable. To ensure that it could reopen, the staff planned for every contingency. Government directives and union contracts ultimately determined that the Delacorte could host a single show, provided that the show ran less than two hours, to avoid the need for an intermission and its mingling, and feature only 12 actors so that no one would have to share a dressing room.

Ali, who would have made his Delacorte debut last summer with “Richard II” and who had recently joined the Public as an associate artistic director, was a natural choice to direct. But “Richard II,” a real downer, now felt wrong.

What made “Merry Wives,” perhaps the least popular of Shakespeare’s comedies, the right choice? It has appeared on the Delacorte stage only twice before, in a 1974 production directed by David Margulies and in 1994 when Daniel Sullivan directed and Brian Murray portrayed Falstaff. The script, which resurrects the Falstaff character that Shakespeare created in “Henry IV,” reads like Elizabethan fan service. Set in a suburb of London and mirroring its conservative morality, the play also has a queasy undercurrent of xenophobia.

“It is closed-minded about others, and it’s nasty,” James Shapiro, a Shakespeare scholar in residence at the Public Theater. “It’s just a nasty play.”

And yet, unlike many of the better-known comedies — “As You Like It,” say, or “Twelfth Night” or even “A Midsummer Night’s Dream” — “Merry Wives” has little darkness and no death. A play about foolish men and the canny women who outsmart them, it has multiple meaty roles for actresses, a Shakespeare rarity.

Ayanna Thompson, another Shakespeare scholar who works with the Public, thought it had potential. So she and Oskar Eustis, the Public’s artistic director, suggested it to Ali, who had never read or seen it. “I cracked it open. And I thought, this is really funny,” Ali said. “This is so weird and slapstick and raucous.”

Still, he knew that it needed work. And he knew just the playwright to do it. He and Bioh had been collaborating on her play “Nollywood Dreams” when theaters shut down in March 2020. Having begun the pandemic with one collaboration, they would end it with another.

Bioh had never read “Merry Wives” either. But trusting Ali, she signed on. Together they relocated the comedy to 116th Street, among the African immigrants — from Ghana, Nigeria, Senegal, Sierra Leone — who live and work there.

In her script, Bioh imbued Shakespeare’s characters with the language and culture of these various communities, interleaving the Elizabethan speech with references to palm wine, jollof rice and cocoyams.

She rewrote the jokes that she didn’t understand and the ones that she figured her Ghanaian aunties and uncles wouldn’t get. “I don’t want them to feel alienated in any way,” she said. In her hands and in Ali’s, a comedy of exclusion became a celebration of difference.

“They managed to turn an ugly play into a beautiful one,” Shapiro said.

He found a dozen actors who could do it all, including Jacob Ming-Trent (“Watchmen”), who plays Falstaff, the comedy’s resident hedonist. Offered the role, Ming-Trent wept. “I did,” he said. “I cried. Playing Falstaff, playing a Falstaff set in Harlem? It doesn’t really get any better than this.”

During that first online rehearsal, the mood was giddy and somber by turns. “We’ve had such a hard year,” Ali told the company. “We’ve suffered so much. And we want to come back to a theater that is so many more things than what it was before.” Over two days of video meetings, the company agreed on a code of conduct for the rehearsal room, to make it a place of trust and mutual accountability. “We had to decide as a cast and crew what kind of room we wanted to create,” Ming-Trent said.

A few days later, they were able to meet in person. “I’m really just in shock,” Bioh said. She cried again. The actors, arranged in a wide semicircle, read the play, cracking each other up even seated, even masked.

Ming-Trent’s Falstaff spoke about having spent the past year inside, bingeing Netflix, bored out of his mind. “So can you blame me for checking out Madam Page and Madam Ford?” he bellowed. “Those are some merry wives! You feel me?” They felt him.

“We laugh all day,” said Susan Kelechi Watson (“This Is Us”), who plays Madam Ford, one of the merry wives. “We try literally everything. I’ve ridden Jacob Ming-Trent like a horse.”

That laughter only increased in late June, when a state directive eased some restrictions. The Delacorte, which had been capped at 18 percent capacity could now operate at 80 percent. When she heard the news Watson took a victory lap around the rehearsal room. “I’ve been in that audience so many times,” she said. “You want the whole crowd to be there.”

Guaranteeing that the whole crowd sees something wonderful, after so long away, creates a kind of stress. “There is pressure to deliver not just good acting, but to deliver something that people can bounce joy off,” Ming-Trent said.

Ali tries not to think about the pressure too much. Bioh just hopes the Senegalese woman who braids her hair likes it. Eustis bet that the production would have a secret ally in the audience. “Because we’re going to be celebrating each other,” he said.

And the creative team trusts that a production centered on the African diaspora will make the audience think about which communities we typically celebrate in the theater and beyond it. “We’ve been talking so much about how theater is going to be different when we come back,” Ali said. “In some radically subversive way, this play and this community and this particular production contribute to that conversation.”

After a year centered largely on Black pain, Bioh wants to offer a theatrical alternative. “Joy is a part of our experience as well,” she said. “So I’m glad people get to come back and laugh. It should be a good time.”

On a sun-strafed Monday in late June, with the seats too hot to touch, the cast gathered at the Delacorte for a first walk through of Beowulf Boritt’s streetscape set. Soberly, the heads of various departments outlined Covid-19 protocols, safety protocols, the code of conduct. An open manhole cover on the stage could constitute a fall hazard, one staffer warned. It had taken so much negotiation, testing and care to bring all of these people to the park, it would take so much more to deliver them to opening night.

But in that midday heat, those complications momentarily evaporated. Ali, in a baseball cap, shorts and a mask, leapt to the stage. He took in the hundred or so colleagues — actors, designers administrators, stage managers, house managers and compliance officers — arrayed below. And then, clutching the mic, he spoke. “We’re here,” he said. “We’re here. We’re here.”