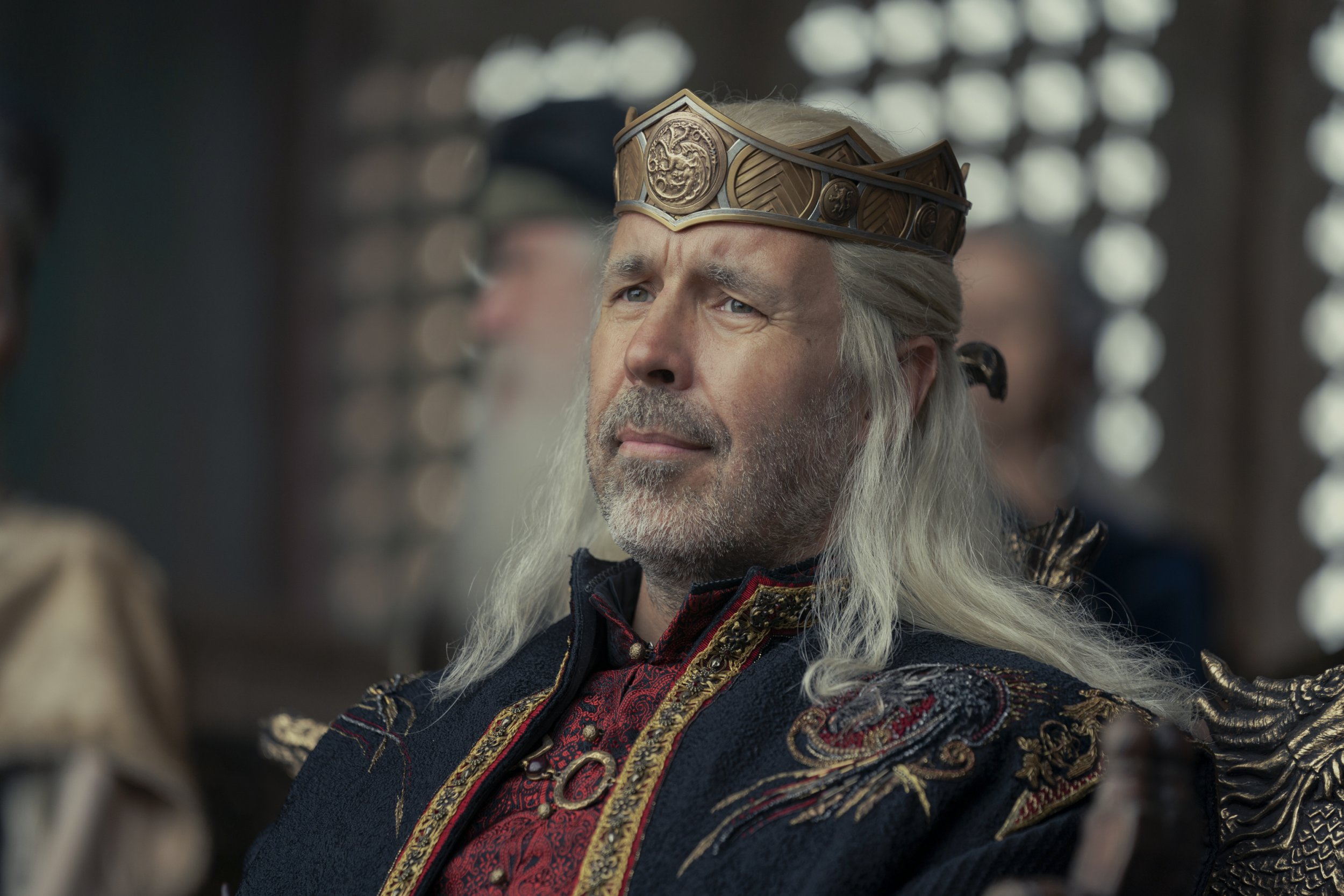 In 2006, I was 12-years-old and forming connections with pop music for the first time. I’d spend hours in the glow of my parents’ TV as my favourite music videos played on TMF (Freeview channel 21).

A particular favourite was Arctic Monkeys’ Leave Before the Lights Come On. A man prevents a woman’s suicide, then she becomes obsessed with him over the course of a day – the process is later revealed to be cyclical.

I didn’t know it then, but I’d just laid eyes on Paddy Considine, the future King Viserys, for the first time.

A year later, I was introduced to Hot Fuzz by a friend. Our Welsh camping holiday was flooded out, so we sheltered in my mum’s car with a portable DVD player.

There was Considine again, playing DS Andy Wainwright. The rest of the movie hit me like a train and I watched it on a weekly basis for years. ‘It’s alright, Andy, it’s just bolognese!’ Those who know are chuckling right now.

At 18, I was recommended Shane Meadows’ 2004 crime drama Dead Man’s Shoes, in which Considine plays a former soldier set on killing the smalltown bullies who abused his brother years before.

It’s a gripping, tortured revenge thriller in which Considine is a tour de force. I hadn’t seen pure, desperate rage channelled like that on screen before.

His credits and accolades are a mile long, but his big international break has always seemed forthcoming – until now.

Considine said it himself in an interview with The Hollywood Reporter: ‘I’ve been waiting for a role like [King Viserys], if I’m being honest.’ Little did he know that I’d been waiting for him to get a role like King Viserys. A leading part in a worldwide hit, a crucial cog in a huge machine that’s had his name on it for years.

As someone who read through George RR Martin’s Fire & Blood in preparation for House of the Dragon, Considine is already everything I hoped for when I heard the news of his casting.

Matt Smith was the big name on the poster, and he’s already proving to be a wonderful Daemon Targaryen, but Paddy’s was the one that assured me that this show was in safe hands worth trusting.

In act one of House of the Dragon’s big premiere, Considine cloaks Viserys in a tragic veneer. Ostensibly a laugher and joker, the layers peel away almost immediately – his seams plucked apart by the conflicting allegiances in his small council, his foolish desperation to produce a male heir eating his insides and physically exhausting his pregnant wife, Queen Aemma (Sian Brooke).

The Iron Throne then begins to reject him, with bed sores appearing on his back. And when Aemma’s labour takes a fatal turn, Viserys’ folly is laid out in front of him. Aemma winds up a spectator to her own death, her agency stolen away, and Viserys, shattered but in denial about his own role in his wife’s fate, is forced back to a grief-laden square one.

In act two, with his wife and heir gone, there are no layers left to peel back and no seams left to pluck. Considine retreats expertly into Viserys’ grief, completing the picture he purposely left unfinished in act one. He initially portrays Viserys as a man whose days consisted of spinning dozens of plates, then effortlessly transitions once those plates lie in pieces on the floor.

There’s a depth to Viserys on screen that isn’t present on the page. George RR Martin has said himself that Considine injects a ‘tragic majesty that [my Viserys] never quite achieved’.

As he chisels away at his ginormous scale model of Old Valyria, the melancholy and loneliness pouring out of him, Considine has devilishly turned Viserys into a man who can no longer hide from his own isolation.

Smokey Robinson & The Miracles once said: ‘Now there’s some sad things known to man, but ain’t too much sadder than the tears of a clown when there’s no one around’.

Heavy is the head that wears the crown, they say. But Considine ensures that the shoulders, legs, and feet of his weary, lonesome king, surrounded by the ‘crows’ of his small council, are heavier still.

By the time he removes Daemon from the line of succession, Considine has allowed the audience to track every step of Viserys’ descent from where we met him, to where he sits – half his family gone, bleeding from another wound inflicted by the Iron Throne.

With House of the Dragon securing an estimated 9.9 million viewers on opening night in the US, and with Considine being celebrated for his performance on both sides of the Atlantic, it appears that the big international break has finally arrived.

And wherever Considine goes next, I’ll be grateful that he stopped by my favourite fictional universe to give his best ever performance.