Margaret Thatcher, Britain’s first female prime minister, is one of the most important British figures of the 20th century — and yet these days, her distinctive public persona seems just as notorious as her inflexible right-wing policies.

Between 1979 and 1990, Thatcher delivered speeches to the public in a patronizing, slow voice, accompanied by a stern expression and under a thick starchy halo of hair. She had a very distinctive walk and relished her reputation as “the Iron Lady,” in public favoring a uniform of skirt suits with shoulder pads and a rigid handbag that seemed to be an extension of her arm.

These quirks and the pivotal role she played in the British 20th century mean many people have played Thatcher, in everything from films, plays, television shows and drag performances. In the fourth season of “The Crown,” which comes to Netflix on Sunday, Gillian Anderson takes on the challenge of inhabiting the outsize figure. We spoke to her and four other performers about their approach to playing Thatcher. These are edited excerpts from those conversations. 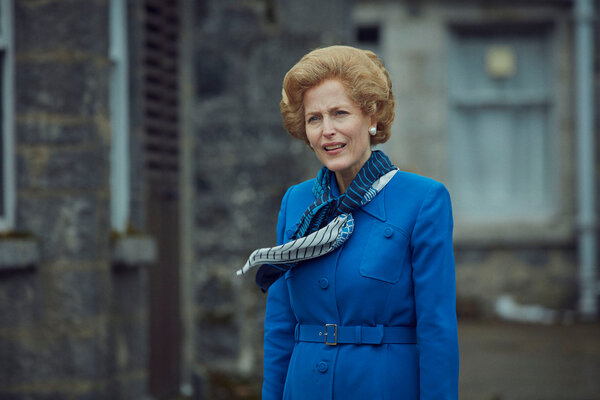 She’s one of those iconic historical characters. It’s hard to say no to being asked to play Margaret Thatcher, especially in a series like “The Crown.”

I came to it with a lot of assumptions based on other people’s opinions. I’ve found, particularly in regards to someone as divisive as Thatcher, that it’s really important to leave one’s own opinions at the door. It’s not about my beliefs, it’s about interpreting the character, inclusive of her beliefs and her motivations, as convincingly as one can.

There’s a lot of fittings for something like this. I wanted to have the opportunity of walking around, not only in the types of shoes that she would wear, but also in the padded suit that I wore to get a bit closer to her size, and the stockings that she would wear, and a dress. When I was able to walk around in my own time, in those things, even pre-wig, it did help. Fortunately, nobody walked through the door at any given time.

I always feel that to the best of one’s ability you’re trying not to mimic, because mimicking can sometimes feel shallow. I was trying to find a place where the voice sat within my voice, so that it didn’t feel like it was too stretched or over the top, or like it was an impression or a parody. You can only do as much as you can do, and then you just kind of have to let go.

After I left university in 1983, I was performing comedy in clubs in the north of England, and I got a reputation for being the guy that could do Margaret Thatcher. When I heard about the satirical puppet show “Spitting Image,” I wrote a letter to the producer. When I was given the job, I was little more than a student surviving on ketchup sandwiches, and suddenly I found myself playing Thatcher in what became this hugely successful show.

The key to “Spitting Image” is the puppets: they are the stars. It became clear that you couldn’t just do an impression, you had to caricature the voice that matched the puppet. The Thatcher puppet was much harsher, so I decided to combine her interview voice with her House of Commons voice. Then they started putting Thatcher in men’s clothes, and I had to make the voice less feminine.

When I see other actors doing Thatcher, I think they’ve missed the point if it’s very, very patronizing. The voice she had when talking to an interviewer, and she wants to get her point across but not make a mistake, was slow. But when she was normally chatting to people the voice was so much quicker.

I can’t say I gained affection for her. She’s like an old frock, now. A frock I don’t wear anymore, but that’s still in the wardrobe, just in case.

Played Thatcher in ‘The Long Walk to Finchley’ in 2008

The wonderful thing about the TV series “The Long Walk To Finchley’ is that it was a hilarious romp through the younger years of her life, as she was trying to get her career together.

I’m a Northerner, so portraying a political figure who had very little regard for my people was a welcome challenge. One of the fun things about “The Long Walk to Finchley” is the idea of Thatcher’s younger, cheeky self who was very aware of the power of her sexuality. She was assertive, and unapologetically so, at a time when being in her position wasn’t the most popular choice. There’s a rebelliousness in that, as conservative as she was politically.

There’s a physical process which basically starts at the end of “Long Walk To Finchley,” where she stops being an upright young woman and starts becoming almost birdlike. Her walk became incredibly tense, she poked her nose forward an awful lot. It’s almost like her body is less important than her point. The handbag also becomes an object with which to drive the point home.

Has played Thatcher in ‘Margaret Thatcher: Queen of Soho’ since 2013

After dressing up as Maggie for a Halloween party and realizing she is a very androgynous, very male character, I said, “Well, in a lot of ways she’s got the makings of a gay icon, but none of the love.” Section 28 was the law she passed banning the promotion of homosexuality. Jon Brittain — who co-wrote “Queen of Soho” and is a co-writer on this season of “The Crown” — and I took that as an idea and turned it on its head: What if she went into Soho in London on the eve of Section 28, met gay people, had a change of heart, gave up politics and became a superstar gay disco cabaret diva?

The joke of the play is that she is Margaret Thatcher, and she gets mistaken for a drag queen. Meryl [Streep] played her in “The Iron Lady” with a very straight back and she’s very refined and calm and cool, whereas in reality, Thatcher was like a spider, constantly scurrying to the next meeting, terrified that something was going on that she wasn’t aware of. She liked to know what was happening in the web, all the time. So I try and do that. And it’s the handbag and the pearls: once you get that handbag in your hand, it’s amazing how it becomes an extension of yourself.

We also do “Margaret Thatcher Queen of Club Nights,” which is basically an ’80s disco where she brings everybody together for a big old dance. All of a sudden, its 2 a.m. in Edinburgh, and you’ve got 300 Scotsmen screaming “Maggie! Maggie! Maggie!” You think, “Oh no I’ve gone too far. I’ve made her too lovable!”

Played Thatcher in ‘The Audience’ in 2013

Peter Morgan’s show “The Crown” grew out of his play “The Audience,” in which I played Thatcher. I couldn’t resist the role. I was madly prepping for my first table read, in the kitchen, and my then-partner was in the sitting room. When I finished, he came through and said: “Oh, my God, it was all I could do not to come into the kitchen and stab you with the bread knife.” There was so much worse for him to come. Can you imagine going to bed and your partner’s looking at Thatcher videos on YouTube?

Everybody’s going to start with her voice because it’s so distinctive, and that’s sort of a blessing and a curse. But it’s not just the voice with Thatcher, she also had quite a distinct physicality in how she moved. She was definitely a bird: she led with her beak.

I was playing Thatcher onstage when she died. When I came onstage that night there were none of the usual reactions, the laughter and applause. Just deathly, tumbleweed silence. It’s the taboo around not laughing in the moment of death. Me and Helen [Mirren, who was playing Queen Elizabeth II] were looking at each other and thinking “Take a very deep breath. We’ve got to show them that it’s OK.” And I think that night, we did achieve that. But it was a very curious experience.

It’s kind of cool, the Thatcher Club. And I’m the only one who got to play her when she died.