There’s a fun new spinoff of “What We Do in the Shadows” and a sadcom that is less sad than most. And there’s still time to catch up on “First Wives Club.”

This weekend I have … a half-hour, and I love ‘What We Do in the Shadows.’ 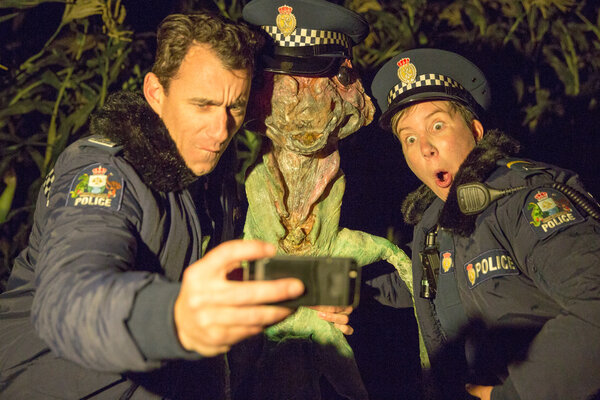 This goofball mockumentary series, created by Taika Waititi and Jemaine Clement, is technically a spinoff of the 2014 movie “What We Do in the Shadows,” but one need not be familiar with it or its superb current TV adaptation to enjoy hapless New Zealand police shenanigans. Officers Minogue and O’Leary (played by Mike Minogue and Karen O’Leary) investigate unusual goings-on — ghosts, werewolves, zombies — with expertise largely gleaned from pop culture, and the show gets a lot of mileage from its characters’ use of strained cop-speak to describe, say, a talking dog possessed by a demonic spirit. Episodes air Sundays on the CW and then arrive Mondays on HBO Max.

When to watch: Season 2 arrives Friday, on Hulu.

Aisling Bea created and stars in this dramedy about a woman who emerges from a major mental health crisis in Season 1 and by Season 2 has her sea legs a bit more, even as those around her — including her sister, played by Sharon Horgan of “Catastrophe” — seem to be flailing. One of the best parts of “Up” is that the characters make jokes for one another’s benefit, not for the audience’s, which adds to its realism and intimacy, and also alleviates much of the indulgent gloominess that plagues other auteur comedies. There are only six episodes per season, and you should definitely start with Season 1.

… a few hours, and I actually don’t like sadcoms

When to watch: Now, on BET+ or Showtime; or watch just the first three episodes on Amazon.

Season 2 of “First Wives Club” starts next week, but catch up now — the show is funny and smart and juicy. Michelle Buteau, Ryan Michelle Bathe and Jill Scott star as BFFs who are all at crisis points in their marriages, and while some of the general arcs of their characters’ issues resemble those in the 1996 movie, it doesn’t at all feel like a rehash. Instead, it’s like a zippy prosecco cocktail at brunch, like amazing gossip. If you wish the characters on “Insecure” liked each other more, or if you love domestic dramas but want something a little lighter and only a half-hour, watch this.