Our TV critic recommends checking out a distinctive stand-up special, a tender tennis documentary and a true-crime mockumentary you might have missed.

This weekend I have … an hour, and I want stand-up. 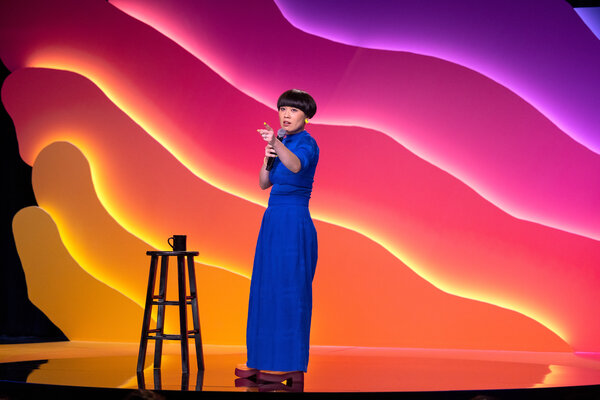 ‘Atsuko Okatsuka: The Intruder’
When to watch: Now, on HBO Max.

In her new special, which dropped at the beginning of December, the comedian Atsuko Okatsuka jokes about being raised by her grandmother, the odd dynamics that arose from learning dance routines with her husband and her ill-conceived choices for pandemic hobbies. (“Stop! That’s someone else’s interest,” her husband tells her when she is on the brink of planting lettuce.) Okatsuka plays around a lot with pace, using repetition to change the tempo of different segments, and her crowd work has a special and distinctive energy.

… a few hours, and I want a sports documentary.

‘Break Point’
When to watch: Arrives Friday, on Netflix.

This tennis documentary series comes from some of the same producers as the addictive “Formula 1: Drive to Survive,” and “Break Point” shares a similar tender affection for its subjects but has a more episodic style, with each installment focusing on only a few players at a time. Because there’s less emphasis on a season-long arc, one can pick and choose among the episodes: I especially liked Episode 4, which follows Ons Jabeur and Paula Badosa and outlines some of the financial realities of professional tennis and the unique pressures female athletes face. Five episodes drop now, and five more are scheduled to arrive in June.

… several hours, and I want a comedy.

When “Trial & Error” debuted on NBC back in 2017, it didn’t make much of a splash, but I wonder if this mockumentary would do better if it came out now, alongside quirky-ensemble comedies like “Ghosts” or “Abbott Elementary.” The show is set in a small town and follows a big-city lawyer and his high-profile defendants: in Season 1, a weirdo professor (played by John Lithgow), and in Season 2, a local celebrity (played by Kristin Chenoweth). “Trial” is warm and silly, and many of its characters would be at home in Pawnee or Flatch. If you’ve ever struggled to place the song stuck in your head and realized at long last that it was the intro music to “Serial,” watch this.