This Weekend I Have… a Half-Hour, and I’m the Black Sheep

In this quirky Spanish-language comedy, a ragtag group of lovable weirdos with a passion for scary movies and goth aesthetics launches a horror-production business to stage spooky spectacles. Think “What We Do in the Shadows,” but party planning. Julio Torres, best known for writing offbeat and wonderful “S.N.L.” sketches, created the show with Ana Fabrega and Fred Armisen, who also star. This is definitely the happiest show about faux exorcisms you will ever see. 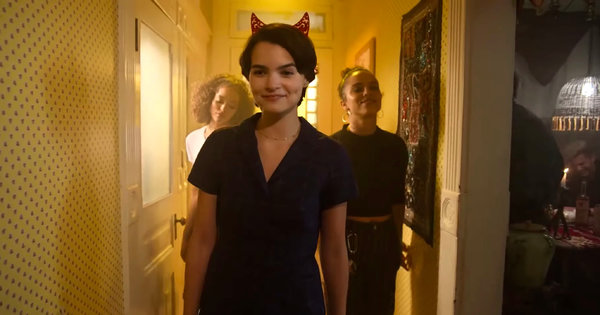 ‘Trinkets’
When to watch: Starting Friday, on Netflix.

Three high school girls from disparate social circles find themselves in the same support group for shoplifters trying to kick the habit — and then they form a super group of shoplifters, mightier and poutier together. Elodie (Brianna Hildebrand) is trying to cope with her mother’s death and her own relocation to Portland, Ore., and her new pals have plenty of their own struggles, too. It’s a sensitive, well-paced teen series that’s also part of the welcome half-hour drama trend; the 10 episodes fly by. If you miss “Life Unexpected,” watch this.

… Two Hours, and I Want Something Lovely

‘Terrence McNally: Every Act of Life’
When to watch: Friday at 9 p.m., on PBS (check local listings).

This feature about the playwright Terrence McNally is overflowing with love and wit and archival photos and footage, just like you’d want from any reliable biographical documentary. While the doc covers some heavy topics — homophobia, AIDS, alcoholism, heartbreak — the vibe is quite sunny, and McNally comes across as warmly candid, pretty happy and self-aware. Would that everyone in the throes of an addiction crisis could get a life-changing talking-to from Angela Lansbury.

Margaret Lyons is a television critic. She previously spent five years as a writer and TV columnist for Vulture.com. She helped launch Time Out Chicago and later wrote for Entertainment Weekly, among other publications. @margeincharge