I’m a single father. What can I watch with my teenage daughter that is complex enough to hold her interest but won’t have us both cringing at overt sex scenes? We’ve outgrown “Doctor Who” and got tired of “Gilmore Girls.” We both liked “Lady Bird” separately but wouldn’t have felt comfortable watching it together. We loved “Pushing Daisies,” “Poldark,” “Call the Midwife,” “The Crown,” and “Everwood.” “Monty Python’s the Life of Brian” and “Monty Python and the Holy Grail” went on her top-five list, as did “Anna and the Apocalypse.” We like quirky, complex and sweet. — Zane

Comedy-wise, your next moves are “Futurama” and “The Good Place.” They are indeed quirky, complex and sweet! It sounds like she likes a combination of highbrow and lowbrow, and “Futurama” especially scratches that exact itch. “The Good Place” is more earnest, but it’s not above sight-gags and comical vats of chili. 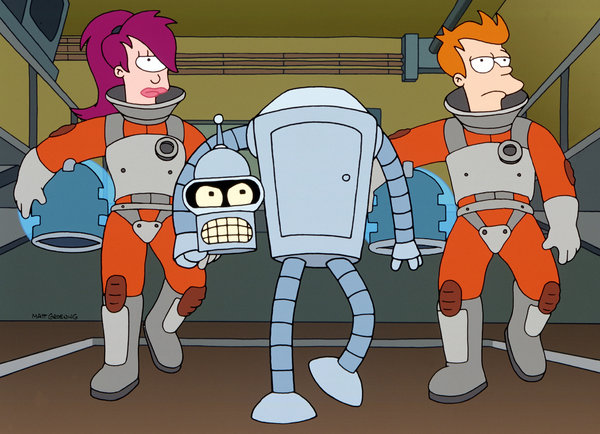 “Futurama” is a cartoon set 1,000 years in the future, in which our doofy protagonist, Fry, has been unfrozen. It’s created by Matt Groening, so it has a similar sensibility to “The Simpsons,” but it’s a workplace comedy, not a family one. “The Good Place” is set in the afterlife, so though it’s live-action, it often has a cartoony vibe.

For dramas, I think you’ll like “The Fosters,” one of the better teen shows of the past decade. It has the wonderful schmaltz of “Everwood” — let’s cry at every episode! — but with a firmer dramatic grounding. It’s less pat, and it’s more upfront with its traumas. The show follows Callie, a teenager newly out of juvie who gets placed with a foster family, conveniently named the Fosters. The mothers, Stef and Lena, are already parents to Stef’s biological son, Brandon, and the adopted twins Jesus and Mariana, and they wind up welcoming Callie and her brother Jude into the fold. While the show is extremely heartwarming, it’s also not afraid of tough topics: sex abuse, addiction, violence, injustice. It sounds like your daughter is mature — I mean, she liked “The Crown” — but just F.Y.I.

My two favorite shows are “30 Rock” and Seasons 1-3 of “Arrested Development.” I need some similar half-hour episodes as I drift off to sleep. Any suggestions? — Dan

I need a new comfort show after the second go-round of “The Office.” I watched “Parks and Rec” a while back but — nah. Tried “Brooklyn 99,” not working. “Russian Doll” — nah. My old tried and true is “Frasier,” but I could really use some help to stay inside with the air-conditioner! — Toni

You should both watch “Schitt’s Creek.” It has the exasperated rants and clever one-liners of “30 Rock,” the out-of-touch matriarch of “Arrested Development,” the ensemble chemistry of “The Office,” the occasional farce of “Frasier,” and above all, it’s happy and silly and easy to love. I think the first season is a little shout-y, though your mileage may vary; feel free to start with Season 2. (It’s all on Netflix, and Season 6 returns to Pop next year.)

I started watching “One Day at a Time” per your suggestion and loved it. I was wondering if you know shows similar to that comedy with background laughs that’s as recent as possible. — Cherian

First the good news: “One Day at a Time” has been rescued and will air new episodes in 2020 on Pop. Yay! In the meantime, it sounds like you’re seeking a comedy with an appetite for serious problems. “ODAAT” is still a sitcom, and it uses a sitcom style for everything, but sure, let’s talk about PTSD and homophobia and ignorance and divorce and addiction. So in that vein, I think you’ll like “Mom,” which is recent enough that it is in fact still airing. (Season 6 just finished on CBS, and previous seasons are available on Hulu.)

Allison Janney and Anna Farris star as a mother and daughter who were long estranged, and both battled some pretty serious addiction issues; when they reunite, they’re sober, and they attend A.A. meetings together on most episodes. The show has changed a lot over its run, so if you’re not digging the first season, jump ahead to Season 3.

If you’re fine with losing the live studio audience and want more of the loving-family-that-still-has-some-real-issues angle, you might also like “Kim’s Convenience,” a Canadian series (available on Netflix) about parents who run a convenience store and their two adult children.

Help me! I can’t stop watching “Parks and Recreation.” I love it so much but my children are so over it they don’t even want to be in the house with me anymore. “Parks and Recreation” is my macaroni and cheese. Leslie is my rocky road ice cream. It just feels so good. Any suggestions? — Amie

I’m not just saying this because you included foodstuffs in your letter, I swear: You should watch a few of the web series from Bon Appétit, namely “Gourmet Makes,” in which Claire Saffitz tries to make fancy versions of junk food; “It’s Alive with Brad,” in which Brad Leone teaches viewers fermenting techniques and sometimes travels; and any of the “[Person] Makes [Recipe]” videos that don’t seem to have a collective title, in which, you guessed it, people make recipes. (My favorite is “Chris Makes Lobster Rolls,” which I’ve watched no fewer than 10 times.) The videos are deeply informative, but they’re even more entertaining, and because they’re edited to include lots of what would otherwise be outtakes, they have a sort of mockumentary energy. It’s like the show and the making-of-the-show in one. There’s ample goofiness, real sincerity, differing skill sets — and meaningful affection, admiration, and frustration among all the chefs. It’s an ensemble comedy!

Are you looking for your next great TV love? (Or reckoning with your latest show divorce?) Send in your questions to [email protected] Questions are edited for length and clarity.

Margaret Lyons is a television critic. She previously spent five years as a writer and TV columnist for Vulture.com. She helped launch Time Out Chicago and later wrote for Entertainment Weekly, among other publications. @margeincharge