Huguette Caland, a provocative Lebanese artist who celebrated freedom of expression in both her color-drenched paintings and her unconventional life, died on Sept. 23 at her home in Beirut. She was 88.

Her death was confirmed by her daughter, Brigitte Caland. Her mother, she said, had experienced neurological problems since a fall in 2006 and by 2013 had lost her ability to paint.

Perhaps her most famous work was “Bribes de Corps” (“Body Parts”), a series of paintings, begun in the 1970s, showing fleshy, curvaceous forms that resemble parts of the female anatomy. “They are abstract and sensuous,” wrote The National, an English-language newspaper published in Abu Dhabi, “like a celebration of the plumpness of life.”

In her art and in her life, Ms. Caland reveled in that plumpness. “I love every minute of my life,” she told The Los Angeles Times in 2003. “I squeeze it like an orange, and I eat the peel, because I don’t want to miss a thing.”

Ms. Caland grew up in an elite political family. Her father, Bechara El-Khoury, was Lebanon’s first president after the country gained independence from France in 1943. After a turbulent tenure he was forced to resign in 1952. 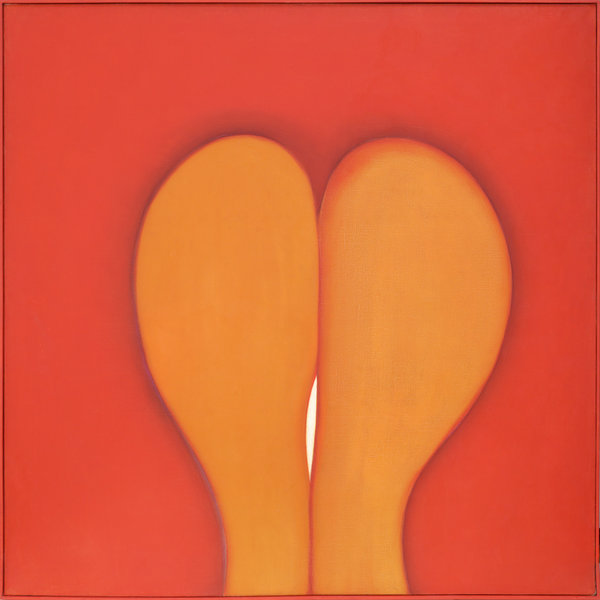 That same year she married Paul Caland, a French-Lebanese man she had been drawn to since she was 12. The romance was uncomfortable for her family: Not only was he French, and thus considered a colonizer, but he was also the nephew of one of her father’s political opponents. Once they were married, when she was 21, they both took lovers.

In 1970, at 39, Ms. Caland decided to bolt. She left her husband and their three teenage children and headed to Paris to find herself and flex her artistic muscles.

“I wanted to have my own identity,” she told The Los Angeles Times. “In Lebanon, I was the daughter of, wife of, mother of, sister of. It was such a freedom, to wake up all by myself in Paris. I needed to stretch.”

As she set off, she felt invincible.

“I thought that I was strong enough to confront the world with my work,” she said in a video interview for Detroit Public TV when she was in her 80s. “I thought I had wings to fly, and I said goodbye to everybody.”

Ms. Caland’s work has had solo exhibitions in galleries in New York and elsewhere, and she participated in major exhibitions like the “Made in L.A.” biennial at the Hammer Museum in Los Angeles in 2016, the 2017 Venice Biennale and the 2019 Sharjah Biennial in the United Arab Emirates.

Her paintings, drawings and designs are part of the permanent collections of the Centre Pompidou and La Bibliothèque National in Paris, the British Museum in London and the Los Angeles County Museum of Art.

Throughout her career Ms. Caland remained captivated by the female form, including her own, and constantly challenged conventional notions of beauty and desire.

She struggled to accept her own physical shape and often wore long, flowing caftans, which she also used as painter’s smocks. Her husband preferred her in haute couture, but she spurned fashions designed for tall, slim figures, especially after bearing three children.

At one point, the 5-foot-2 Ms. Caland weighed more than 200 pounds. “I began to get fat to see how one could live being fat, with a full life and without any restrictions,” she told an interviewer in 1974.

Her desire to live without restrictions — whether at the dinner table, at the easel or in bed — was the defining theme of her life.

Huguette El-Khoury was born in Beirut on Jan. 19, 1931. She spent much of her early adulthood taking care of her father as he aged. Only after he died, in 1964, when she was in her early 30s, did she start her studies at the American University of Beirut and begin to paint seriously. She majored in fine arts and graduated in 1968.

In prewar Beirut, she moved in cosmopolitan artistic circles and became something of a symbol of female emancipation in the Arab world.

But it was while in Paris that her sense of liberation began to appear in her work.

Among her creations were elaborately designed high-end caftans. She was wearing one in Paris one day in 1978 when she entered Pierre Cardin’s boutique.

“I love what you’re wearing,” the celebrated fashion designer told Ms. Caland, her daughter recalled. “Why don’t we do a collection together?” And so they did. True to form, Ms. Caland designed some with breasts, a belly button and pubic hair on the front and buttocks on the back.

In her mid-50s — after the death of her lover, the Romanian sculptor George Apostu, in 1986 in Paris — she moved to Los Angeles to be near her children.

There, she was able to buy an undeveloped lot in the Venice neighborhood from the artist Sam Francis. She created a spectacular home, a fortresslike chateau, that included a soaring cathedral space for her studio, where she entertained artist friends like Ed Moses.

In keeping with her quest for freedom, the home had no interior doors except in a small guest bathroom. Even the master bedroom and master bath went without. Doors, she said, made her feel claustrophobic.

For a time, all three of her children lived near her in California. Brigitte Caland said that her mother had never explained why she left the family, but that she and her brothers had been able to move on after she did.

“It made sense over time,” she said. “When you see your parents happy and you see them as an adult, you get over the fact that they left. In the case of Mom, it was not that difficult to accept. She was a very exceptional woman.”

In addition to her daughter, Ms. Caland is survived by her sons, Pierre and Philippe; her brother, Michel El-Khoury; and six grandchildren.

Despite having lovers and different lives, Ms. Caland and her husband remained close and never divorced. When he was ill, in 2013, she moved back to Beirut to be with him. He died that year.

To the end of her own life, her daughter said, Ms. Caland remained joyful and lighthearted. She often described herself this way: “I was born happy.”

Katharine Q. “Kit” Seelye has been the New England bureau chief, based in Boston, since 2012. She previously worked in the Washington bureau for 12 years, has covered six presidential campaigns and pioneered The Times’s online coverage of politics. @kseelye