KUMAMOTO, Japan — A week before the artist, author and architect Kyohei Sakaguchi planned to move into one of his celebrated “zero yen” houses, built from recycled materials, the catastrophic 2011 earthquake struck Japan. A tsunami engulfed the Tohoku region and the Fukushima Daiichi nuclear power plant collapsed. He had recently begun treatment for bipolar disorder. Overwhelmed, he left Tokyo and headed back home to the verdant coastal city of Kumamoto in southwest Japan, and abandoned the recycling project.

But what started off as artistic abandonment in fact marked an artistic shift. “After the earthquake, I got very depressed and suicidal, and I started to think about how to really care for myself,” Sakaguchi said in a phone interview. “That’s when I started to publish my phone number.”

It was the birth of a new suicide help line, directly to Sakaguchi’s personal cellphone. Leveraging his large online following, he began receiving calls from people, at first five a day, and eventually, close to 100. The volume of phone calls has only climbed with the pandemic, where suicides in Japan have been on the rise.

In returning to Kumamoto, Sakaguchi got a fresh start. While a modern city in the center, Kumamoto is just 30 minutes from both lush mountains and a tranquil sea. Sakaguchi moved into a neighborhood that was once the city’s historical center, and a walk around the block revealed 19th-century buildings and a traditional paper maker. The view from his vegetable farm by the sea frames what was a secret trading port for Chinese and Korean ships during the isolationist Edo period. 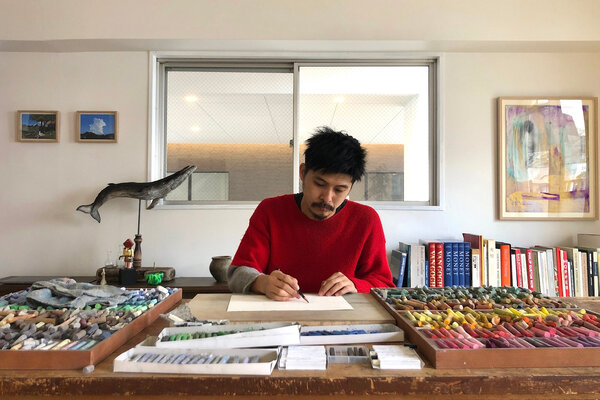 Exploring his heritage in Kumamoto and coping with bipolar disorder led Sakaguchi to all sorts of artistic forays. He wrote practical self-help books and answered phone calls, he painted abstract art and wrote experimental fiction.

“I think art is a technique for life,” he said. “I do what I do in order to keep living.”

Sakaguchi’s career began in architecture school (he graduated from Waseda University at 2001), where he was intrigued by a government report that estimated that there were 6 million vacant houses in Japan. “I asked my professor why we had to build new houses,” he said. “I thought it was very strange. I started thinking, is there a way to become an architect without building a house?”

He started to pay attention to people living on the streets of Tokyo who were building houses of their own — just not conventional ones. These houses are made from everything: cardboard boxes, scrap wood, vinyl sheets, discarded books, old telephone booths, reed screens. They’re furnished with art and some are equipped with electrical appliances powered by solar generators.

While some of these dwellings may violate local laws, Japan’s powerful constitution, which guarantees human rights and minimum standards of living, protects them and their builders. Through these houses, Sakaguchi saw a different way of thinking about architecture, and embarked on a full-fledged study.

Sakaguchi published a guide and an appreciation in the form of a photographic essay book, “Zero Yen House,” in 2004 showcasing the varied designs, and later held exhibitions and talks in Philadelphia, Berkeley, Calif., Nairobi, Kenya, as well as in Vancouver and Banff, Canada. The range of styles is remarkable: a mobile cardboard home built on a wooden cart, a house made out of a discarded playground slide, and even a house that incorporates a Shinto shrine. He went on to make videos on how to build your own mobile house.

“Sakaguchi’s work is part of a larger movement of artists responding to precarious and unsustainable aspects of Japanese society, as experienced in the cycles of boom, bust, and natural disasters over the past few decades,” said Jennifer Pastore, an editor for the art news site Tokyo Art Beat. The architect Shigeru Ban, for example, is well known for his temporary shelter and disaster housing. After Fukushima, Sakaguchi refurbished a crumbling house in Kumamoto as refugee housing and called it the “Zero Center.” At one point, 30-40 families displaced from Fukushima were living there.

“These houses are built on a shoestring budget by diverting and recycling the rubbish thrown away on the street,” Sakaguchi wrote for a 2006 exhibition at the Vancouver Art Gallery. “In this respect, these houses are built out of the resourcefulness of human nature, not by purchasing power.”

His interest in alternative dwellings stems from his disdain for the inequities in land ownership and housing in Japan. But as a chronic pessimist — “I think that society doesn’t change” — he is more interested in inventing new societies than in altering the present one.

After Fukushima, Sakaguchi engaged in various forms of artistry, at first as a form of self-care. “When I’m manic, I want to make a new government, create zero yen houses, but when I’m depressed, I want to write, I want to paint,” he said. His 2016 exhibition at the prestigious Trax gallery in Yamanashi Prefecture featured intense oil paintings: red, gray, teal, scratched and scarred depictions of torment, capturing the depths of depression that inspired him to start speaking with other suicidal people.

“There are suicide hotlines [in Japan], but oftentimes, you can’t reach a professional,” he said. “If 100 people call, 90-plus don’t get answered. As long as I was manic, I figured, let me do it myself.”

Sakaguchi said he had talked to more than 20,000 people since he started taking calls. In his 2020 book, “Kurushii Toki wa Denwa Shite” (“Call Me When You’re in Pain”), he wrote about his experiences with suicidal thoughts, answering calls from strangers, and his recommended strategies for coping. “I think my limit is talking to about 10 people a day,” he wrote.

Recognizing that he’s not a doctor, Sakaguchi approaches the task like an addict talking to other drug abusers. As Sakaguchi put it, “they’re asking their druggie senpai [upperclassman] how to cope with a bad trip.” He said he takes an active approach on these calls, giving callers assignments, tips and new directions to take their brains.

“Call Me When You’re in Pain” is part of a self-help trend in Sakaguchi’s recent nonfiction writing. Last year, he also wrote a resource for self-care titled “Make Your Own Medicine.” And perhaps his most-well known published work is his best-selling book, “Build Your Own Independent Nation,” in which he dissects ideas on government and land ownership, and proposes systems for economic and creative life. Alongside the book’s 2013 release, his work was showcased in “Sakaguchi Kyohei: New Government Exhibition” at the Watari Museum of Contemporary Art in Tokyo, which displayed detailed plans and models for a whole society; he also performed original songs at a packed concert in Shibuya’s Sakura Hall.

Sakaguchi points to his 2014 novel, “Genjitsu Dasshutsuron” (“Thesis on Escaping Reality”), a philosophical confrontation with depression, as the source text for his approach to art during these years. He wrote experimental fiction; he recorded his dreams. His one-of-a-kind short story, “Forest of the Ronpa,” was recently translated into English in Monkey magazine. Told from the perspective of a rat, the protagonist embarks on a journey across the sea and grapples with its dreams, destiny, and hunger. It represents Sakaguchi at his most introspective and elusive.

“The narrator is often inhabiting multiple states at once — past and present, asleep and awake, rat and human — and the language works to blur those lines,” says the translator, Sam Malissa.

At the same time, Sakaguchi released guitar albums of folksy lullabies. Last year, he started a vegetable farm. The experience inspired him to turn to gentler pastel and landscape paintings for coping and consolation, now compiled in “Pastel,” a new art book. Up until starting his farm, he had been painting every day, but never pictures of the real world.

“I had spent so long being overwhelmed by my inner world that I had never really seen the landscape around me,” he writes in the introduction to the book (translated by Malissa). “I used to hate the sunset so much, but on my way back from the vegetable garden it looks beautiful to me.”

It’s easy to understand how Sakaguchi undertakes many different projects simultaneously — to him, everything is connected. He connects his vegetable garden to his art, his art to his depression, Kumamoto’s history and literary heritage to his writing, and so on. This connectedness comes with the support and stability of his wife, Ryoko, and their children, who, at 12 and 7 years old, are now old enough to understand bipolar disorder. Sakaguchi uses the ingredients he grows in his garden for his family’s daily meals. His studio is surprisingly sparse and organized for someone working on so many kinds of projects.

And while visual art and architecture may have formed the bulk of Sakaguchi’s work, his career hinges more on his charisma and independence. “He has a strong reputation as a thinker,” said Chiaki Noji, of Tokyo Art Beat. While Sakaguchi’s work regularly shows in galleries, he doesn’t have a strong relationship with the Japanese art scene. “He’s less of a visual artist and more of his own construction,” said Yusuke Hashizume, an editor at the art magazine Bijutsutecho.

Sakaguchi makes a living exclusively by selling his art and books to fans. This makes him a rarity among independent artists in Japan, who usually get by with either part-time jobs or grants and residencies. “My work is not being bought by art collectors,” he said. “I’m not an activist, either. I consider myself a scholar.”

Everything seems to happen at once with Sakaguchi, and this year is no different. It kicked off with a gallery of pastels in Tokyo, and he has three books coming out in the next six months before a new exhibition at Trax gallery in Hokuto. He has discussed working with the local government in Kumamoto on suicide prevention, but ultimately, Sakaguchi prefers to go at his own pace.

Above all, he’ll be answering a ton of calls. The fight to survive lies at the heart of his art, no matter what direction the work itself takes.

“The best thing I can do is talk to someone on the phone,” he said. “That’s when I feel hope.”