Irvin Mayfield and Ronald Markham, a pair of musicians-turned-impresarios who had worked to put New Orleans’s jazz scene back on its feet after Hurricane Katrina, pleaded guilty on Tuesday to conspiracy to commit fraud, capping a precipitous fall from grace that now leaves them each facing up to five years in prison.

The charges stem from a yearslong scheme that federal prosectors said redirected over $1.3 million from the New Orleans Public Library Foundation into the New Orleans Jazz Orchestra, which Mr. Mayfield and Mr. Markham ran — and into their own pockets.

Mr. Mayfield, a trumpeter, and Mr. Markham, a pianist, had maintained their innocence since their indictment more than three years ago on charges that included fraud, conspiracy and obstruction of justice.

Prosecutors dropped all but one charge for each: conspiracy to commit mail and wire fraud. Mr. Mayfield and Mr. Markham signed a plea deal in July, but because of the coronavirus pandemic the courthouse had remained closed until this month.

U.S. District Judge Jay Zainey accepted the plea deal, and is scheduled to sentence the men at a hearing on Feb. 9.

Among the city’s leading trumpeters, Mr. Mayfield had founded the nonprofit orchestra in 2002, before Katrina devastated the city. After the storm, which took the life of Mr. Mayfield’s father, the pair redoubled their commitment to the orchestra, which aimed to celebrate New Orleans culture while going toe-to-toe with the finest straight-ahead jazz big bands on the international stage.

And they hatched a plan to create the New Orleans Jazz Market, a community arts center in the heart of the city aimed at giving the orchestra a permanent home and making jazz accessible to city residents of all ages and socioeconomic backgrounds.

“I’m born and raised in New Orleans and love where I’m from,” Mr. Mayfield told The New York Times in an interview last year. With the New Orleans Jazz Orchestra and the Jazz Market, he said, he sought to remind the world “that there’s a lot of beauty inside of this city, no matter how poor it is.”

During the 2000s and early 2010s, Mr. Mayfield’s profile in the city rose. He taught at the University of New Orleans, where he led the New Orleans Jazz Institute. President Barack Obama named him to the National Council on the Arts. He wrote a theme song for the New Orleans Hornets basketball team. The orchestra won a Grammy for its sophomore album, “Book One.” Mr. Mayfield leased his name and likeness to Irvin Mayfield’s Jazz Playhouse, a club on Bourbon Street.

And he joined the board at both the New Orleans Public Library and the Library Foundation, a charity that raises money for the city’s libraries.

From 2008 to 2010, the New Orleans Jazz Orchestra received steady funding from the city via the Wisner charitable trust, but that revenue dried up after Mayor Ray Nagin, a Mayfield ally, left office. By then Mr. Markham had joined Mr. Mayfield on the library foundation’s board; each served as its chairman at various points, and they adjusted the bylaws to give themselves greater discretion over the allotment of funds, according to federal prosecutors. Between 2011 and 2013, they made up the orchestra’s shortfalls by diverting over $1 million in charitable donations meant for the library toward the ensemble, the indictment said. 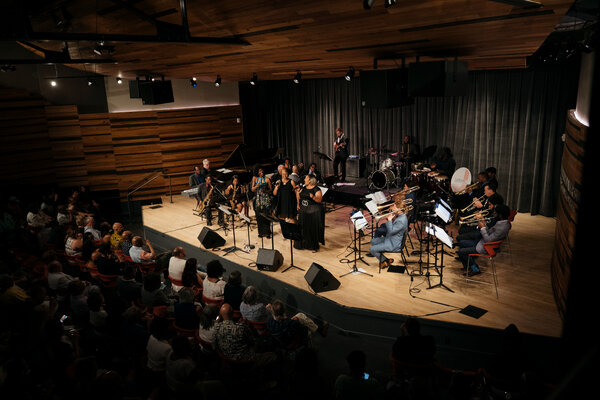 The money was used to pay for the band’s operating expenses, prosecutors said, but also for a long list of indulgences: It allowed, according to investigators, Mr. Mayfield to purchase a 24-karat, gold-plated trumpet; it paid for both men’s six-figure salaries, on top of their other income; and it furnished Mr. Mayfield with stays at luxury hotels.

After the pleas today, Mr. Kelly, the lawyer for Mr. Mayfield, said: “What Irvin and Ronald did was always what they thought in the best interest of the city, and we have standing down in Center City right now, an area that was predominantly poor and African-American, a state-of-the-art Jazz Market.”

“Were mistakes done in the process? Absolutely,” Mr. Kelly continued. “We’ll take responsibility for that today and through the sentencing.”

The New Orleans Jazz Market and its orchestra have persevered under the guidance of the drummer Adonis Rose, who took over as the orchestra’s leader after Mr. Mayfield and Mr. Markham were charged.

“The New Orleans Jazz Orchestra remains committed to its mission of sustaining and enhancing Jazz music and the musicians who create the music,” Latoya Bullard-Franklin, the orchestra’s board chairwoman, said in a statement. “We will continue to rebuild a sound reputation in the birthplace of improvisation — New Orleans.”