John Cassavetes’s “Opening Night” has long been catnip to theater fans. It’s easy to see why: The 1977 film is about an aging, hard-drinking actress, portrayed by Gena Rowlands, who becomes increasingly unhinged during a play’s out-of-town tryout.

Cassavetes shot a lot of it in front of a live audience in Pasadena, Calif., and the result constantly threads the line between fantasy and reality, performance and life.

Coincidentally, New Yorkers will be able to see two different theatrical works drawing from “Opening Night” this fall. And they are radically different from each other: The Australian import “The Second Woman” has a cast of 101 — woman and 100 men — and runs 24 hours; a French “Opening Night” features three actors and lasts 75 minutes. (The original film has a large ensemble and goes on for two and a half hours.)

“This is an experiment: don’t expect the movie or you’ll be disappointed,” the Parisian director Cyril Teste said of his “Opening Night” — a warning that applies to both of the new shows. In comparison, Ivo van Hove’s adaptation of “Opening Night,” seen at the Brooklyn Academy of Music in 2008, feels downright conventional in retrospect, despite his reputation as an iconoclast.

Mr. Teste’s piece, at the Alliance Française on Sept. 12-14 as part of the Crossing the Line Festival, does boast a formidable presence perfectly capable of matching Ms. Rowlands’s charisma: Isabelle Adjani, who joined the illustrious Comédie-Française troupe at 17, in 1972, and left two years later to become a movie star (“The Story of Adele H.,” “Camille Claudel”). 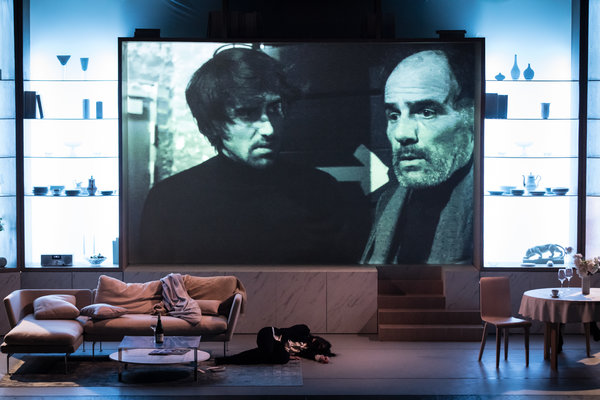 Ms. Adjani is exactly the kind of outsize performer suited to the flamboyant role of Myrtle Gordon, a leading lady haunted by a young fan who was hit by a car after trying to talk to Myrtle. And the role spoke to the French actress. “I found personal echoes with her journey, her emotions, her relations with the director and the other actors, her self-investigation,” Ms. Adjani said in an email. “Why do I do this job? What’s the point? Do I trust myself enough?”

But Mr. Teste did not want a star vehicle. He tried to evoke not so much Cassavetes’s film as the director’s process. His “Opening Night,” which he described in a FaceTime interview from France as a “filmic performance,” mixes live video and actors, and a degree of uncertainty was baked into the production. Back in February, Mr. Teste, 44, scrapped everything after the dress rehearsal and had his cast basically rehearse a new version live during the show’s premiere, in Belgium. Since then, each evening has been slightly different from the previous one.

“Everything that changes on that stage, including my part, is fine with me because that’s how you stay alert,” Ms. Adjani said. “My pledge as an actress is to never settle down.”

This approach is not far from Cassavetes’s own modus operandi: He often re-edited and sometimes even reshot his films, most notoriously “Shadows.”

“Doing the film isn’t interesting — I hope what we do is a tribute to Cassavetes via his working methods,” Mr. Teste said. “The process is the show.”

Despite its high-tech trappings, his production is very much actor-centered, as was Cassavetes’s work.

“John’s writing is all about characterization, to let actors perform in ways that they seldom get a chance to,” said Al Ruban, 86, a longtime Cassavetes associate who was the producer and cinematographer on “Opening Night” and is in charge of licensing rights to the filmmaker’s oeuvre. “When we shot the movies, it was really the characters driving each one of these productions. I think [stage] directors see that and see opportunities for them and for actors.”

“Opening Night” deals with the complicated professional and personal relationships among writers, directors and performers, but also between men and women — which may explain why the film, in which Myrtle has fraught relationships with the men around her, is an object of scrutiny right now.

That was one of the aspects that drew the young Australian theatermakers Anna Breckon and Nat Randall, both of whom wrote and directed “The Second Woman.” Their show borrows its title from the play within the film but uses fewer than 10 lines from the original.

Wearing a red dress and a blond wig to look like Myrtle, a woman performs the same scene 100 times with 100 male volunteers over the course of the show — the single performance at BAM starts Oct. 18 at 5 p.m. and concludes the following afternoon.

Speaking by Skype from Adelaide, Australia, where she and Ms. Randall were developing a new project, Ms. Breckon, 35, described the one scene as “two people negotiating a relation that has become toxic but are sufficiently attached to each other not to leave. The idea is that small emotional interactions say something about the way men and women treat each other in a particular cultural context.”

Ideally the men are nonactors, sourced from “spaces and communities that don’t necessarily have a strong relationship with the theater,” as Ms. Randall, 33, put it.

Their not being used to the stage helps spark variations and physical improvisation that evoke the often unpredictable energy of the Cassavetes piece, she said. The length adds an extra layer of potential tension. “It’s rough, it’s very hard to do because that element of surprise is really intense when you’re also quite fatigued and something radical comes in or something more aggressive or more sexual,” Ms. Randall said. (She created the part, but in Brooklyn there will be a new actress, whose name has not been announced yet.)

Ms. Breckon and Ms. Randall often talked about their production in abstract terms, with references to the Meisner acting technique and theories of the male gaze. Audience members unfamiliar with academic research should not fret, though: “The piece is quite funny,” Ms. Randall said, laughing. “It’s light and entertaining!”