After the first presidential debate, it looked as if the big question looming over the next one would be whether anyone could do anything to keep President Trump from constantly interrupting former Vice President Joseph R. Biden.

A week later, we’re wondering if it’s possible to hold a debate without creating a biohazard.

Last Friday, when the president announced that he had tested positive for the coronavirus, it cast the Sept. 29 debate in a horrifying new light. The president, huffing and shouting for 90 minutes, may have been spewing more than invective.

Suddenly we had to consider the chilling possibility that we had just watched one presidential candidate give another a deadly disease on live TV.

This has not — so far — come to pass. But everything we’ve seen since then has only made more clear that there is no good reason to risk anything like it again. Last week’s in-person presidential debate should be the last one until 2024. It’s time to take this show, and Wednesday’s scheduled vice-presidential debate, remote.

If the debates were a network reality show, there would be a scandal and production would be suspended. If the Trump White House — the current site of an active coronavirus outbreak it has worked to downplay and obfuscate — were a sports team, it would be having its games canceled, if not calling all of league play into question.

The debates, of course, are not entertainments. They’re political events, with all the stakes and pressures that come with that.

But they are also TV productions, with the same safety obligations as any other. And the Commission on Presidential Debates, as much as it may want to carry out its usual civic role, has enough evidence now that it cannot put on a safe production, in this pandemic, with candidates in person.

Any responsible TV debate right now has at least three questions to ask. First, are the rules and precautions sufficient?

There is some question about whether they were in Cleveland, though there is no universal consensus on what constitutes “safe enough” with a novel virus. The candidates were distanced, for example, which is meant to prevent droplet transmission.

But they were also unmasked and indoors, and as Ed Yong writes in The Atlantic, aerosolized virus can travel much farther. It’s unclear what ventilation or filtration measures were in place, or would be at a future debate.

Second, is anyone enforcing the rules? At the last debate, the answer was “hardly.” Despite safety protocols laid down by the debate commission, members of Mr. Trump’s entourage were allowed to remove their masks and sit through the debate in Cleveland. Among them was Melania Trump, who later tested positive for the coronavirus. 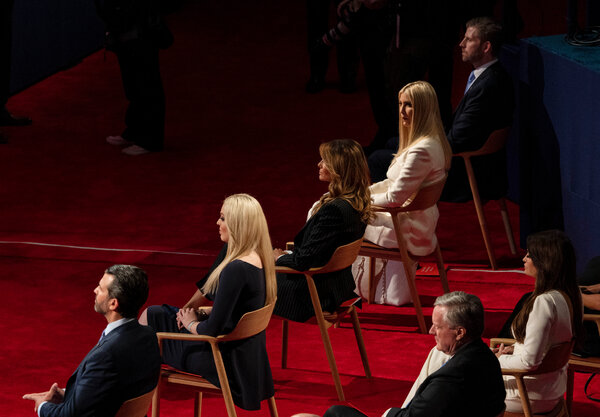 The president and his family also arrived too late in Cleveland to be tested for coronavirus on-site. Chris Wallace, the moderator, said that the candidates were supposed to have been tested before arriving, acting on an “honor system.”

Those aren’t the only concerns. What’s stopping a candidate from coming too close to another onstage, to rattle him or her or to provoke a stand-or-flee moment? What if one campaign’s response to “honor system” requirements is, “Make me”?

This brings us to the third question: Can we trust the parties involved? Bluntly, we can’t. More bluntly, we specifically can’t trust the Trump campaign.

The last week has proved it, both in the debate and, stunningly, outside it. Mr. Trump was almost certainly infectious in Cleveland. We don’t know when he had last tested negative. We may never know.

And the president’s health crisis has shown the lengths this White House will go to make sure we don’t know what it doesn’t want us to. The president’s doctor baldly evaded key questions about Mr. Trump’s symptoms and treatment. The White House has refused to do contact tracing around events that seem likely to have driven the outbreak.

Can people trust their health around someone from that hot zone? Can people stake their safety on a self-certified bill of health from this crew? Would you? (There have been questions about the Biden campaign’s transparency on health issues too, but they are of an entirely different magnitude.)

All the while, the White House continues to be the center of an outbreak. This involves not only the president and vice president but also their aides and staffers, and in turn their families and contacts. It puts at risk not only candidates but also debate crews, press, live audience members and support workers; a number of cases have been traced to the setup for the Cleveland debate.

The debate commission is already considering holding the second presidential debate remotely, which is a good start. It also plans to have plexiglass dividers between the candidates at the vice-presidential debate, though it is questionable how effective the barriers will be against aerosols.

And I can understand why the commission would be reluctant to give up on in-person debates. It’s ideal for an audience to see candidates, in the moment, respond to each other and the moderator, to read their body language and get their measure.

Having candidates take questions before the nation is crucial. And thanks to video technology, there’s no reason they can’t still do that, health permitting, just as John F. Kennedy and Richard M. Nixon did for their third debate way back in 1960, in TV studios on opposite coasts. (One side benefit: A remote production should make it easier to control interruptions by a candidate trying to derail the discussion.)

As for having candidates do all that in person, it’s not essential, just nice. And the crises and deceptions of the past week have gone to show why we can’t have nice things right now.

A still-infectious President Trump played down the seriousness of the coronavirus, as Joe Biden questioned “this macho” refusal to wear masks. Read the latest updates.

Many rules have changed during the pandemic, making it harder to figure out how to cast your ballot. This interactive guide can help you ensure your vote is counted.

Keep Up With Our Coverage

Get an email recapping the day’s news