When James Brandon Lewis plays the saxophone, he usually plants his feet shoulder width apart and bends a bit at the knee, swaying and tunneling into a rhythmic flow. As a bandleader, he almost exclusively performs his own compositions, which have melodies that roam, dart and soar but often stay grounded in a pulse.

Even when the music reaches a cruising speed, Lewis takes his time on the horn, more interested in making sure you get a clear taste of each note than in hurrying along to the next idea. Still, by the end of a song, you’ll feel as though you’ve traveled a good distance with him, put a few dozen miles on the odometer.

“Respect is important to me,” Lewis said on a recent Saturday morning, sitting in the sun at Tompkins Square Park in the East Village and explaining his commitment to clarity.

“There’s always this thing in the background with musicians, like, ‘Can you play?’” he said, referring to the strict meritocratic standards of the jazz bandstand. “But I put that into everything. If I’m going to write an essay, then I’ve got to be able to write well. It’s the same thing with poetry, same thing with teaching myself about visual arts: peeling back those layers.”

Since 2014, when he released “Divine Travels,” his second album, on Sony’s OKeh Records as a relative unknown, Lewis has earned a reputation as a pathfinder in jazz, and a guardian of tradition. Last year he won the rising star tenor saxophonist award in DownBeat magazine’s critics poll, putting an exclamation mark on his ascent.

In an artistically scattered age, when jazz is far too big and contested to be held in place, he has defined his own saxophone lineage — one that runs through Sonny Rollins, David S. Ware and J.D. Allen, constructed around ideals of deep seeking and rhythmic exchange — and kept building.

He’s also been amassing a catalog of poetry, creative essays and manifestoes that crack open some windows into his process. In an essay last year accompanying his album “Molecular,” he wrote: “It is far easier to pick up a drinking glass that is unbroken than one that has been shattered into a million pieces. I prefer the challenge of the latter. No longer capable of holding water, it instead offers a perfect image of freedom and possibility.”

Lewis’s new album, “Jesup Wagon,” out Friday, is a tribute to another polymathic figure who insisted on cutting his own path: the scientist and inventor George Washington Carver. Lewis read biographies about him before composing the seven tracks and two poems that appear on “Jesup Wagon,” and he became moved by how freely Carver had traveled between passions. But he couldn’t help noticing how much his legacy had been pruned by history, reducing Carver to his association with one thing: peanuts.

In addition to being a botanist, educator and symbol of Black pride in the brutal Redemption years, Carver was an accomplished musician and painter. He insisted that art and science, as processes of discovery, were never in opposition. And he was a pioneer of sustainable agriculture, whose findings sometimes put him at odds with private industry.

“He wasn’t a capitalist, in the greater scheme,” Lewis said. Although Carver was an inventor many times over, he added, “He didn’t hardly patent anything.”

At the turn of the 20th century, he took a significant pay cut to start the Tuskegee Institute’s agriculture department, which helped make this prominent Black university into an important research institution. “Jesup Wagon” takes its name from the carriage that Carver drove across the South during his Tuskegee years, conducting demonstrations for poor farmers on how to cultivate their land more sustainably.

This is Lewis’s ninth album as a leader, and his first with the new Red Lily Quintet, featuring Kirk Knuffke on cornet, Christopher Hoffman on cello, William Parker on bass and guimbri, and Chad Taylor on drums and mbira. Lewis generally prefers to play without a chordal instrument behind him, allowing him greater range of motion, and he chose this lineup because he wanted an earthen, folk-like texture, full of rich layering but not the restrictions of chords.

Sometimes elegiac, sometimes bounding forward, the tunes on “Jesup Wagon” are some of the loveliest compositions of his career, built around overlapping ribbons of melody. On “Experiment Station” — its title comes from Carver’s nickname for his lab — an opening section of gesturally bowed strings and legato horns falls into a marching rhythm, led by Taylor’s drums. As Lewis unfurls his solo, the cadence comes apart again, reappearing only occasionally, in moments of fleeting cohesion. 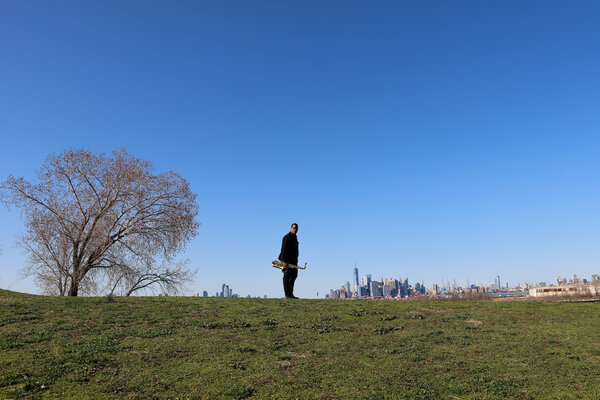 Born in Buffalo in 1983, Lewis is the son of a preacher father and a schoolteacher mother. He was exposed at a young age to a variety of music under the jazz banner, including free improvisation in the Charles Gayle tradition and the svelter disciples of Grover Washington Jr., another famous Buffalonian. What united them all was their attention to rhythmic pulse. “It’s a groove town,” Lewis said.

He picked up the clarinet at age 9, teaching himself to play basic melodies before enrolling at the city’s arts magnet middle school the next year. He studied with Carol McLaughlin and Dave Schiavone, prominent saxophonists and educators in Buffalo, while playing in church. There he found out what it meant for music to brush against the holy spirit, but he also learned the importance of carrying a melody faithfully, in lock step with the choir.

An honor student and an all-county band member, he went on to Buffalo State University before transferring to Howard University in Washington. He graduated with a degree in jazz performance, then spent time living with his father in Colorado, immersing himself in the Denver scene and continuing to play religious music. Then he enrolled at CalArts in Santa Clarita, Calif., where he studied with a faculty teeming with creative music talent, including the trumpeter Wadada Leo Smith, the bassist Charlie Haden and the drummer Joe LaBarbera, and his creative identity started to find fuller form.

Through a connection with the pianist Matthew Shipp, Lewis came to the attention of Parker, an important organizer on the New York scene and an esteemed bassist. Lewis invited him and the drummer Gerald Cleaver to make an album; in 2014 it was released as “Divine Travels,” turning heads in the jazz world.

Parker himself was impressed with the way that a young Lewis had seemed to both embody and transcend tradition. “He was prepared to take what he’d learned and forget it,” Parker remembered. “Which to me is always a good sign of a person that’s going to find his own sound.”

In the mid-2010s, Lewis started playing regularly with a Washington-based rhythm section: the bassist Luke Stewart and the drummer Warren Trae Crudup III. In 2014 all three of them joined the poet Thomas Sayers Ellis in Heroes Are Gang Leaders, a words-and-music ensemble that continues today, and has become a part of Lewis’s creative identity.

He now finds himself not only extending the lineage of his forebears, but attracting their admiration — even emulation. Rollins, 90, widely recognized as jazz’s greatest living improviser, has acknowledged his passion for Lewis’s playing. And J.D. Allen, slightly more than a decade Lewis’s senior and a major source of inspiration, said that he had been turned on his ear by Lewis’s trio with Stewart and Crudup.

Allen said his 2019 trio album, “Barracoon,” which featured a new and younger rhythm section, was directly inspired by the no-holds-barred punk energy of Lewis’s 2016 album, “No Filter.”

“‘Barracoon’ was my attempt to sound like the ‘No Filter’ trio,” Allen said in an interview. He recalled a recent conversation, in which he acknowledged to Lewis that mentorship had given way to exchange: “I told him, ‘I was copying you, man.’”

Articles in this series examine jazz musicians who are helping reshape the art form, often beyond the glare of the spotlight.

James Brandon Lewis and the Red Lily Quintet will play a concert celebrating the release of “Jesup Wagon” on Friday at Roulette at 7 p.m. A free livestream can be viewed at roulette.org.