Jameela Jamil has said she’s “thrilled” to be part of Disney’s Indian-inspired series, Mira, Royal Detective, “with a smart girl as the lead”.

The show is a mystery-adventure series set in fictional Jalpur, where Mira helps the prince save the kingdom.

Ex-T4 and Radio 1 presenter Jameela has been making waves playing Tahani Al-Jamil in Netflix’s The Good Place, which is now in its third season.

Mira, Royal Detective, will debut on Disney Junior channels in 2020.

The lead character will be voiced by newcomer Leela Ladnier, while Jameela will play Mira’s Auntie Pushpa. 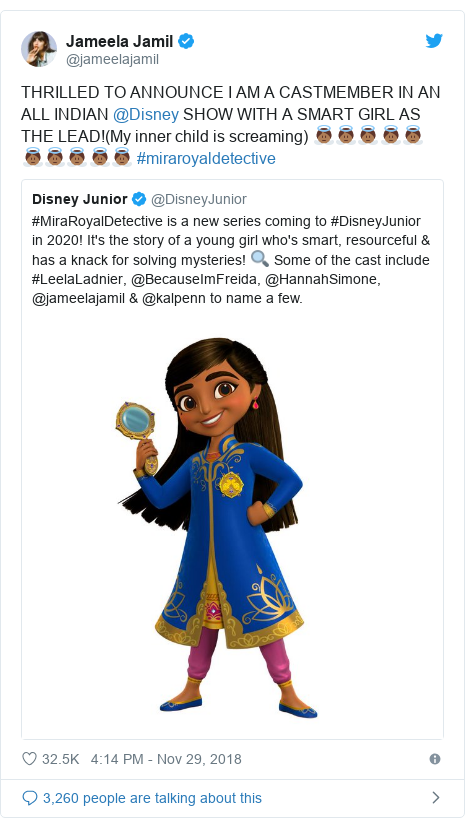 “We are eager to introduce kids and their families to the rich, diverse cultures and customs of India through Mira,” said Joe D’Ambrosia, Disney Junior’s senior vice president of original programming.

“We hope that she will encourage our audience to actively engage with the inspiring world around them, and appreciate the little details that make life extraordinary.”

Disney’s commitment to representing diverse cultures can be traced back to the 90s with films like Aladdin, Pocahontas, Mulan and its last traditionally animated film, The Princess and the Frog.

Its most recent success, 2017’s Coco, was inspired by the vibrant Mexican Day of the Dead holiday.

As well as winning awards including an Oscar and Bafta, it was also highly praised for its respectful portrayal of Mexican culture, reflected in its all Latino-cast.

Mira, Royal Detective is one of many of Disney Junior shows representing diverse cultures.

In 2016 the network introduced Elena of Avalor, a Latin folklore-inspired animated series about a teen princess in an enchanted fairytale kingdom.