SEOUL — Kim Tschang-Yeul, who devoted a half century to creating luminous paintings of water drops that are informed by the trauma of war and Eastern philosophy, died on Jan. 5 in Seoul, South Korea. He was 91.

Gallery Hyundai, which has shown his work since the 1970s, confirmed the death.

Rendered with meticulous care, Mr. Kim’s drops can seem to sit miraculously atop his raw canvases or be in the midst of gliding down them, leaving a trail of moisture. They glimmer with light and cast shadows, and while vividly present, they are always on the verge of evanescing. They made Mr. Kim one of the most celebrated Korean artists of his time.

Versed in Zen Buddhism and Taoism, he wrote in a statement for a 1988 exhibition that his aim in his tranquil paintings was “to dissolve everything into drops of water and return it transparently into nothingness.”

“When we have turned anger, unease, and fear into emptiness," he wrote, “we can experience peace and harmony.”

Reviewing a monograph of Mr. Kim’s work last June, Jason Farago wrote in The New York Times, “For Mr. Kim,” these water works “effect a strange melding of hyperrealism and abstraction, always trying but never succeeding to come to terms with the past.”

Growing up amid the Japanese occupation of Korea, the post-World War II division of the country and the Korean War, Mr. Kim was a key member of a generation of artists who adopted radical practices in the 1950s in South Korea and then spread them beyond their borders.

His breakthrough came in the 1970s, when he was in his 40s, impecunious and working in a former stable in a Paris suburb. Unhappy with a painting, he splashed water on it one night intending to clear away the paint. When he returned in the morning light, he was transfixed by the remaining drops. “It was spectacular,” he said in a 2016 interview with the Yonhap News Agency. “It was like a symphony. I took pictures of them and started thinking about how to express them on a canvas. Then began my lifelong task.”

Kim Tschang-Yeul was born on Dec. 24, 1929, the eldest of six children, in the town of Maengsan, in the South Pyongan province, which is now part of North Korea. His father, Kim Dae Gwon, worked for the Ministry of Agriculture; his mother, Ahn Young Geum, was a homemaker. 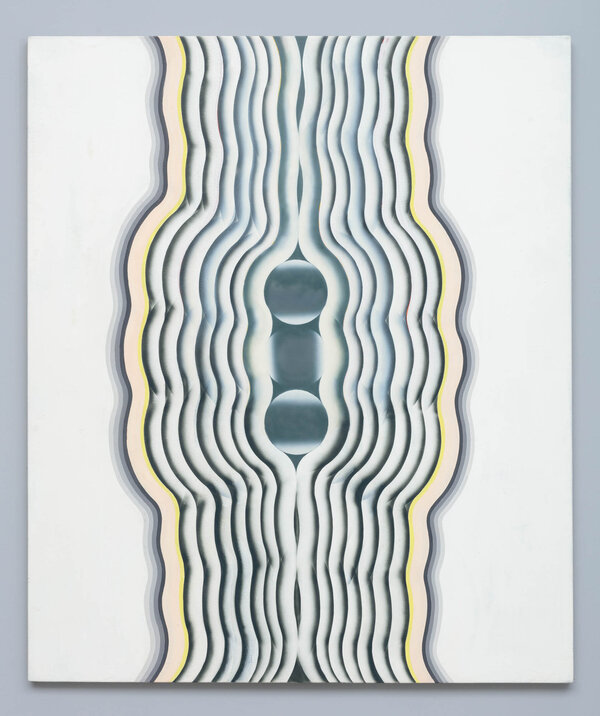 As a young child, Mr. Kim learned Chinese calligraphy from his grandfather. He took an early interest in becoming an artist and honed his skills while attending high school in Pyongyang, visiting the library to learn art history. Arrested in 1946 while in possession of an anti-Communist pamphlet he had written, he was released after 10 days and then fled to Seoul, where he lived in a refugee camp for a year.

Mr. Kim studied art at Seoul National University until war broke out in 1950 and the Communists seized the city. Sights of the carnage would stay with him. He eventually escaped and worked as a police officer on Jeju island, south of the mainland. The fighting ended in 1953 with three million dead, including one of his sisters, who was 15. Returning to Seoul, he worked briefly as an art teacher.

“All I could think of was weeping or yelling,” he told the critic and curator Michel Enrici in a French-language interview published in 2018. “I went back to painting in order to give vent to my rage.”

In the coming years, Mr. Kim channeled the violence of the conflict in abstractions with slashing marks and brooding colors. With compatriots like Chung Chang-Sup and Park Seo-Bo, he studied paintings in magazines by the Abstract-Expressionists in the United States and by Art Informel artists in Europe. In 1957 he helped establish the Modern Artists Association, which presented exhibitions at a time when Seoul had few galleries committed to emerging art. International opportunities followed.

Many pieces from this formative period were lost. “Most of us were living in tiny rooms, moving from place to place, and there was no space to put the paintings,” Mr. Kim once said. They abandoned paintings in the street, he said, and even declined to take photos of their compositions, seeing such documentation “as a reflection of institutional thinking.”

Government restrictions and financial concerns made foreign travel difficult for South Koreans at the time, and when Mr. Kim’s work was included in the Paris Biennale in 1961, he did not visit. In 1965, however, he made a trip to London and Paris and finally stopped in New York, where he was supported by a Rockefeller Foundation grant secured with the aid of Kim Whanki, a venturesome Korean painter there.

In New York, Mr. Kim met other expat artists, including Nam June Paik, who was already notorious for freewheeling performance art like smashing a violin onstage. But Mr. Kim felt out of place, culturally and artistically, with Pop Art ascendant. “I felt like a little Asian crushed by an enormous rock,” he said.

He studied at the Art Students League of New York and honed an abstract style suggestive of Op Art, with smooth, oozing shapes — “paintings of the intestines,” he called them.

In 1969, Mr. Kim decamped to France, where he would settle while also keeping a residence in South Korea. In 1970 he met Martine Jillion, and they married in 1972, around the time he had his eureka moment with the drops.

Once he found that motif, critical and commercial success came fast, and he was soon showing regularly in Europe, North America and Asia. He conjured his ephemeral drops in airbrush and oil, hovering over or soaked into materials like hemp canvas, linen, wood, newsprint and Korean hanji paper made of mulberry bark. In the 1980s, he began integrating Chinese characters, using text he had learned from his grandfather.

His beguiling water drops might signify purity or cleansing, but the process of making them was more important to him than their symbolic weight. “I’ve dissolved and erased horrible memories by painting them countless times,” he told Yonhap.

Major institutions, including the Jeu de Paume in Paris and the National Taiwan Museum of Fine Arts in Taichung, have hosted retrospectives on Mr. Kim’s work.

In 2016, Jeju’s government inaugurated a museum dedicated to him on the island where he had been stationed six decades earlier, and he donated more than 200 works for its collection. His 14th solo show at Gallery Hyundai, “The Path,” closed in November, bringing an end to a career of steady, continuous invention.

“I lived with the seriousness of someone who has caught a tiger by the tail,” Mr. Kim said in the interview with Mr. Enrici.

“Once you have caught hold of a tiger’s tail, you have to follow it all the way to the end, on pain of being eaten alive.”