It seems as though Princess Charlotte is about to make history with her new title.

After months of contemplation, it seems King Charles has decided to give Charlotte the title of Duchess of Edinburgh, since she is set as the third in line for the throne. As a way of “honouring the line of succession,” Charles has decided to bestow the title onto Charlotte, which is a subtle nod to the late Queen Elizabeth, who previously held that title from 1947 to 1952 before ascending to the throne.

A source said to Daily Mail, “Discussions are underway, but the favoured outcome for the King is that this title ought to go to Princess Charlotte. It would be a fitting way to remember the Queen – who, of course, had the title Duchess of Edinburgh – and a way for His Majesty to honour the line of succession.”

As we stated, Charlotte is third in line to the throne after her father Prince William, and her older brother Prince George. Now the history-making part is this: after her mother Kate Middleton was pregnant with her, the Windsor family changed the rules on girls having the same rights as boys. This means that Charlotte’s position wasn’t affected when her younger brother was born, meaning she kept her place in line for the throne.

But back to the title: the late Queen wasn’t the only one who held that esteemed title. The title of Duchess of Edinburgh is one of the most senior in the Royal Family, with only four women being given this title in history. The first one to be granted the title was Princess Augusta of Saxe-Gotha in the 18th century, followed by Grand Duchess Maria Alexandrovna of Russia. Then it was Queen Elizabeth and then Camila, who is now considered the Queen Consort.

And now it seems Charlotte may be the fifth woman to receive this title. We’re sure her late great-grandmother would be proud!

Queen of Our Times by Robert Hardman

Queen Elizabeth II has been a global icon for 70 years. Since ascending to the throne at the age of 25, the long-reigning sovereign has approached her historic role with poise and quiet confidence. But behind the veneer of monarchy, Queen Elizabeth has been the leader of a family and household through good times and bad. Robert Hardman’s new biography, Queen of Our Times, takes longtime royal fans behind the veil with unprecedented access to royal records, friends, staff, and more, as the legendary leader and the House of Windsor celebrates her landmark reign. This will surely be known as the definitive book on Queen Elizabeth II.

'Queen of Our Times' by Robert Hardman 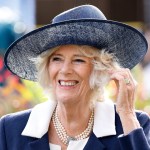 Before you go, click here to see the best photos of Queen Elizabeth II before she was queen.