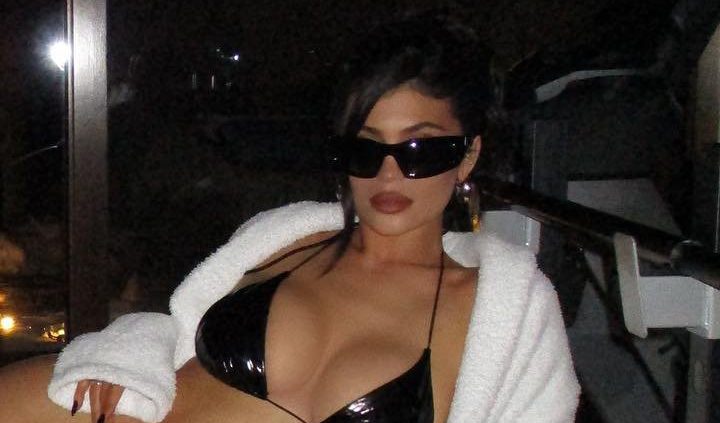 Kylie Jenner proved mums have more fun during a mini-break to Aspen after posting pictures in an itsy bitsy black PVC bikini.

The 25-year-old beauty mogul showed a fair amount of skin while braving the freezing temperatures during a late-night hot tub dip on Sunday.

Jetting off to the snowy hills, the star took time out from her busy life in Los Angeles alongside model sister Kendall Jenner, 27, who joined her on the trip.

The influencer kept fans up to date with her travels and posed for the snaps that would end up on her social media profile with friend Yris Palmer – who twinned in a similar black bikini and sunglasses.

Kylie posted the racy pictures with the caption: ‘Midnight swim’.

Mother to two children that she shares with rapper Travis Scott, the famous face pulled her hair back into a stylish up-do and finished off her sizzling style with a pair of black sunglasses.

Underneath the image, sister Khloe Kardashian couldn’t contain her excitement at the sight of her younger sister.

For her next two messages of admiration she left: ‘Ummmmmmmmmmm imm just not ok.

Finally, she finished off the outpouring of praise with a simple ‘wow’.

Kylie also sat for a series of pictures before descending on the hot tub in a fluffy white gown and beige furry boots that reached her shins.

Fans rushed to compliment the mother on her post-baby body with one writing: ‘The fact that you’ve created 2 humans and still have this body ody ody gurl! Yaaas [sic].’

Another typed: ‘I don’t think you’re cold with all that hotnesssss [sic]’.

Offering more behind-the-scenes looks at her glamorous winter getaway, the TV star uploaded a mirror selfie to her Instagram stories while out shopping with Kendall.

This time the lip-kit business women donned a more weather-appropriate outfit and warned off the cold in a black coat with a white shearling trim and black oversized trousers.

She once again sported black sunglasses and kept her long hair off her face with a black headband.

The Kardashian star’s trip came after she hit headlines for confusion over her baby boy’s name.

Changing it, then not changing it – fans couldn’t keep up with the mother-of-two as she um-ed and ah-ed.

In a scene filmed several months ago for her family’s reality show, the Kylie Cosmetics founder confirmed that her newborn was called Wolf despite announcing plans to change his moniker.

She kept everyone guessing however when she rounded off her final confessional of the show by hinting: ‘My baby’s name is still Wolf, I’ll let you guys know when I change it. Maybe I’ll tell you guys in season three.’