On Wednesday, President Trump answered questions about the memorandum of a July call with the Ukrainian president, Volodymyr Zelensky. The written account had Trump asking Zelensky for a favor in the form of corruption investigations connected to former Vice President Joe Biden.

“And these notes that they released of this phone call make Trump look — and I don’t want to get too technical — bad.” — STEPHEN COLBERT

“Following House Speaker Nancy Pelosi’s announcement of impeachment proceedings against President Trump, Trump tweeted this morning that there is, ‘no president in the history of our country who has been treated so badly as I have.’ Even more amazing, he tweeted it from the Abraham Lincoln room in the John F. Kennedy Library.” — SETH MEYERS

“Who would believe Volodymyr Zelensky would be his Monica Lewinsky?” — JIMMY KIMMEL

“He gave a news conference and he called his phone call with Ukraine’s president ‘perfect.’ He said it was perfect. Then Nancy Pelosi said, ‘I agree. It was fantastic.’” — CONAN O’BRIEN

“He’s right, it was pretty great. It was a perfect phone call. Pleasantries were exchanged. Friendships were built. Crimes were committed. I have no notes. I give him five stars.” — JIMMY KIMMEL

“This is what Trump does. He does this all the time. Like Trump is the only person who would do something so bad right out in the open that it makes you question whether it’s actually bad, right? It’s like a powerful thing — it’s the same way that Kanye can walk around basically in rags but because he does it so confidently we just go, ‘I guess that was the style now. I wish I looked like I was attacked by hungry badgers?’” — TREVOR NOAH

“I think he wants to admit he colluded with a foreign power — he’s proud of it. He doesn’t understand what all the commotion is about. He would do it again. He’s Jack Nicholson in ‘A Few Good Men,’ although in this story, there are no good men. It’s all bad men.” — JIMMY KIMMEL

“It actually would have been better for Trump if the whole transcript had just said ‘unintelligible.’” — SETH MEYERS

“A lot of people are calling the transcript a smoking gun, which explains why today Trump said, ‘O.K., now I’m ready for gun control.’” — JIMMY FALLON

“When Ukraines, it pours.” — JIMMY KIMMEL

“Some of the transcript is a little hard to follow because Zelensky’s English isn’t very good and, well, Trump’s is even worse.” — JAMES CORDEN

“And you might be wondering, ‘If this phone call is so damning, why did Trump even release the transcript? Only an idiot would do that.’ Exactly.” — TREVOR NOAH

“The White House released the transcript, Congress has officially received the full whistle-blower’s report, and we’ll have to wait to find out what happens next. And it could be anything. We could find out that Mike Pence also pressured Ukraine on a call or we could find out the secret identity of the whistle-blower. Spoiler alert: I think it is Tekashi 69. That guy’s snitching on everybody.” — TREVOR NOAH, referring to the rapper who became a witness for the prosecution in a racketeering and firearms case

Biden appeared on “Jimmy Kimmel Live” and shared his thoughts on the Trump whistle-blower and the potential for impeachment.

What We’re Excited About on Thursday Night

Senator Kamala Harris, the Democratic candidate for president, will sit down with James Corden on “The Late Late Show.” 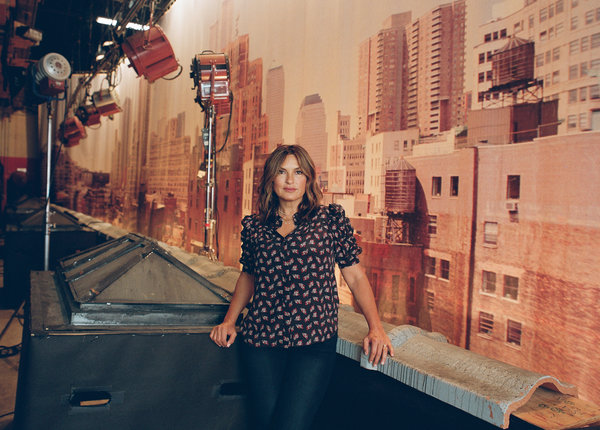 As “Law and Order: Special Victims Unit” heads into its 21st season on NBC, the series star Mariska Hargitay shares how the show has inspired much-needed cultural conversations on sexual violence.