“It’s an age-old strategy: After a devastating loss, just say you won,” Stephen Colbert joked of Giuliani on Tuesday. 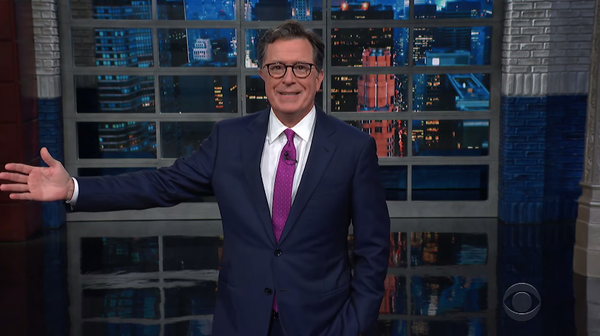 Welcome to Best of Late Night, a rundown of the previous night’s highlights that lets you sleep — and lets us get paid to watch comedy. Here are the 50 best movies on Netflix right now.

“According to one new book, at the White House election night party, some people thought Rudy Giuliani may have been drinking too much. The other people were Rudy Giuliani,” Stephen Colbert joked on Tuesday’s “Late Show.”

“That’s right, Rudy was in rough shape on election night. He was slurring, sweating, confused — then he started drinking.” — JIMMY FALLON

“Yeah, and if that didn’t work, Rudy’s other plan was for Trump to legally change his name to Joe Biden.” — JIMMY FALLON

“The Biden administration has reportedly run out of ideas to encourage more people to get the coronavirus vaccine. Luckily, the virus is coming up with new ideas all the time.” — SETH MEYERS

“I saw that tomorrow, Olivia Rodrigo is going to the White House. She’s going to team up with President Biden and Dr. Fauci to make videos about getting vaccinated. When his staff suggested bringing in popular musical artists, Biden was like, ‘Great idea. How about Glenn Miller or the Andrews Sisters?’” — JIMMY FALLON

Amy Poehler joined Seth Meyers on “Late Night” for a new edition of “Really!?!” devoted to billionaires in space.

The comedian Phoebe Robinson is the guest host on Wednesday’s “Jimmy Kimmel Live.”

This year’s Emmy nominations include several firsts, including “Pose” star Mj Rodriguez as the first trans performer to be nominated in a leading acting category.