Leslie West, whose meaty guitar riffs and snarling lead lines powered the hit band Mountain through “Mississippi Queen” and other rock anthems of the 1970s, died on Wednesday in Palm Coast, Fla. He was 75.

The cause was cardiac arrest, said a spokesman, Steve Karas.

Mr. West had battled various health problems over the years. In the early 2000s he had bladder cancer. In 2001 he had his lower right leg amputated because of complications of diabetes.

Mr. West, who struggled with his weight for most of his life, used his ample size to his advantage onstage. In an era ruled by rail-thin rock stars, his physique stood out. His guitar tone matched it in girth: It was uncommonly thick, with a vibrato that could shake with earthquake force.

His singing style mirrored his guitar playing, marked by barking declarations that at their most stentorian could pin a listener to the wall. The weight of Mr. West’s sound has been cited as an early example of heavy metal, though Mountain offered a striking contrast to its more forceful songs with other numbers that displayed the prettier vocals and more elegant melodies of the band’s bassist, co-lead singer and producer, Felix Pappalardi.

When Mountain first appeared, Rolling Stone called the band “a louder version of Cream,” a comparison underscored by Mr. Pappalardi’s role as the producer of many of that British band’s best-known recordings.

One song he produced for the first solo album by Cream’s bassist and singer, Jack Bruce, “Theme for an Imaginary Western,” became far better known in the version cut by Mountain for its debut album, “Climbing!,” released in 1970. “I idolized Cream,” Mr. West told Guitar World magazine in 1987, “and here was a chance to play with one of the best musicians in rock ‘n roll and one of the best writers, too,” referring to Mr. Pappalardi. 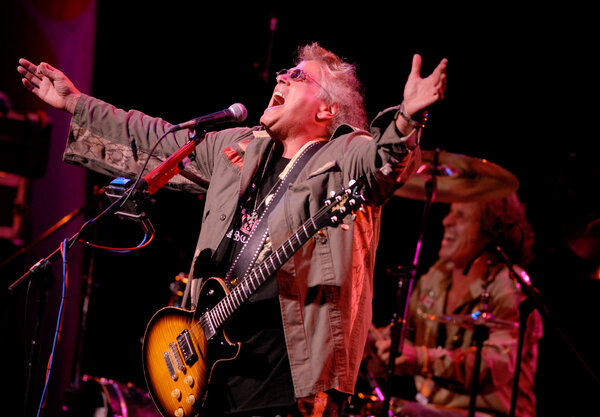 Deepening the bond between the two bands, Mr. Bruce joined Mr. West and Mountain’s drummer, Corky Laing, to form the power trio West, Bruce and Laing after Mr. Pappalardi left Mountain in 1972. That amalgam reached No. 26 on the Billboard chart with their debut album, “Why Dontcha.” But Mountain sold better, earning two gold albums, “Climbing!” and its follow-up, “Nantucket Sleighride,” which each broke Billboard’s Top 20 in the early ’70s.

Leslie West was born Leslie Weinstein on Oct. 22, 1945, in New York City to Bill and Rita Weinstein. His mother was a hair model, his father the vice president of a rug shampoo company. He grew up in the suburbs.

When Leslie was 8, his mother bought him his first instrument, a ukulele, but he became entranced with the guitar after seeing Elvis Presley play one on television. He bought his first guitar with the money given to him for his bar mitzvah.

After his parents divorced, he changed his name to West, and upon graduating high school he decided to go directly into the music business. “I went to N.Y.U. — New York Unemployment,” he jokingly told The News-Times of Danbury, Conn., in 2005.

His professional career began in a band he formed in the mid-1960s with his brother Larry, who played bass. The band, the Vagrants, was a blue-eyed soul group inspired by a hit act from Long Island, the Rascals. The two bands played the same local clubs, as did Billy Joel’s early group, the Hassles.

Improbably, Vanguard Records, better known for folk, jazz and classical artists, signed the Vagrants. Their first single, “I Can’t Make a Friend,” a garage rocker, became a minor hit in 1966. Mr. Pappalardi, who produced some of the Vagrants’ songs, helped them obtain a new contract with Atco Records, a subsidiary of Atlantic, for which they cut a cover of Otis Redding’s “Respect” that earned East Coast airplay in 1967.

But Mr. West yearned to record something heavier, so he left to make a solo album in 1969 whose title, “Mountain,” was a reference to his imposing size. Produced by Mr. Pappalardi, it featured many songs co-written by the two, including “Long Red,” which, in a live version backed by the drummer N.D. Smart, featured a drum break that inspired one of the most popular samples in hip-hop history, heard on more than 700 recordings, including ones by Public Enemy, Jay-Z and Kendrick Lamar.

By the time “Mountain” appeared, Mr. West had persuaded Mr. Pappalardi to form a band with him named for the album. “I said, ‘There’s never been a fat and a skinny guy onstage,’” Mr. West told Guitar World. “‘We can’t miss.’”

One of Mountain’s first gigs was at the Woodstock festival, a booking the band received because it shared an agent with Jimi Hendrix. The band’s debut album was released the next spring, with Steve Knight, who came aboard for the Woodstock performance, on keyboards, and Mr. Laing on drums.

The addition of Mr. Knight’s surging organ added warmth to the band’s sound and differentiated Mountain from Cream’s power-trio format. The album’s lead track, “Mississippi Queen,” had what became one of the most famous cowbell intros in rock, though it was originally used by Mr. Pappalardi simply as a way to count the band into the song. The song reached No. 21 on the Billboard singles chart and became an FM radio staple.

The final studio album by the original Mountain, “Flowers of Evil,” was released in late 1971. One side had material, recorded in the studio, fashioned around an anti-drug theme; the other side had music recorded live at the Fillmore East.

The next year the group split, a result of various band members’ drug abuse and Mr. Pappalardi’s decision to quit touring. While he continued to work as a producer, Mr. West, Mr. Bruce and Mr. Laing recorded two studio albums and a live set before Mr. Bruce bowed out in 1973. That same year, Mr. West and Mr. Pappalardi reformed Mountain with a new drummer and keyboardist for a double live album, “Twin Peaks,” and a studio album, “Avalanche,” both issued in 1974. But months later, the group imploded.

In 1983, Mr. Pappalardi was fatally shot by his wife, Gail Collins, who had co-written songs for Mountain and designed their famous album covers.

Mr. West continued to record and perform, billed either under his own name or as leader of Mountain, sometimes with Mr. Laing. He collaborated on albums with star guitarists like Joe Bonamassa and Peter Frampton and recorded with top metal singers like Ian Gillan of Deep Purple and Ozzy Osbourne.

His last album with Mountain, “Masters of War,” released in 2007, featured covers of Bob Dylan songs. In 2009, he toured with a band billed as West, Bruce Jr. and Laing, with Mr. Bruce’s son, Malcolm, on bass. (Jack Bruce died in 2014.) He appeared with Mountain at an all-star concert for the 40th anniversary of Woodstock in 2009. His most recent solo release, “Soundcheck,” reached No. 2 on Billboard’s blues chart in 2015.

Mr. West is survived by his brother and his wife, Jenni Maurer, whom he married onstage after his Woodstock performance in 2009.

Throughout his career, Mr. West remained committed to his uniquely punchy guitar style.

“I’m not a great guitarist, technically,” he told Guitar World in 1987. “But you know why people remember me? If you take a hundred players and put them in a room, 98 or 99 of ’em are gonna sound the same.

“The one who plays different,” he said, “that’s the one you’re going to remember.”