The Tony Award-winning actress will step into the role of the musical’s narrator, now known as Missus Hermes.

“I can’t do anything today!” Lillias White said as she emerged, somewhat flustered, from the elevator outside the Tricorne costume shop on the sixth floor of a Midtown Manhattan office building on a recent Tuesday morning. Her face was hidden behind white sunglasses and a navy and green star-patterned mask.

“All you have to do is stand,” Michael Krass, the costume designer for the Broadway musical “Hadestown,” reassured her.

White, 71, was here for her second costume fitting as the next narrator of “Hadestown,” a role she will perform eight times per week beginning on Tuesday. A veteran stage actress who won a Tony Award in 1997 for playing a middle-aged prostitute in the Cy Coleman musical “The Life,” she will become the first woman to play the Hermes character, now called Missus Hermes.

“I’m looking forward to doing what I do vocally,” she said. “And I’ll probably get some notes about reining it in, but” — she grinned — “I want to give the people what they came for.”

Krass and Katherine Marshall, the owner of Tricorne, ushered her down the hallway, past racks of costumes for the Broadway musical “Wicked” and the HBO series “The Gilded Age,” to a fitting room lined with a semicircle of mirrors.

The first order of business was the shoes: White, who is onstage nearly the entire two-and-a-half-hour show, had put in a specific request for her boot heels. They should be no higher than two inches, so her feet wouldn’t hurt.

Then it was time for the big reveal: The suit. Krass stepped out into the hall so she could change.

The original look for Hermes, who was conceived as a vagabond, was a brown rumpled suit and muddy boots, Krass said. But then in a fitting, André De Shields, who won a Tony Award in 2019 for originating the role on Broadway, asked: Why is it rumpled?

“But for Lillias,” Krass said, throwing his arms wide, “she has a big love and joy that fills the room. She needs something expansive to match that.”

White had changed into a silver pantsuit made from the same English wool as De Shields’s costume, topped by a collared, 1950s-style swing coat — shorter in the front and longer in the back — whose sweeping folds cascaded over gray trousers and low-heeled black boots that would later be painted silver. 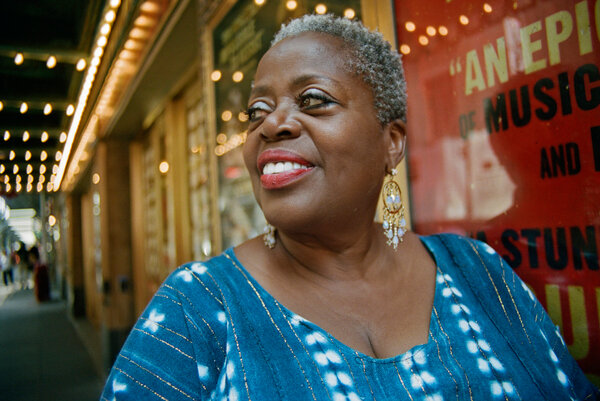 And she had a surprise in store: After scrutinizing the V-neck of the jacket, which closed with a single button, she threw it open to reveal a gleaming black-and-silver vest.

“I feel pretty,” she sang, grinning at her reflection.

Then her face turned serious.

“It’s a graveyard,” she sang — a line from the show’s opening number, “Road to Hell,” — raising her legs and stomping her feet as she looked in the mirrors on either side. She mimed shoveling. Crouched. Straightened up. Beamed. She and Krass agreed: The suit fit well.