Lorraine Kelly couldn’t believe her ears when she heard how much Prince Harry is reportedly earning for his tell-all memoir, dubbing the furore surrounding the explosive book ‘sad’.

In the new year, the Duke of Sussex is set to release his autobiography Spare, which is described as boasting ‘raw, unflinching honesty’ about the royal’s life story.

It’s believed the title is in reference to Harry’s position in the line of succession, while it’s been claimed that Penguin Random House has offered £35million for the book, with £17.5m being paid in advance.

On Monday’s Halloween episode of Lorraine, the host was joined in the ITV studio by royal editor Russell Myers, as they discussed the latest controversies surrounding the headline-grabbing memoir.

After Lorraine expressed her surprise over the reports that Harry’s ex-girlfriends declined being involved in the book, she admitted how ‘sad’ she finds the whole situation. 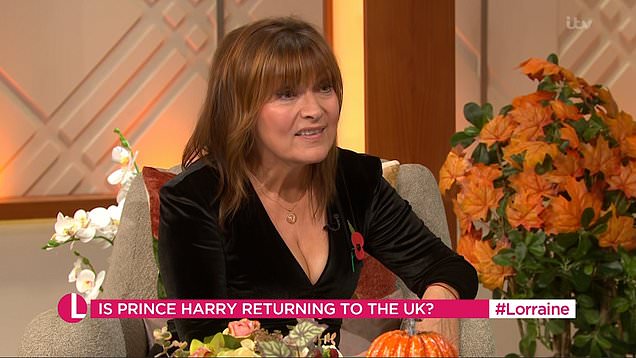 The royal editor alleged that Harry received a massive £20m for a down payment, while it’s understood the duke has penned a deal for three books/

‘I mean after the first one, I can’t imagine that there’ll be much to say. But we’ll wait and see,’ he added, as an astonished Lorraine went: ‘Geez!’

Despite her shock over the paycheck in Harry’s pocket, the TV presenter added that they had to give him ‘kudos’ for donating some of the fee to charity, including an organisation in Botswana ‘that’s close to his heart’.

‘It’s brilliant that he’s doing that, but at the same time, for that sort of money, they aren’t going to want some sort of psycho babble,’ she said, speculating over the contents of the memoir.

Russell agreed, conjecturing that Penguin Random House are likely going to want their money’s worth after dishing out millions for the behind-the-scenes book.

On Friday’s programme, she and Russell also spoke about the upcoming fifth season of The Crown, with Lorraine saying her ‘toes curled’ over the confirmed depiction of then-Prince Charles and Camilla’s ‘tampon-gate’ in the dramatised Netflix show.

While emphasising that The Crown is ‘not a documentary’, she added that ‘we’re all going to be watching it’.

Lorraine airs weekdays from 9am on ITV.