As far as theater is concerned, the pandemic has been a paradox, shrinking life down to lockdown bubbles and simultaneously expanding horizons. When you can stream plays from Europe as easily as from Brooklyn, the world seems more interconnected than in the past — tied together by bonds of humanity.

But also by bonds of inhumanity, as two recent plays from London demonstrate. “Typical,” by Ryan Calais Cameron, is based on the case of Christopher Alder, a British-Nigerian man who died while in police custody in 1998. Its blunt force underlines the universality of racist violence. “Hymn,” by Lolita Chakrabarti, is a subtler, searching look at the tragedies that befall Black men who see racism as the least of their problems.

Both are gripping, though the grip differs. “Typical,” from the Soho Theater, begins with the ring of an alarm clock and pretty much keeps ringing for 60 minutes. Not that you understand, at first, the nature of its warning. When we meet him, Alder — given no name in the play but vibrantly embodied by the British actor, TV host and rapper Richard Blackwood — is in a jolly mood, dressing and psyching up for an evening of dancing and drink.

In the manner of many one-man plays, “Typical” is a continuous interior monologue; the Alder character narrates his day as if keeping a minute-by-minute journal in lightly rhymed, high-spirited verse. “Skip over the skipping rope,” he says, deciding not to exercise. “Stand up on the sit up mat/Step over these weights that wait in hope.”

The relentless ticktock of the rhythm does double duty: maintaining dramatic tension while dramatizing the character’s suppression of it. Hints of trouble with his ex-wife, his sons, his finances and the world can’t compete with the beat of his interior music. 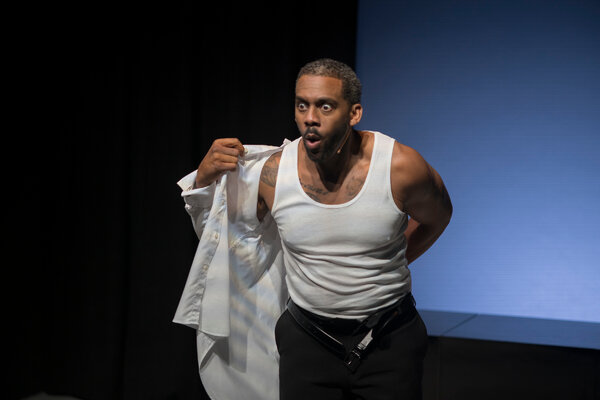 All this is invention; probably no one knows what the real Alder, who was 37 and a veteran of the Falklands War, was doing in the hours before he went out that night. But the shape of what follows is accurate. After an altercation outside a club, Alder winds up in custody, unresponsive on the floor of a police station with a pool of blood forming at his mouth. The white officers do not attempt resuscitation until it’s too late; instead, as a tape recording later proved, they laugh and make monkey sounds as he dies.

In England, none of this would be a spoiler; the case is as infamous there as the case of George Floyd is here. Cameron’s purpose is not simply to retell it but, as the title suggests, to turn Alder into an Everyman whose fate could be that of any Black person in Britain on any average day. The tragedy is systemic, as the story’s real-life conclusion demonstrates: The officers were acquitted of manslaughter charges.

The stark staging by Anastasia Osei-Kuffour emphasizes the universality of the problem by keeping the visual details minimal. Expressionistic light and sound take up the slack and give the play the fearful interiority and propulsion of a nightmare. That makes sense; Cameron wrote the first draft in a single jag from 9 one night to 10 the next morning, after being “harassed and bullied” by the police for the umpteenth time. On his mind, he has said, was this despairing question: “Is there any way I can graduate into just being a man?”

The same question bedevils Gus and Benny, the fictional characters brought to life in Chakrabarti’s “Hymn.” Though both are of Jamaican descent, the similarity appears to end there. Gus (the West End star Adrian Lester) is from a solidly middle-class background but, approaching 50, has entrepreneurial dreams far beyond his family’s dry cleaning and stationery stores.

Also approaching 50, Benny (Danny Sapani, from “Killing Eve”) has had a harder climb. After a childhood spent shuttling between foster care and his unstable single mother, he has only recently begun to achieve for his three children the stability he grew up lacking himself.

But even that stability is shaky, built in part on the void where his unknown father should be. That, and the fact that he and Gus meet at the funeral of Gus’s stern and disapproving father, quickly tip off where the story is going. The two men turn out to be half brothers, only half complete, with or without one another.

At first defensive and prickly, Gus and Benny gradually, over the course of a year, bond through sport, entrepreneurship and especially music. Popping ancient moves to songs from their youth — “Lean on Me,” “Gettin’ Jiggy Wit It” and many others — they nearly come to feel like family. Nevertheless, the theme of failure and absence runs underneath even the most joyful passages, a countermelody that insinuates the disaster to come.

Chakrabarti does not specifically tie that theme — or that disaster — to racism. When a white woman rolls up her car window because she is afraid Gus will attack her, or when Benny gets tossed out of a pub for doubtful cause, they make little of it. Microaggressions are just part of the itchy fabric of their everyday life: petty annoyances like bad weather or a bunion.

But Blanche McIntyre’s beautifully acted production for the Almeida Theater lingers just long enough on such moments to make you wonder, as the story moves toward its inevitable, symmetrical conclusion, how much of what happens to Gus and Benny is ever in their control. Racism is part of that story; parenting is another. Gus lived with his father and Benny didn’t, but both were harmed by him.

The pun built into the title gets that doubleness just right: “Hymn” is a songful celebration yet also an accusation. That makes it, like “Typical,” an important addition to the literature of plays inspired by the Black Lives Matter movement. In different ways they demonstrate what it means to matter, giving us Alder and men like him as they were before they were blotted out, with all their foibles, passions and promise.

Is the focus on what’s lost an especially English point of view? If so, I’m grateful that streaming has brought it here. American plays on similar subjects — Cameron says he wrote “Typical” in part as a response to Antoinette Nwandu’s “Pass Over” — mostly deal with the machine of racism itself, how it’s oiled and how it crushes. “Typical” and “Hymn” show us something different, complementary and needed: that Black men are complicated in ways a political analysis can’t always catch. They are much more than just their deaths.