For going on five years now, the record producer Mark Ronson says he has been known by no small number of casual music fans, if they can identify him at all, as “the white guy from the Bruno Mars video.”

The fact that “Uptown Funk,” one of the most successful and recognizable pop smashes of this century — with 3.5 billion views on YouTube, 14 weeks at No. 1 and a Grammy for record of the year — actually appeared under Ronson’s name on his 2015 album, “Uptown Special,” is but a trivia footnote. And he’s fine with that.

Because for most of his career, Ronson — the princely heir to a New York-via-London society-page family turned downtown D.J. turned super-producer — was the type to feel most comfortable in the studio and in the liner notes for modern giants like Amy Winehouse, Adele, Lady Gaga and Mars. (His parents are Laurence Ronson, a real estate entrepreneur, and Ann Dexter-Jones, the socialite who went on to marry Mick Jones of Foreigner.)

But the problem with succeeding so consistently — and with being leading-man handsome, with a head of hair that actual leading men might pay thousands for in Beverly Hills — is that eventually people start to get curious about you, especially amid the rise of D.J.s and producers as pop stars, including Diplo, Calvin Harris and the Chainsmokers.

“I’m definitely not a pop star,” Ronson, 43, cautioned one recent morning in the kitchen of an apartment he’s renting in TriBeCa. “I’ve worked with a lot of people that a lot of people love.”

Yet that distinction feels increasingly irrelevant. In the last few months alone, Ronson has performed alongside Miley Cyrus on “Saturday Night Live”; won two Grammys (including one for “Electricity,” the hit featuring Dua Lipa for Silk City, his duo with Diplo); and taken home a Golden Globe and an Oscar alongside Lady Gaga for “Shallow,” the defining power ballad from the blockbuster “A Star Is Born.”

“I couldn’t have made that plan happen if I wanted to,” Ronson said, acknowledging his ascent into a new sphere. “It’s like, ‘Oh, we know who that guy is now …” 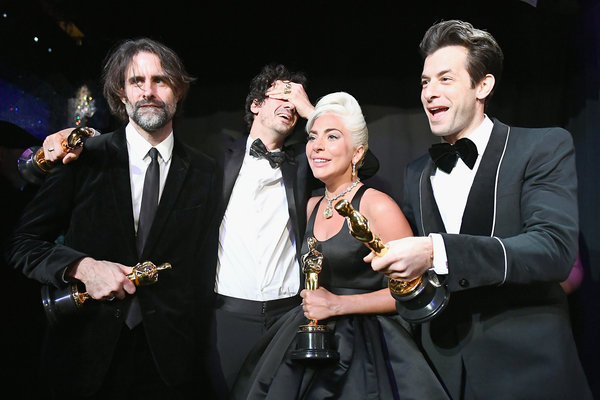 Fortunately, he’s been preparing to cash in on that cachet. On June 21, Ronson will release a new album, “Late Night Feelings,” swerving pointedly away from, as he puts it, the “quote-unquote fun groove, good-time party music” that he’s typically associated with, in favor of “sad bangers” featuring only female vocalists. Gurgling up from the dissolution of his five-year marriage to the model and actress Joséphine de La Baume, the new songs have elements of Ronson-esque funk, soul and R&B, but tend to be more mid-tempo and less karaoke-baiting, with titles like “Pieces of Us,” “Don’t Leave Me Lonely,” “When U Went Away” and “True Blue.”

And although the album features Cyrus (on the disco-country lead single “Nothing Breaks Like a Heart”), alongside tracks led by Alicia Keys and Camila Cabello, it’s not an A-list onslaught — no Gaga, no Mars — with its emotional and thematic core handled by a fleet of up-and-coming and left-field singers and songwriters like Ilsey Juber, Yebba, Lykke Li, King Princess and Angel Olsen.

For those reasons, “Late Night Feelings” is unlikely to become “Uptown Special” part two, which for Ronson, is the point. “I think that album had one monster hit and some really good songs and was a little scattershot,” he said in his distinct, endearingly marble-mouthed trans-Atlantic accent, adding that those tracks often felt like they belonged as much, if not more, to his collaborators. (“Uptown Funk,” he admitted, was “75 percent Bruno.”)

Ronson also recalled getting a bit lazy after past breakthroughs, trying to recreate his work on Winehouse’s Grammy-collecting “Back to Black” in the years that followed, and doing something similar with “Uptown Funk” on the soundtrack to the “Ghostbusters” reboot in 2016.

“Nothing’s ever going to be as big as ‘Uptown Funk,’ so the point is to never chase that,” Ronson said. “Now, making a whole album — something people want to get lost in — is the most important thing I can do.”

Still, he’s been left to grapple with raised commercial expectations from the industry side, while at the same time knowing there’s not much left to prove when you’ve already won an Oscar and made an 11-times platinum wedding party standard.

Out since November, “Nothing Breaks Like a Heart” has failed to break the Top 40 in the United States, and the album’s title track, featuring Lykke Li, did not crack the Hot 100 at all. Ronson seemed sanguine about his chart performance, and noted that he’s always been bigger in his native United Kingdom anyway.

“A mega-smash is going to get me a decent check, probably get licensed to hell, maybe you move one name up on a festival list,” he said. “But an entire great album gives you a place in people’s hearts.” He called “Late Night Feelings” “something I actually want to listen to,” and earnestly described reading — and agreeing with — a tweet from a British journalist, who expressed surprise at his own excitement for a new Ronson album.

“It’s appropriate,” Ronson said. “This is the first time, probably, people should be excited to hear the entire album, as opposed to like: ‘I can’t wait to hear that song at a party.’”

He didn’t exactly set out to make his divorce album. In 2017, while working frequently with Diplo or Kevin Parker of Tame Impala, Ronson, who was “a mess personally,” felt unfocused, uninterested and a bit lost when it came to his own music, he said. Without a conceptual North Star, “It’s just a weird compilation record with me producing and a bunch of different people singing. Why wouldn’t I just give those songs to different people?” he wondered.

But Ronson — who is smooth on the outside, and more jagged underneath, his anxieties and neuroses seeming to poke out from odd angles — was increasingly drawn to relative darkness, instead of retro-funk brass sections and dance-floor explosions. “Every time we wrote something a little sad and melancholy, that would be the only thing that really resonated with me,” he said.

Yet because he is not an artist in the typical sense, Ronson felt insecure about excavating the same emotional depths as his longtime collaborators, who have always gotten their best mileage from sorrow. “I’m not entitled to it,” he thought. “I’m supposed to be the fun party guy.”

Luckily, his post-breakup malaise was universal, and Ronson’s collaborators of choice could relate and push him forward. Last spring, across more than a week at Rick Rubin’s Shangri-La studios in Malibu, Ronson led sessions with songwriters from overlapping creative and social circles like Romy Croft of the xx; Ilsey Juber, a frequent Diplo and Lykke Li collaborator who also co-wrote hits for Panic! at the Disco and Beyoncé; King Princess, who had recently signed to Ronson’s label, Zelig Recordings; and Yebba, a soul and gospel singer from Arkansas who has thus far remained an industry secret.

“There’s no better way to channel pain than through women,” said Lykke Li, 33, who recalled crying at the intimate studio gatherings. Ronson “surrounds himself with women, so I don’t think it was on purpose, but it was very natural,” she added. “We’re his women and we know about the pain and about the love.”

Lykke Li praised the producer as a daddy figure — but not a controlling one. “He’s a great curator who finds people and lets them do what they do,” she said.

The 24-year-old singer went on to contribute a suite of songs that became the album’s center, including the smoldering, tears-on-the-dance-floor “Don’t Leave Me Lonely,” which Ronson said he hoped would have a chance to become a huge hit after the tracks with more recognizable names get their shine.

He’s also working on Yebba’s forthcoming solo debut, and on a recent spring night, Ronson gathered a top-tier band — including Questlove of the Roots, the bassist Pino Palladino and other session players from D’Angelo’s storied “Voodoo” era — at Electric Lady Studios, the collective’s old stomping ground, to work on her songs. As everyone got comfortable, the musicians played one another unreleased tracks and traded stories about past sessions with J Dilla and Q-Tip.

But when Yebba signaled that she was ready to sing, the mood shifted and Ronson grew more serious and withdrew from socializing, opting instead to tweak snare sounds and reverb levels. At one point, unhappy with the live takes and looking antsy in the control room, Ronson grabbed headphones and a pad of paper and sat with the band. But mostly, he homed in on the room’s rookie, analyzing her face for any hints of reaction in a studio full of musical giants. “What’s up? Tell me,” he offered after one take that left Yebba looking anguished.

A few weeks later, in his kitchen, Ronson said that he still felt an overwhelming urge to discover and put on budding artists, despite having earned the ability to open just about any celebrity door in the music business. He noted that singers like Winehouse and Lily Allen were still underground when he enlisted them for his second album, “Version,” a collection of covers.

“I don’t know how to do anything other than make what feels good at the time and gives you a tingling feeling,” he said. “That’s still going to be my M.O.: Are you excited in the room? Is the person next to you excited? Do you want to listen to it seven times in a row before you go to bed when you get home?”

What has shifted are his priorities outside the studio. Ronson spoke with pride about his handling of the “Shallow” supernova and Oscar campaign, almost marveling at his own maturity. “I would’ve used to have partied until 7 in the morning and been down for the count until halfway through Tuesday, and it’s just a different time,” he said. “Winning an Oscar is insane, but it doesn’t change whether the next song’s going to be any good.”

Since his divorce, he’s been investing in sessions with a cognitive behavioral therapist — typically on FaceTime, because the guy lives in Miami — despite going most of his life without a shrink. “I never really thought I was that messed up, because I don’t really scream head case,” he said, “and I’m used to working with people that are probably truly more [expletive] up or complicated.”

But Ronson has seen the benefits as he’s leaned into his 40s and considered a move back to New York after more than a decade in Los Angeles and London. Though he initially assumed he’d find a place downtown, Ronson recently shifted his search to the Upper West Side, where he lived as a child.

“I love the Odeon, but there’s ghosts there — I don’t need to go five nights a week at 11 for late-night food,” he said. “It might be different if I had two kids and a family, but because I’m still walking alone in these streets, it’s like, what’s changed?”

At the same time, despite not yet settling down again in matrimonial bliss, Ronson sees the advantages of his own ennui. “It is really good, unfortunately, for music,” he said.

Even with “Late Night Feelings” out of his system, Ronson described recently finding himself at a piano, writing with a sense of melancholy that “breeds more interesting chords and harmony and movement.”

“The heartbreak kid rides again,” he thought to himself. 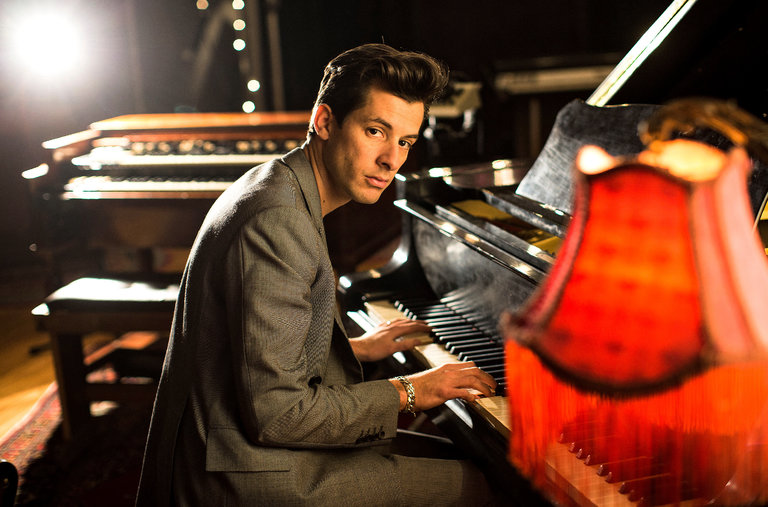 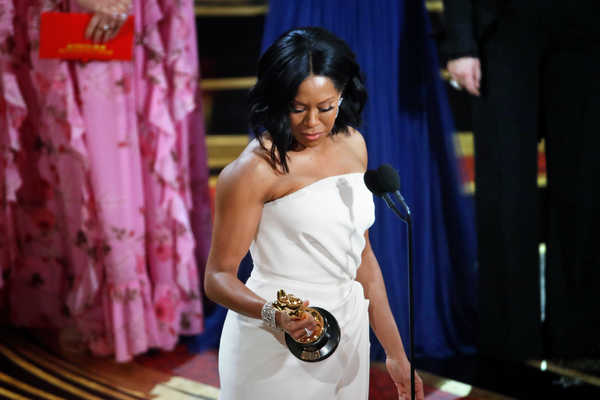 Joe Coscarelli is a culture reporter with a focus on pop music. His work seeks to pull back the curtain on how hit songs and emerging artists are discovered, made and marketed. He previously worked at New York magazine and The Village Voice. @joecoscarelli