She’s been to 39 shows since the 2016 election, and believes Broadway will return. But she doesn’t have the “gumption” to see herself depicted just yet. 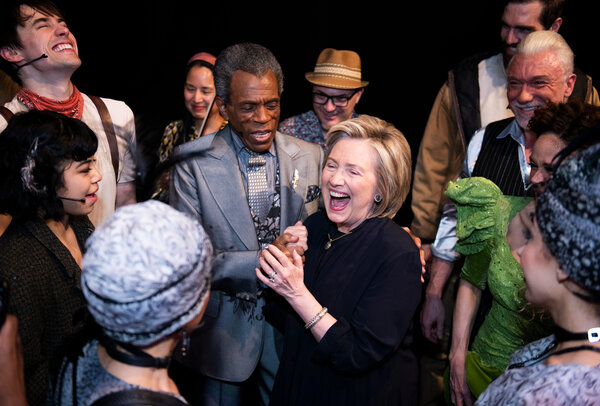 Hillary Clinton has long loved theater — back in the day, she wore out a “Camelot” cast album and got standing room tickets to the original production of “Hair.”

In the years since the 2016 presidential election, she has become Broadway’s best-known fan, showing up regularly to see big musicals (she liked “Ain’t Too Proud” so much she returned with her husband) and small plays (she raves about “What the Constitution Means to Me”). Between 2016 and the 2020 theater shutdown, she saw 39 shows in New York.

The theater world, of course, is now in crisis. Because of the pandemic, it remains unclear when Broadway and other professional stages can reopen.

Mrs. Clinton talked with me about her relationship to theater, and about the challenges facing the art form we both love, in an interview for Offstage, a New York Times digital series. These are edited excerpts from our conversation, which included questions relayed from readers.

We’re speaking in the middle of a pandemic. There’s a presidential campaign. Wildfires in the West. Is it OK to be talking about art?

It’s more than OK. I think it’s necessary. Art is not a luxury. It is a necessity, to feed the human spirit and mind, but also to undergird culture and the questions we ask ourselves. In a way, we need theater more now than ever, because we need to be reminded that we are all a part of a bigger story. And for me, the bigger story right now is how we see ourselves, how we treat each other, how we care for each other, how we govern ourselves. We need art to help guide us because there are very conflicting points of view right now.

I understand you were in a few shows during high school.

Well, yes, but only if I didn’t sing. That was so humiliating. My high school was staging “Bye Bye Birdie.” I knew the drama teacher. And he goes, “Well, I’ll tell you what Hillary, you can be in the production, as long as you don’t actually sing.” I really did, and still have, just a pretty sad voice for singing.

After 2016, we started to see you a lot in the audience on Broadway. Is it an escape? Is it therapy? What’s the rationale?

I really needed to get replenished. I felt so drained and hollowed out by the 2016 election. Everything that happened, it seemed almost a very bad play. Cue the Russians. Cue Comey. Cue WikiLeaks. It just never seemed to end. And so I did seek solace, as well as replenishment, by going to the theater quite often.

And did you find it?

I did. I did. Now, I will tell you that the first couple of times that I went, it was very challenging, and even a little painful, because there were so many people who came up to see me who wanted to share their feelings about the election. It became not only what was happening on the stage, but what was happening in my interactions with people at the theater. 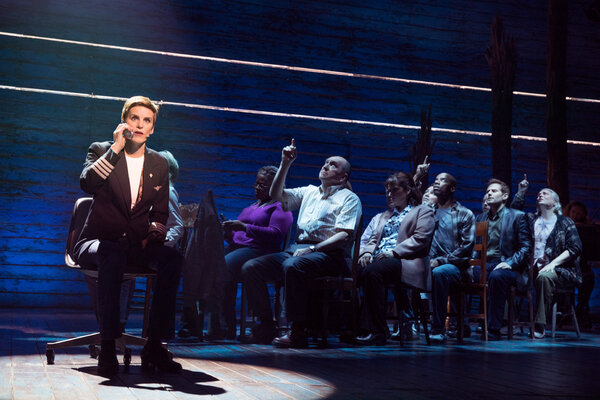 How do you choose what to see?

I want to see the big productions because that’s always a kind of a lift. But I also want to see a broader range of theater — Off Broadway as well.

When I saw “Three Tall Women,” I was just blown away. I was stunned by how powerful that was. When I saw “The Ferryman,” I could not get out of my seat, because I’d been involved with the peace process in Northern Ireland, and just the rawness of that story. When I saw “The Band’s Visit,” I was really touched by the story, having been to Israel and Jordan and the Middle East so many times. And when I saw “Come From Away,” having been senator on 9/11, it was just a touching and very joyful remembrance of such a horrible experience.

One thing we know about theatergoing is that for many people it’s learned from their parents. Did you try to introduce Chelsea to theatergoing?

Absolutely. She, like me, loved musical scores, and we listened to a lot of that growing up. She loves the theater, and goes regularly. And then for my granddaughter’s fifth birthday, her mom and I took her to see “Frozen.” She was just wide-eyed.

We have some questions from people who have signed up to watch. Brittany wants to know of the shows you’ve seen, do you have a favorite?

Some of the plays that I just mentioned are favorites because of the way that I connected with them. And some performances, like “Hadestown” — I loved André De Shields, who won the Tony Award. And there are some that I would see again because I found them provocative, thrilling, entertaining — all of the things that I look for when I go to the theater.

How do you decide whom to bring with you?

And as you know, I have a wonderful theater critic close to me — Rob Russo, who is one of my longest-serving colleagues. We saw “Fiddler on the Roof” in Yiddish, which was amazing. Several of my friends had said, “You need to see this.” And I thought, “I don’t understand Yiddish.” They said, “Believe me, you’re going to be blown away by it.”

One of the shows we haven’t talked about yet is “Hamilton,” which I think you saw Off Broadway, and on Broadway, and then in Puerto Rico.

I think I’ve seen it, I don’t know, three additional times on Broadway. And then Bill and I were in Puerto Rico after the terrible damage of the hurricanes. The Clinton Foundation and the Clinton Global Initiative were working with Puerto Ricans to re-establish services. And so we coordinated our visit to go when “Hamilton” was still being performed in San Juan. It was electric.

A few dramatists have started writing about you. Last year a play called “Hillary and Clinton” imagined your 2008 campaign in an alternate universe, and then there was a musical called “Soft Power” that featured a character named Hillary Rodham Clinton who dances and sings and eats a lot of ice cream.

(Laughing) Well in my house, the dancing, singing and eating ice cream does go on. [But] I have not had the courage to go see anything about me. Sometimes in a pre-existing production, somebody will have a reference to me, and I obviously catch that. But to go and see a play about me — I haven’t gotten the gumption up to do that yet.

You saw “The Inheritance,” a play about generations of gay men in New York. There are scenes around the 2016 election — a brunch where they’re talking about the expectation that you’ll win, and then they’re watching the results and not happy with how it’s going. I wonder what it was like to sit through that.

It was painful, because we all know now what we’ve had to live through over the last nearly four years and the pain and real suffering that so many Americans have felt was potent. To see the end of that first long act of “The Inheritance” be sort of circled around my loss was incredibly touching. And as I say, painful to me.

As you know, this is a really difficult time for artists financially. Do you think the government has a role to play?

Yes, absolutely. I don’t understand why a second large recovery package hasn’t already passed the Congress. They certainly have time to rush through an ill-advised Supreme Court nomination, and they don’t have time to take up the act that was passed in the House called the Heroes Act.

The issue of racial justice is reverberating in the theater world. I wonder if you have advice for theater industry leaders who are grappling with concerns about equity?

Well, first I’m glad they’re grappling, because the moral reckoning [is] long overdue — everyone would, I think, admit that. There are lots of good ideas that are being put forth now about how to make the theater more diverse, and not only the actors and the stage hands and everyone who puts on the production, but the audience. And then of course, when it comes to reaching out to playwrights and actors and script writers and score writers — whoever is part of a production — cast a wider net, be more adventurous, be more provocative, see what’s out there. And the final thing I would say is, every one of us has to ask ourselves, are we free of implicit bias?

What do you think will make you feel comfortable going back into a theater?

I’m going to be cautious. I’d have to be sure that what was being produced and presented had taken every precaution. And I think that’s gonna take a while.

Allegra asked a question I wish I had thought of which is, would you ever be a Broadway producer yourself?

Well you never know, Allegra. I’m certainly open to it. I’ve got a podcast; I’m interested in producing good content. I think it matters what stories are told and who the stories are about. And I want to be part of that in some way. So stay tuned.