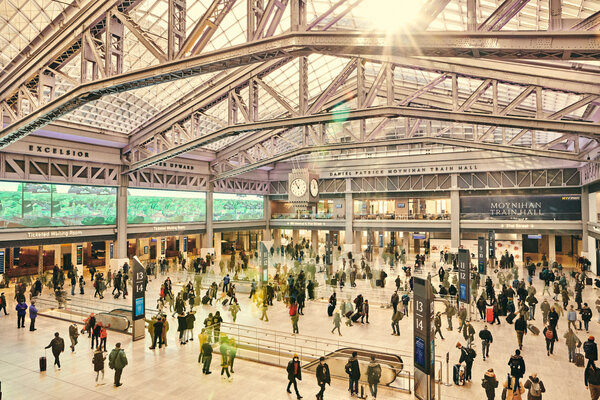 The $1.6 billion Moynihan Train Hall opened at dawn on New Year’s morning — on budget, too, even a couple of months early. Instagram swooned. Tweeters channeled Stefon from “Saturday Night Live.”

In the midst of everything else, we needed this. New York needs this.

No, the huge, lofty train hall, with its soaring skylights, doesn’t magically resurrect the old Pennsylvania Station or extinguish the raging dumpster fire that is the current one. It leaves all sorts of herculean challenges and tasks around Penn Station unresolved. But it delivers on its promise, giving the city the uplifting gateway it deserves. When was the last time you could say something like that about a public works project?

We’ll get to what Moynihan doesn’t do. First: It converts what used to be a mail-sorting hall inside the James A. Farley Building, formerly the General Post Office, across Eighth Avenue from Penn Station. If you can’t picture it, Farley is that Beaux-Arts behemoth with the imperial staircase and Corinthian columns, occupying the entirety of the superblock between Eighth and Ninth Avenues and 31st and 33rd Streets.

The building was built during the early 1910s as an architectural bookend to McKim, Mead & White’s gloried station. This was a time when post offices and train stations were conceived to be palaces for the people — and when mail was transported by rail. Farley (this is a crucial point) sits over the end of several tracks that serve Penn.

The slightly Rube Goldbergian idea of repurposing it as a train hall was first floated nearly 30 years ago by Daniel Patrick Moynihan, the United States Senator from New York and the most architecturally engaged and sophisticated public official since Thomas Jefferson. He understood the historic station was a kind of civic barometer. An era had come tumbling down along with the soot-stained travertine walls and Doric columns when wrecking crews razed the original site in 1963. By the ’60s, Gilded Age optimism and New York’s leaping ambition at the start of the century had succumbed to a mean, cramped vision of the city and its prospects, which the new subterranean Penn Station exactly embodied.

Senator Moynihan wondered whether Farley’s mail-sorting facility, with its access to railway platforms under Eighth Avenue, was a potential restorative for lost glory that kept things, architecturally speaking, in the family. This being a big, complicated infrastructural proposal, years passed and various attempts to make something happen foundered. Finally in 2016, Gov. Andrew M. Cuomo got it done: He promised the train hall would be built and showed renderings by the architecture firm Skidmore, Owings & Merrill, which had been working on various conversion schemes since the ’90s.

You may have glimpsed Farley’s mail sorting room in “Miracle on 34th Street.” It was a prosaic, not obviously promising thrum and mess of machinery and columns. A skylight had been covered over during World War II. A dropped ceiling hid steel trusses from which security guards kept their eyes on postal employees.

The transformation now is stunning. Full credit to the governor for bringing all the key players together. Michael Evans deserves a special shout out. He was president of the Moynihan Station Development Corporation and died, at the age of 40, in March. Mr. Evans, the team at Skidmore, Owings & Merrill and the engineering firm Schlaich Bergermann have gifted the city with a new light-filled steel, glass and Tennessee marble cathedral, nearly the size of Grand Central Terminal’s main hall.

Those trusses, exposed and painted gray as is much of the hall, support catenary skylights, like inverted nets or inflated glass balloons, aerial feats of sculptural engineering and parametric design. Norman Foster’s Great Court at the British Museum comes to mind (Moynihan’s grid shells are actually finer), as do classic 19th century European railway sheds and of course the concourse from Charles McKim’s original Penn Station.

But Moynihan doesn’t pretend to exhume the concourse or compete with Grand Central. The marble recalls the stone quarried for Grand Central. Arched windows allude to the Baths of Caracalla, one of McKim’s inspirations. And as in McKim’s station, a clock dangles above the middle of the train hall, begging to be met under. The architect Peter Pennoyer won a competition to design it. He riffs on Farley’s industrial pedigree along with Ralph T. Walker and Ely Jacques Kahn to concoct a nostalgic, Art Deco confection. I like it.

That said, the architecture is modern, sober and solid. The layout is the opposite of the current Penn Station — clear, intuitive, axial, with loads of electronic signage and wayfinding kiosks. We’ll see how it functions once retail settles in. The original station, let’s remember, was built by and belonged to a private, for-profit company. Moynihan, like so many public projects today, depends on retail and commercial development. Facebook recently leased 730,000 square feet in the west end of Farley. Skeptics had expressed fears that the new train hall would be just another publicly subsidized shopping mall masquerading as a railway station like the $4 billion Oculus at the World Trade Center. (I can’t think of a recent project that did more to squander public faith or sour New Yorkers on the value of architecture.)

I was worried, myself.

But Moynihan isn’t a shopping mall, at least it doesn’t look that way to me. The main hall seems clearly organized around passenger services and amenities. The Rockwell Group designed for it an attractive 320-seat waiting room with snaking walnut banquettes. I suspect there will be a call for even more seating, post-pandemic. The concourse is a place where people might just want to hang out. Public bathrooms are exceptionally nice. The Public Art Fund has contributed first-rate art installations by Kehinde Wiley, Elmgreen & Dragset and Stan Douglas. A midblock corridor, where mail trucks used to disgorge cargo, now leads to Amtrak’s almost comically handsome Acela lounge on a mezzanine overlooking the train hall, by FXCollaborative.

As for circulation and access, an escalator and corridor tie the train hall to Ninth Avenue along what would be West 32nd Street. The metamorphosis of the neighborhood to the west of Moynihan into Singapore on the Hudson, with its rash of new office and high-priced apartment towers, including the architectural petting zoo called Hudson Yards, provided a demographic rationale for the train hall.

West Side development, even looking ahead several decades, is in fact not likely to account for more than a fraction of Penn’s ridership. Like a luxury box in a stadium, Moynihan was built essentially to benefit a privileged few.

What Penn still needs are more tracks and platforms and new tunnels under the Hudson River — a project called Gateway, which, fingers crossed, might at last get funded with an Amtrak fanboy in the White House. The economy of the Eastern Seaboard depends on it, and on increasing Penn Station’s capacity. Before the pandemic, some 650,000 people a day used the station, triple the number it was built to handle. As many as one million or more may want to use it in the coming years, especially assuming Penn Station Access brings all of the city’s major commuter railways, including Metro-North, into the station. This requires that a whole new facility, Penn South, be built south of the existing one, between Seventh and Eighth Avenues, to link with Gateway’s tunnels and create new tracks to serve New Jersey Transit riders, whose misery Moynihan does next to nothing to relieve.

This is because Farley squats over the westernmost ends of tracks used by Amtrak and Long Island Railroad but over tracks that only partly serve New Jersey Transit. Moynihan is a spectacular train hall for Amtrak, providing additional access to Long Island Railroad platforms.

But Amtrak accounts for some 30,000 passengers a day. Five percent of Penn Station’s (pre-Covid-19) ridership.

I still believe the hall is a useful step. Symbols matter, after all, as the original Penn Station proves. The millions of commuters who suffer the present station know that its problems aren’t just aesthetic. They involve public health, public safety, environmental justice and the city’s economy, which in no small measure will only recover if commuters in places like Floral Park, Hempstead and Trenton want to return to offices in Hudson Yards, Midtown and Brooklyn after the pandemic. Moynihan provides a welcoming new front door and doubles down on the future of train travel. It sends a message. And we shouldn’t underestimate the hunger and political momentum it can generate for further improvements.

Momentum is our collective challenge. We have become a city of naysayers and obstructionists. But historically, New York has battled back after recessions and calamities by dreaming big. The success of Moynihan must accelerate a campaign that includes Penn South, a renovated Penn Station, Gateway — all of it part of a neighborhood plan that rationalizes forthcoming development, adds bike access and prioritizes public spaces, street life and pedestrians. Governor Cuomo has said he intends to follow through. On Sunday he proposed a $60 million plan for walking paths that would link Moynihan to an extension of the High Line and Hudson River Park.

Talk is talk, obviously. Moynihan is something else. It’s proof of concept. Last week representatives for Manhattan Community Board 5, which oversees the neighborhood, agreed to consider a proposal by PAU Studio, an architectural and urban design firm, that would move Madison Square Garden across Seventh Avenue, freeing Pennsylvania Station from its entombment.

An intriguing, less costly and far likelier idea just now making the rounds involves persuading (a presently recalcitrant) Amtrak to relinquish its mezzanine space in Penn, since it has Moynihan. Demolishing that mezzanine could make it possible to raise the low ceiling now squashing the rest of the station into a subbasement, giving millions some relief.

Getting Amtrak (much less Madison Square Garden) to go along with either plan is another matter. Penn Station has been notoriously impossible to fix because it is the perfect storm of siloed interests, private properties, entrenched bureaucracies and conflicting jurisdictions.

London may provide a useful example here. King’s Cross and St. Pancras are neighboring but separate railway stations in the city’s King’s Cross district. One station serves commuters and points north, the other European travelers as well. For generations, the area was poor, run-down and crime-ridden. Its problems seemed intractable. Then the stations were redone and the neighborhood redeveloped. The process was costly and took many years. But now the district is one of Europe’s great success stories, a thriving hub, critical to England’s economy and future.

Change can happen. Moynihan is a start.