Des, a three-part drama about serial killer Dennis Nilsen, has been praised by both critics and viewers following the airing of its final instalment.

Louisa Mellor from website Den of Geek said the “nuanced” ITV series had been both “considered” and “responsible”.

Des also drew praise on Twitter, where one user called it “quite outstanding”.

Yet comedian David Baddiel was not alone in remarking how much smoking there had been in this 1980s-set recreation of Nilsen’s arrest and trial.

Author Erica James agreed, saying she felt “as though I’ve passive smoked my way through a packet of cigarettes each night it’s been on”.

The show’s director Lewis Arnold admitted there was “a lot” of smoking in his drama, revealing that actor Daniel Mays had been given an unofficial award during filming for “most cigarettes smoked onscreen”.

Lots of people tweeting about the smoking. We are aware there is a lot. So much so we got @DanielMays9 an award… pic.twitter.com/IHqxkyXCjR

Mays, who plays the dogged Detective Chief Inspector who sought to bring Nilsen to justice, said the accolade now had “pride of place” on his mantelpiece.

Last year the subscription service Netflix announced plans to cut back on how often smoking is shown in its original shows.

Taking its title from Nilsen’s preferred nickname, Des depicts its subject’s 1983 arrest following the discovery of human remains at his north London home.

Nilsen was subsequently convicted of six counts of murder and two of attempted murder, though it is believed he killed at least 15 young men in all.

Des has been a ratings winner for ITV, becoming the broadcaster’s biggest drama launch of the year so far. 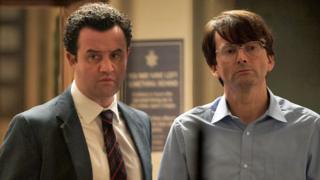 Monday’s episode was watched by an average audience of 5.4 million, which fell to 4.75million on Tuesday before rising to 5.22 million on Wednesday.

ITV is following the drama with a documentary about Nilsen, narrated by Tennant, that will be shown at 21:00 BST on Thursday.

Yet its thunder may have been stolen slightly by Channel 5, which rebroadcast its own documentary about the serial killer immediately after the first episode of Des aired on Monday night.

Both Mays and co-star Jason Watkins, who plays Nilsen’s biographer Brian Masters, have thanked audiences for their positive responses to the drama.

Mays said it was “beyond gratifying to see the show resonating”, while Watkins expressed his gratitude “for all your kind words and appreciation”.