Meghan Markle has had quite a few amazing women on her Archetypes podcast, like Serena Williams and Mindy Kaling, to name a few, since launching in Aug 2022. However, her most unexpected guest may be someone from her husband’s family. In an unexpected turn of events, it’s alleged that her sister-in-law Kate Middleton, Princess of Wales, may be a guest star on the Spotify podcast.

Per SheFinds, a royal insider said the Duchess of Sussex asked Kate to appear on her podcast while she and Prince Harry were in the UK for the Queen’s funeral. A whole episode would be dedicated to her, and apparently, she’s quite open to the idea. We know Meghan has had this idea for a while, but it truly seems like it’s going somewhere.

“While Meghan was over here, staying in Windsor at their cottage, she put out a request to the Princess of Wales, according to that good source, to appear on a forthcoming episode of Archetypes,” royal commentator Neil Sean said on his YouTube channel. “We’re not quite sure how this was relayed to the beautiful Princess of Wales, but according to Meghan, she felt they were progressing.”

Meghan and her Spotify production team have reportedly “yet to hear back” about it, but many believe that there’s a chance they could link up while Kate and Prince William are in Boston for the Earthshot Prize awards on Dec 2nd. However, more reports have come in claiming that Willian and Kate aren’t even thinking about visiting the two during their US trip, per the Sun.

Truly, only time will tell with this one.

Brothers and Wives: Inside the Private Lives of William, Kate, Harry, and Meghan by Christopher Andersen 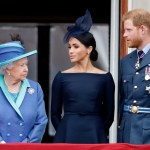 The fraught relationship between the Cambridges and the Sussexes has been heavily scrutinized for the past few years. But we’ve never had quite a clear look at the relationship between Prince Harry and Meghan Markle and Prince William and Kate Middleton, until now. Longtime royal writer Christopher Andersen takes fans into the intimate conversations and exchanges between these two powerful couples in Brothers & Wives: Inside the Private Lives of William, Kate, Harry, and Meghan, illustrating what was lost, gained, and what might be found as the next generation of the royal family embraces the future.

Brothers & Wives: Inside the Private Lives of William, Kate, Harry, and Meghan

Click here to see a complete timeline of Prince Harry and Meghan Markle’s feud with the royal family.