When I was in graduate school in Manhattan, my friend Bernard and I went to the opera without eating supper.

Bernard and I had met at a fancy food market in SoHo where we both had part-time jobs behind the bread station. I was going to be a famous writer and he a famous set designer. But in the meantime, we spent our bread wages on the cheapest Family Circle tickets at the Metropolitan Opera, then hummed the arias from “Eugene Onegin” and “La Bohème” while we sliced seven grains and stacked up the baguettes.

Our shift lasted past dinnertime, and the sandwiches and flutes of Champagne at the intermission bars were beyond our students’ budget. So we always came packing snacks — hearty, filling bites that could sustain us through “Götterdämmerung” but were small enough to stash inside my vintage beaded purse. 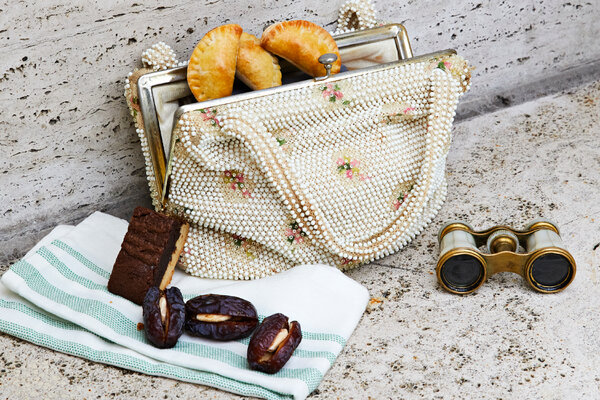 In nice weather, we munched egg salad sandwiches and homemade chocolate truffles perched at the edge of the fountain in Damrosch Park adjacent to Lincoln Center. When it was stormy, we would eat leaning against the rails of the balcony, watching fancy patrons savor their intermission baked alaskas at the Grand Tier restaurant below, assuming that one day in the distant future, that would be us.

That distant future has arrived, and I’m still toting intermission nibbles to the Met in the same vintage purse. I plan to continue this season as well (the Met reopens Monday). But these days, I’m accompanied by my husband, Daniel, whose essential contribution is a (possibly illicit) flask full of bourbon or pre-mixed Manhattans tucked into his pocket.

By now we could spring for sandwiches and Champagne at the bar, or even the Grand Tier, but we rarely do. My picnics, which are made to order — and, I think, a much more fun way to pass the 30 to 40 minutes of an average Met intermission — have become part of the opera ritual. And this year, picnicking offers another advantage: pulling your mask down to eat outside at Damrosch Park can be a Delta variant-savvy way to go.

Over the years of Falstaffs and Salomes, I’ve learned a few best practices when it comes to packing these petite opera tidbits.

The first and foremost is to minimize the mess by avoiding sloppy, saucy morsels. I like to think of opera snacks in the same way that I’d choose hors d’oeuvres for a party. Neat, self-contained finger foods that can be nibbled in one hand while you hold a drink in the other work best, preferably things that taste good at room temperature.

I’m partial to small tea sandwiches stacked with onion, cucumbers or smoked salmon for the first intermission, followed by some kind of sweet bite — say, almond-stuffed dates or homemade brownie shortbread bars, for a sugar jolt — to get me through that final act. Phyllo pastries filled with anything from ground lamb and feta to butternut squash and mint, or all manner of sweet or savory hand pies, could also work well.

Then there are maki rolls, as long they’re filled with vegetables or something cooked. You don’t want raw fish sitting under your seat for the entire 100 minutes of the first two acts of “Don Carlos.”

The countertenor Anthony Roth Costanzo, who is reprising his star turn as Akhnaten in the 2021-22 season, used to bring homemade kimbap or avocado-cucumber maki to eat on a bench in the park back when he was a student, and these are an excellent option that you can either make or buy.

“I certainly picnicked a lot when I used to attend the opera as a youth,” he said. “As a performer, backstage picnicking is a whole other level of intrigue with meals that will make you sing well but not look zaftig in your costume.” (Perhaps particularly because Mr. Costanzo spends part of Akhnaten with almost no costume at all.)

Once you’ve decided which snacks to bring, you should consider the packing vessel (you’ll want something that can fit in a small purse or bag). That old plastic yogurt container may work just fine, but a cute and colorful bento box or metal tiffin container is a lot snazzier to set atop your lap. And a thin linen napkin can save your opera finery from splashes and drips.

One thing you must avoid is ever going to the opera hungry. The mid-20th century writer Joseph Wechsberg describes the consequences at the Viennese opera house in his epicurean memoir, “Blue Trout and Black Truffles.”

“Sometimes my stomach would start to make rumbling noises just as the tenor sang a pianissimo, and everybody looked at me. Some well-fed people made ‘shsh-t!’ It was very embarrassing,” Mr. Wechsberg wrote.

His response was to bring raw bacon sandwiches sprinkled with paprika to munch during the first act of “Die Walküre.”

“While Siegmund and Sieglinde sang their beautiful duet about sweet Love and Spring, the sweet scent of paprika seemed to descend, like light fog, all over the fourth gallery.”

Of course, eating in the auditorium during the opera at the Met is always forbidden, and especially now. But eat paprika-sprinkled sandwiches at the second interval, and the sweet scent will carry you most of the way through Act III.

Bernard and I once made one of Mr. Wechsberg’s opera sandwiches, though I admit that after much deliberation, we cooked the bacon before showering on the paprika, and stuffed it all in between slices of sourdough, courtesy of the fancy food shop where we worked.

We were still wrapped in our light fog of paprika as Brünnhilde fell to dreaming in her magic ring of fire, our bellies content, all our senses alert, our hearts full.

If only my past self could see what a culinary gift was passing down to future me. And an entire tier of opera patrons has been saved from indiscreet rumblings during the pianissimos.