LONDON — The theater scene here has long been celebrated for offering food for thought, but recently it’s also been likely to offer actual food. Or, at the very least, a cocktail to get the evening off to a spirited start.

The evening belongs to either of two well-established pieces of immersive entertainment in the capital. Both “The Murdér Express” and “The Great Gatsby” are theatrical confections dating back several years, and they recently reopened as part of the city’s gradual return to live performance. Those runs have now been put on hold by a second English lockdown expected to last through Dec. 2, after which both ventures say they will be back: “The Murdér Express” is then scheduled to play at its out-of-the-way east London location through Jan. 31, while “Gatsby” has extended its run at its three-floor perch in Mayfair, minutes away from busy Oxford Street, through Feb. 28. Clearly no pandemic can be allowed to get in the way of a party.

Of the two ventures, “The Murdér Express” — an acute accent has been added to pay comical reference to an imagined French location — is by some distance the less lofty. While “Gatsby,” from the adapter and director Alexander Wright, nods directly toward the classic F. Scott Fitzgerald novel, “The Murdér Express” conjoins the thinnest of plots with a (very good) meal that surpasses what you might expect from this sort of experience. It says something about the priorities of the occasion that the menu’s chef, Louisa Ellis, a 2017 finalist on the BBC series “MasterChef,” gets credit in the publicity material, while no writer or director does. (For the record, the co-writers were Bobby Lee Darby and Craig Wilkinson, and Wilkinson co-directed with Victor Correria.) 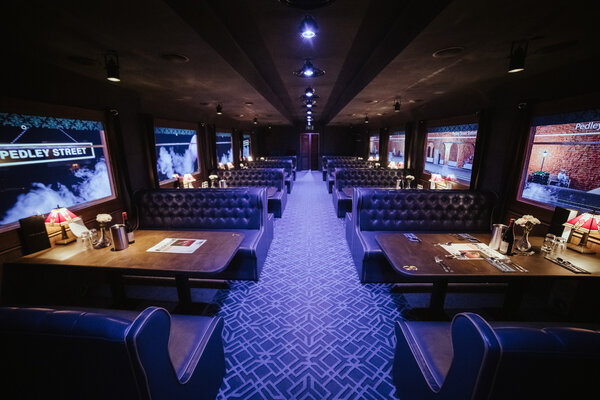 The venue can be found on a mostly deserted back street in the Shoreditch district, within a former warehouse that has been got up to resemble a railway station. (Usefully, the location’s Pedley Street address happens to be not far from two actual Overground stations within the London rail network.)

In keeping with the exigencies of our times, attendance per show has been capped at 32, with patrons separated into socially distanced booths, and any good-natured mingling that might once have been encouraged between the audience and the cast of six is off the menu. There’s “a virus plaguing the world,” or so we’re informed by the newsreel footage at the beginning of the evening, even as we’re alerted upon arrival at the platform’s Seven Sins bar to a Covid-secure “electronic internet beverage ordering platform — whatever that means.”

Very much on the menu, at least one recent midweek evening, was a four-course meal of celeriac soup, beetroot salad, braised beef and a lively buttermilk panna cotta. Potentially disruptive to the digestion is breaking news that a murderer is in our midst. The killer could be any of a motley array that includes a briskly no-nonsense conductor (Ingrid Miller), a Southern-accented collector of artifacts (Colin Hubbard) and a vampy dowager (Derek Elwood), who speaks at top volume and has eyes capable of making an onlooker quake with fear.

Memorable acting isn’t really the intended takeaway from a breezy conceit for which patrons are encouraged to show up in period garb, ready to add to the 1920s sense of occasion. I felt sorry for the murder victim, not least because he was especially chatty in the bar beforehand, and if the revelation of the killer comes as something of an anticlimax, well, much the same could be said about “The Mousetrap” — and that’s been running in the West End (apart from during Covid, obviously) for nearly 70 years.

The Immersive Everywhere take on “Gatsby” boasts its own cocktail menu and also encourages those so inclined to arrive in period regalia, ready to Charleston the night away (or as much of the night as possible given the 10 p.m. curfew that was in effect immediately before the renewed lockdown).

The challenge here is to marry the devil-may-care hedonism of one of Jay Gatsby’s parties with anything approaching the resonance of Fitzgerald’s wounding 1925 study in self-aggrandizement and spiritual depletion, which continues, for whatever reason, to exert a grip on the British imagination: In 2012 alone, there were two separate versions of the novel off West End, while in 2013 the Northern Ballet company opened a dance adaptation that remains in the company’s repertory.

To my mind, the current London production succeeds best when it lets Fitzgerald do the talking, which is to say when James Lawrence’s immediately commanding Nick Carraway, the novel’s narrator, is allowed to take charge of the play as well, often by co-opting Fitzgerald’s language. Lawrence is also among the few within a tireless ensemble who seems on top of his American accent. Too many of his castmates inexplicably lapse into Brooklynese.

In a show marked by breakaway sections when various portions of the audience are siphoned off to observe events happening in rooms tucked away elsewhere, I was impressed by the emotional intimacy achieved by Lucinda Turner’s Daisy Buchanan as she allowed four of us to bear witness to a tear-stained confession steeped in self-reproach. (Craig Hamilton’s saturnine, sunken-cheeked Gatsby isn’t nearly as compelling a presence.)

Not for the first time with stage (or, for that matter, screen) reckonings with “Gatsby,” there is a palpable disconnect between the forced jollity of the gathering as a whole and the abiding wistfulness of a book whose plaintiveness in some fundamental way remains forever out of reach. On the other hand, you can hardly blame Wright during this of all years for wanting to bring 120 people per show to their feet to join in the merriment of a song like “Ain’t We Got Fun.” Mirth has been in short supply during 2020, and under the circumstances, a shot of faux-1920s adrenaline will more than do.