Phyllis McGuire, the lead singer and last surviving member of the McGuire Sisters, who bewitched teenage America in the 1950s with chart-topping renditions of “Sincerely” and “Sugartime” in a sweet, innocent harmony that went with car fins, charm bracelets and duck-tail haircuts, died on Tuesday at her home in Las Vegas. She was 89.

The Palm Eastern Mortuary in Las Vegas confirmed the death but did not specify a cause.

Ms. McGuire, with her older sisters Christine and Dorothy, shot to success overnight after winning the televised “Arthur Godfrey Talent Scouts” contest in 1952. Over the next 15 years, they were one of the nation’s most popular vocal groups, singing on the television variety shows of Ed Sullivan, Milton Berle, Andy Williams and Red Skelton, on nightclub circuits across the country and on records that sold millions.

The sisters epitomized a 1950s sensibility that held up a standard of unreal perfection, wearing identical coifs, dresses and smiles, moving with synchronized precision and blending voices in wholesome songs for simpler times. Their music, like that of Perry Como, Patti Page and other stars who appealed to white, middle-class audiences, contrasted starkly with the rock ’n’ roll craze that was taking the world by storm in the mid-to-late ’50s.

In 1965, as the trio’s popularity began to fade, Phyllis McGuire’s image as the honey-blonde girl next door was shattered by published reports linking her romantically with Sam Giancana, a Chicago mobster with reputed ties to the Kennedy administration and a Central Intelligence Agency plot to enlist the Mafia in what proved to be unsuccessful attempts to assassinate the Cuban dictator Fidel Castro. 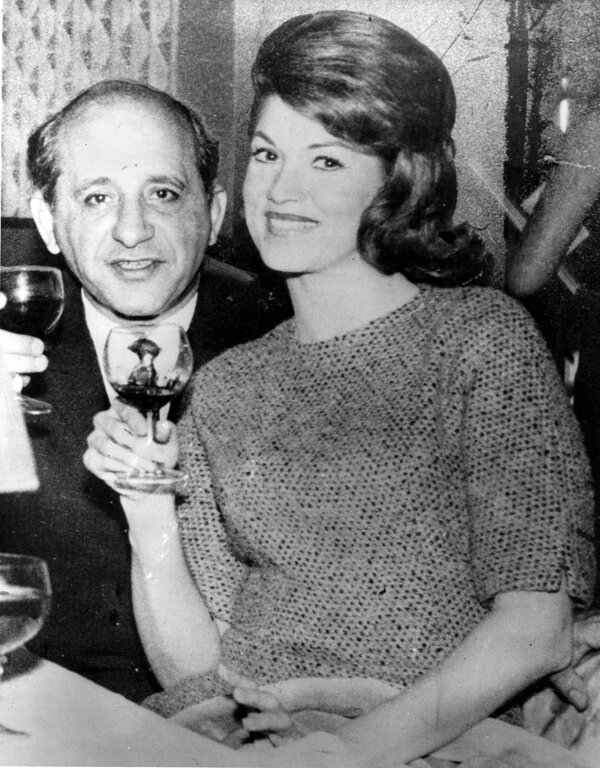 Mr. Giancana and Ms. McGuire, who had been followed by federal agents for several years, appeared before a grand jury in Chicago. He refused to answer questions and was jailed for contempt. She testified that she had met him in Las Vegas in 1961, traveled with him to Europe, the Caribbean and elsewhere and accepted his gifts in a continuing relationship. She was aware that he was a reputed gangster, she said, but insisted that she knew nothing of his underworld activities.

“It makes me look terrible,” she told reporters afterward. “It would be different if I were on my own, but I’m not a single — I’m part of a trio. My sisters and my parents — they’re brokenhearted about this.”

The McGuire Sisters retired from public appearances in 1968, Christine and Dorothy to raise families, Phyllis to continue as a soloist. She appeared regularly in Las Vegas, where she lived for the rest of her life in a mansion with a swan moat and a replica of the Eiffel Tower rising through the roof.

After serving a year for contempt, Mr. Giancana was released, and he fled to Mexico, where he lived in exile until arrested by the Mexican authorities in 1974. Deported to the United States, he agreed to testify in a prosecution of organized crime in Chicago but was killed by an unknown assailant at his home in 1975.

Ms. McGuire remained unapologetic about her relationship with Mr. Giancana. “Sam was the greatest teacher I ever could have had,” she told Dominick Dunne of Vanity Fair in 1989. “He was so wise about so many things. Sam is always depicted as unattractive. He wasn’t. He was a very nice-looking man. He wasn’t flashy. He didn’t drive a pink Cadillac, like they used to say.”

In 1985, the sisters reunited for a comeback and performed for almost two decades at casinos and clubs in Las Vegas, Atlantic City and elsewhere. They sang their own hits, 1950s pop hits and Broadway show tunes, and Phyllis did impersonations of Peggy Lee, Judy Garland, Pearl Bailey and Ethel Merman.

“They take me back to the olden times, the beautiful times,” Barbara Pattison, a fan in Toronto, told People magazine as the comeback began. “They are not loud and they are not distant. They bring back the beauty in music.”

Phyllis McGuire was born in Middletown, Ohio, on Feb. 14, 1931, the youngest of three daughters of Asa and Lillie (Fultz) McGuire. Her mother was a minister of the First Church of God in Miamisburg, Ohio., and her father was a steelworker. The sisters began singing in church when Phyllis was 4. They performed at weddings and other services, then at veterans’ hospitals and military bases.

Phyllis’s 1952 marriage to Neal Van Ells, a broadcaster, ended in divorce in 1956. They had no children. Dorothy McGuire died in 2012, and Christine died in 2019. She is survived by nieces and nephews and her longtime companion, Edward Michael Davis.

While making Las Vegas her home, for years she kept a Park Avenue apartment and then a townhouse on Manhattan’s Upper East Side.

After winning “Arthur Godfrey’s Talent Scouts,” the sisters were regulars on Mr. Godfrey’s morning radio and television shows for six years. They made the covers of Life and Look magazines and signed with Coral Records, a Decca subsidiary. Their first Top 10 hit was “Goodnight, Sweetheart, Goodnight” in 1954. “Sincerely” (1955) and “Sugartime” (1958) were No. 1 hits; they and “Picnic” (1956) each sold over a million copies.

The McGuire Sisters were one of the many white groups that covered 1950s R&B hits, many by Black artists, in what critics called blander versions though better-selling ones. They also sang for Presidents Richard M. Nixon, Gerald R. Ford, Jimmy Carter, Ronald Reagan and George H.W. Bush and for Queen Elizabeth II.

In 1995, an HBO movie, “Sugartime,” focused on the Giancana-McGuire affair, with John Turturro as the mobster and Mary-Louise Parker as Phyllis. The sisters gave their last big performance on a 2004 PBS special, “Magic Moments: The Best of ’50s Pop.” They were inducted into the National Broadcasting Hall of Fame in 1994, the Vocal Group Hall of Fame in 2001 and the Hit Parade Hall of Fame in 2009.

Long past the customary retirement years for a singer, Ms. McGuire remained passionate about her career.